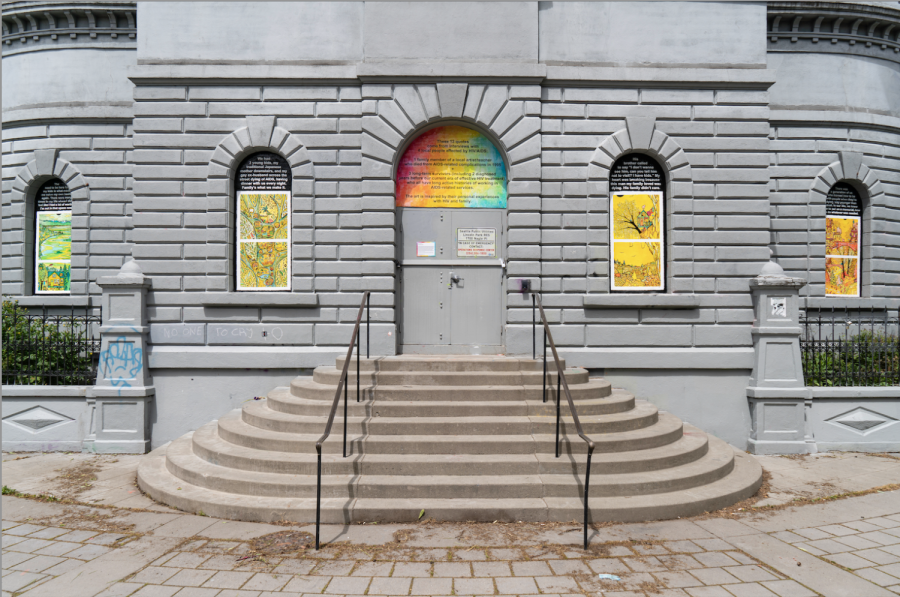 Temporary art installation in Cal Anderson by Clare Johnson celebrating pride and exploring the deep impact of HIV/AIDS. The instillation features symbolism, and quotes from four individuals about how their lives have been impacted by HIV AIDS.

It’s the first day of Pride Month—an annual celebration that commemorates the anniversary of the June 28 Stonewall Uprising, a protest that sparked a movement for LGBTQ+ rights. It was first observed in New York City in 1970 and has grown to be celebrated around the world.

For the Seattle University community and beyond, Pride Month means representation, joy, love and affirmation of who you are. It is a time of reflection and hope for a more inclusive future.

Pride Month has a rich history and remembering it is an essential part of the celebration. First-year History and Psychology double major Lucy Sartain asserted that Pride is about remembrance and emboldening yourself with your community.

“Pride to me is about the freedom to be who I am,” Sartain wrote. “I think it’s very important to remember the history of fighting and working to be seen as equal. We only have the freedoms we do today because of the brave actions of people who refused to be silent.”

Victor Evans, an assistant professor of communications, has celebrated Pride in Chicago, New York City, San Francisco, Los Angeles, Atlanta and Seattle. He finds that each Pride has its own “personality” that matches its city—NYC is the biggest, San Francisco the most political and LA all about the glitz, glam and celebrity. His first-ever Pride in Chicago resonated with him the most.

“I had the time of my life—it almost felt like a rebirth,” Evans said. “There were all kinds of wonderful things like people coming up to you and saying ‘Happy Pride! We’re happy you’re here, be glad you’re here. Be who you are.’ I will never forget that because it was the best experience ever.”

Having gone to so many Prides since his initial experience in Chicago, Evans described that the meaning changed for him over time.

“When I was coming out, it really meant an acceptance of me and to see other people like me and to feel accepted in my own skin,” Evans said. “Now when I go to Pride, it’s not so that I need it for my own identity, but I feel like I’m there for others. When I was younger, I went for my identity and validation, and now I go to represent and show I’m a part of this community.”

Representation is a huge component of Pride. Third-year Physics major Sarah Torset, the social media manager for the Seattle U Triangle Club, emphasized the importance of representation and visibility of the LGBTQ+ community, especially for queer youths.

“It’s an important form of representation for a lot of young queer people who don’t often see themselves represented in media,” Torset said. “It’s important for the progression of acceptance and love for the LGBTQ+ community from outside the community. It’s also a celebration of our own LGBTQ+ culture and history because it’s a very rich, long-standing, beautiful history and culture.”

Torset recalled coming out in 2015—the same year that marriage equality was legalized. She reflected on her first Pride the following year and what the experience was like.

“It wasn’t just a celebration of Pride, but also the rights that people had with gay rights expanding,” Torset said. “It was a really exciting time to come out, be out. It was a really nice space to just exist and feel really comfortable and safe—to fully express yourself and not feel judged.”

Finding judgment-free spaces is something that Em Wheeler, a first-year environmental studies and photography double major and vice president of the Triangle Club, has had a long journey with. She grew up in Wyoming and attended high school in Indonesia where it was illegal to be a part of the LGBTQ+ community.

“I haven’t experienced Pride Month, but I’ve had moments of acceptance,” Wheeler said. “In my hometown, there was a gender diversity picnic and that was the first experience of being in a space that was meant for transgender and gender-queer indivivuals. With the advice from my counselor in Indonesia, I did come out to my class and it was a pretty nice transition because there are a lot more open-minded people around my age.”

As a result, Pride Month is a complicated time for Wheeler as it brings mixed emotions after having struggled to find LGBTQ+ friendly spaces.

“It’s a month where I’m excited that people are being educated and I am able to have conversations and contribute to them,” Wheeler said. “But it’s complicated because growing up I was out to friends and some family, but I couldn’t be openly out to the public for safety reasons. Pride has become for me to be about acceptance, being proud and confident in yourself and your identities.”

It is universally agreed by members of the LGBTQ+ community that Pride is something that is and should be experienced year-round. Sartain commented on how that perspective is often lost by companies or stores.

“Pride Month in Texas was always a little hard because as wonderful as it is to see the rainbows in storefronts, I know the moment that the month is over they will swiftly be taken down,” Sartain wrote. “But still, seeing people vocally support the community always made me happy.”

Pride Month is both a joyous occasion and a time to honor the past as work for a more equitable future continues. It’s about LGBTQ+ love, joy and acceptance. Events will be happening throughout Seattle—with an extra reinvigoration for the times missed during the COVID-19 pandemic.