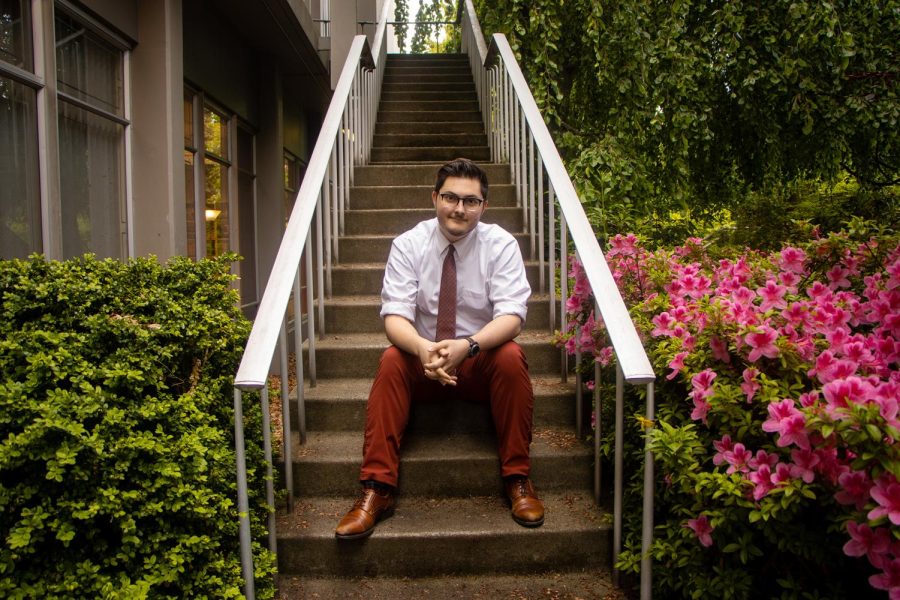 2022-2023 Editor-in-Chief Andru Zodrow outside of The Spectator office.

I have had the privilege of witnessing the incoming Editor-in-Chief grow as a reporter, editor and leader for the past three years and am beyond proud to announce Andru Zodrow as the Seattle University 2022-2023 Editor-in-Chief (EIC) of The Spectator.

From the first moment Zodrow stepped into The Spectator office, he commanded the attention of others, myself included. Seated in his slacks, button down and tie, young Zodrow scribbled notes on his notepad. He took news article after news article, then features, some back to back, eventually working his way up to managing editor and my confidant.

When Zodrow recalled his entrance at The Spectator, he described it as a similar experience to many, a bundle of nerves and excitement.

“The thing that was most exciting for me starting writing at The Spectator was that it offers the opportunity to get to know campus, politics and history better than any other method of learning about Seattle U,” Zodrow said. “By November of my freshman year, I’d already talked to our Vice President and CFO, it was really exciting to be learning about the university through covering it.”

Zodrow grew up in Spokane, Wash. consistently reading his local newspaper The Spokesman Review and listening to NPR on his way to school. He is a rising fourth-year political science and theology double major with an economics minor.

Seattle U’s identity as a Jesuit Catholic university with Ignatian values brought Zodrow to the Emerald City along with receiving the Sullivan Scholarship, which is awarded to only nine student leaders entering the university each year.

As far as his calling to journalism, Zodrow was published prior to attending Seattle U on The Financial Diet, peaking his interest in reporting and his attendance at the first Spectator meeting of the year in 2019.

From his first article, Zodrow has established a niche in his endeavor to ensure that the paper stays true to Seattle U’s religious identity and the LGBTQ+ identity of many students in the community.

“I’m queer and Catholic. So covering the LGBTQ+ community, the Catholic Church and the intersections in between them are of interest to me, in part for selfish reasons,” Zodrow said. “The reason that I’ve established those niches is one of the best things about student journalism is that you can come here to explore things that you’re interested in.”

Zodrow’s vision for the student-run newspaper consists of a two-pronged approach, where he wishes to continue my legacy (as referenced by Zodrow) of core journalistic excellence and stressing how The Spectator fits within Seattle U.

When I asked Zodrow about his greatest achievement at The Spectator thus far, he immediately responded, the opportunity to serve the editorial board. I believe this to be a true testament of his character.

“My greatest achievement at The Spectator has been serving the staff and editorial board,” Zodrow recounted. “The greatest privilege of being managing editor and transitioning into the EIC role is supporting our staff and editors. When we think of the hierarchy of an organization, we often think of it in a pyramid shape with the EIC at the top. But the way I like to think of it is an inverted pyramid with the EIC at the bottom.”

I must also note that in his time as an editor, Zodrow has been featured on The Seattle Times with peer editors at The Spectator Anna Popp and Logan Gilbert—whom he expressed gratitude towards.

“Throughout the pandemic, the really difficult work of our editorial board, including our EIC, allowed us to sustain a strong output during a time when plenty of student newspapers folded,” Zodrow said.

Most recently, Zodrow was referenced in the National Catholic Reporter for The Spectator’s coverage on the unionization of adjunct faculty at Seattle U.

The Spectator is in a unique position where the entire staff is recovering from a global pandemic that sent most back to their hometowns, forcing the newspaper to adapt to an online format. Zodrow served as a news editor and managing editor during this time and I can attest that throughout the pandemic his passion and drive never faltered.

“The pandemic was probably the single greatest challenge to journalism at large, not even just student journalism. It fundamentally changed the way that we do reporting, in some ways that made it harder to get sources because they can ignore their email or log off of Zoom. But in other ways, it also sort of leveled the playing field for students who might have had physical limitations getting to their sources,” Zodrow said. “It forced innovation and it was a painful time, but also a time of necessary growth. ”

There is nothing that Zodrow will back down from, refuse to take a crack at or dive down a deep pit of investigative research, and I have no doubt that he will make an exceptional EIC and propel the newspaper to heights it has never seen.

If you are interested in joining The Spectator for a Monday night meeting, Zodrow has a message for you.

“I want to especially encourage students who are worried about their writing abilities or who aren’t journalism or communications students to come to The Spectator and see what we’re all about. Taking just one article in your time at this university is an enormously instructive experience. We are citizens and consumers of news our entire lives, and getting a peek behind the curtain as to the way that journalists think about constructing the news that you read makes us all better citizens.”