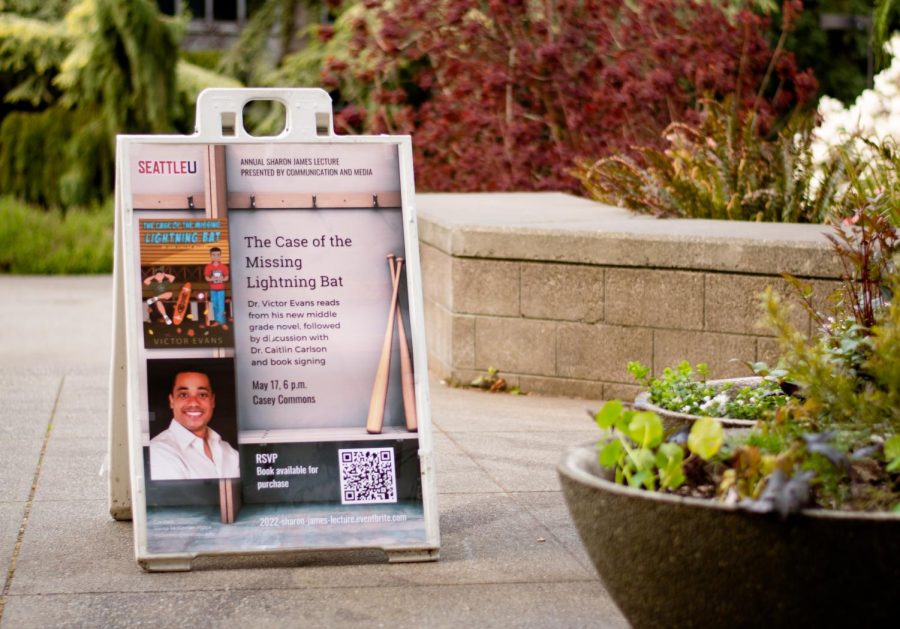 Seattle U signage outside of the Casey building for the event with Dr. Evans.

Students gathered in the Casey Commons May 17 were treated to a new middle-grade story, “The Case of the Missing Lightning Bat: An Evan Sinclair Mystery,” penned by Seattle University’s own Victor D. Evans.

Evan Sinclair is a 12-year-old boy who wants nothing more than to fit in with the “Untouchables,” the most popular kids at Lincoln Middle School. When a lucky baseball bat belonging to the star player goes missing, Evan spots his chance. With the help of his grandmother and two friends, he plans to find the lightning bat and claim his spot at the Untouchable lunch table.

Evans is an assistant professor in the Communication department who has been at Seattle U since 2015. “The Case of the Missing Lightning Bat” is his first novel, but his desire to write goes back to his early childhood.

Tripp Ceyssens, a second-year journalism student, attended the panel discussion of Evans’ novel  and enjoyed hearing what he had to say.

“I just loved his way of describing things,” Ceyssens said. “I loved to hear all of his stories—the way he describes the series of events and his writing process.”

“The Case of the Missing Lightning Bat” features a diverse cast of characters, with Evan Sinclair (the story’s protagonist) being a queer African-American boy. Evans strongly felt this was an important perspective to tell Evan’s story through, a perspective often overlooked in middle-grade literature.

Raul Lopez, a third-year strategic communications student, appreciated the character diversity in “The Case of the Missing Lightning Bat.” He hopes the story finds its way into the hands of readers who need it.

“What really stuck with me was the representation,” Lopez said. “Some kids might not be able to get a book like this that could potentially help them in the future.”

The novel includes a pivotal scene when Evan shares a kiss with another male character. While writing, Evans felt like the scene was crucially important, even when some were cautioning him against including a potentially controversial plot point.

“It felt authentic and it felt like it needed to be there,” Evans said. “Evan sort of needed it for him to truly accept who he was. I used [the kiss] as that symbol of ‘this is who I am.’”

However, the scene would give Evans trouble down the line. The novel’s distribution house, Ingram Content Group, flagged “The Case of the Missing Lightning Bat” for inappropriate content. A flag of this kind means that bookstores and many online retailers are unable to purchase and sell the book. In essence, the flag means that readers can’t easily find “The Case of the Missing Lightning Bat” at their local library or bookstore.

Evans has tried several methods to find out what specifically Ingram felt was inappropriate.

In an era where books have been increasingly dragged into America’s culture war, the Ingram Content Group’s hold on Evans’ debut novel is especially concerning. Lopez was disappointed that the distribution house flagged the book.

“I think it’s unfortunate,” Lopez said. “Not only because it’s such a great book, but I also think it’s a missed opportunity. It shows that while we are progressing, we’ve still got a ways to go.”

Evans’s first concern wasn’t for his own book—it was for authors who had been silenced in the same way.

Fortunately, Evans was able to make enough noise that Ingram issued a new ISBN number for his book. “The Case of the Missing Lightning Bat” is now free to find readers who will enjoy it.

The Case of the Missing Lightning Bat can currently be purchased on Amazon, or directly at victordevans.com.