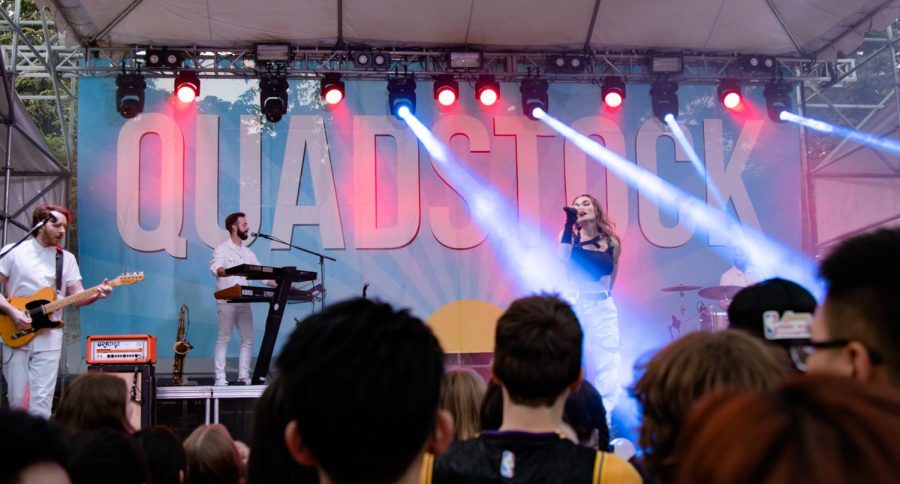 Misterwives performing on stage at Quadstock 2022.

This year’s Quadstock, the annual spring music festival hosted by Seattle University’s Student Events and Activities Council (SEAC), marked the return of two of its core features: a live, in-person concert and the on-campus Quad as its location.

In previous years, Quadstock had been held in the Redhawk Center, and last year’s edition was conducted virtually due to COVID-19. This year, there was emphasis on bringing back a sense of community throughout campus for a renewed energy to student life.

Graduate Student, Executive Director and Director of Events for SEAC Shannon Christensen explained that holding Quadstock in the quad helped navigate COVID-19 guidelines and keep everyone safe. The Coachella-meets-Woodstock inspired event is foremost about uniting students, but it’s also a chance to enjoy Seattle’s music roots and springtime weather.

“It’s incredibly important for us to be able to have this event for almost a symbolic return to ‘normal,’” Christensen said. “One of the most important things for this year’s Quadstock is to finally have the opportunity to bring all students together, post-pandemic.”

To find the right music for this year’s event, Quadstock Chair and fourth-year Madison Lane asked students about their musical preferences and the responses culminated into a “retro kickstart to summer” theme. She felt that the return of Quadstock gave them a clean slate.

“It’s the biggest event of the entire school year that SEAC puts on. It’s an opportunity to de-stress before the end of the year before finals and to meet some new people while having a good time, almost as a celebration of the end of the school year,” Lane said.

The return to large in-person gatherings is a welcomed opportunity, but also raises COVID-19 concerns. Fourth-year Theater student Daniel Anson had a fantastic time dancing and being with others, but noted hesitation.

“I was nervous about [being all together],” Anson said. “The fact that we are all Seattle U students and they only let Seattle U students in at the door and we know that all of us are vaccinated, most of us boosted, gave me confidence, but I [was] still a little nervous.”

After having limited activity at the height of the pandemic, Second-year Political Science major Braelyn Scheer was excited to experience the camaraderie on campus—especially ahead of finals.

“Honestly, I’m so stressed but this does feel like the perfect opportunity to have fun with friends before everyone graduates and leaves,” Scheer said. “It’s a really welcoming environment and it’s nice to see so many people on campus having fun and being out.”

The night consisted of four performances, kicked off by the Battle of the Bands winners, Colene and Phoebe along with the Viretta Saints. Ariel Carreño, the lead singer of the Viretta Saints,  recounted what it was like to perform and their hope that the music was able to resonate with students.

“It was super fun—the crowd had really good energy,” Carreño said. “A little nerve-wracking at first just because it was our first time playing on a stage that big and having such a professional setup. We really are hoping that we’re speaking to people and that they’re finding music relatable and fun because that’s what we love to see in musicians we listen to.”

After performances from the two winners, anticipation grew for opener Abhi the Nomad and the evening’s headliner, MisterWives. Many students who were unfamiliar with the artists became fans—showing appreciation for the artists as well as the chance to congregate by dancing and jumping in rhythm to the music.

“MisterWives killed it, MisterWives slayed,” First-year Pre-major Van Roeder said. “So did Ahbi the Nomad. After those lively performances, I am definitely a fan. I need to see them play again.”

There was a palpable sense of community in the air, much to the delight of students. First-year Nursing student Kamettii Johar enjoyed the atmosphere of the event, particularly focusing on the immersive experience it provided.

“I loved the performers and had a blast,” Johar said. “I made sure to get as close to the barricade as I could because I wanted the full experience. It was a nice, chill sunny day and a lot of people came out. I got to see new and old faces and hang out with as many people as I could.”

While they weren’t listening to music, students could participate in a variety of other events. They could take a photo at the photo booth, get a free T-shirt and enjoy food from Solamente Al Pastor or dessert from Nutty Squirrel Gelato.

Graduate coordinator for SEAC and Redzone within the Center of Student Involvement, Dream Gonzales, shared that student reactions have been mostly positive, with lots of love being given to the artists that performed. She felt the event went well considering the staffing shortages, COVID-19 guidelines and having to bring the event back to the Quad.

“Being back in-person and in the quad was something that we haven’t done in quite a bit so that has definitely been a learning experience to figure out all these pieces,” Gonalzes said. “All things considered, I definitely think this event has gone really, really well and I’m pretty proud of it.”

The 32 annual Quadstock has brought back community to Seattle U with a memorable night of music. As the end of the year approaches, SEAC still has one final event planned—a Picnic Day that will be June 1, with more details to be announced soon.