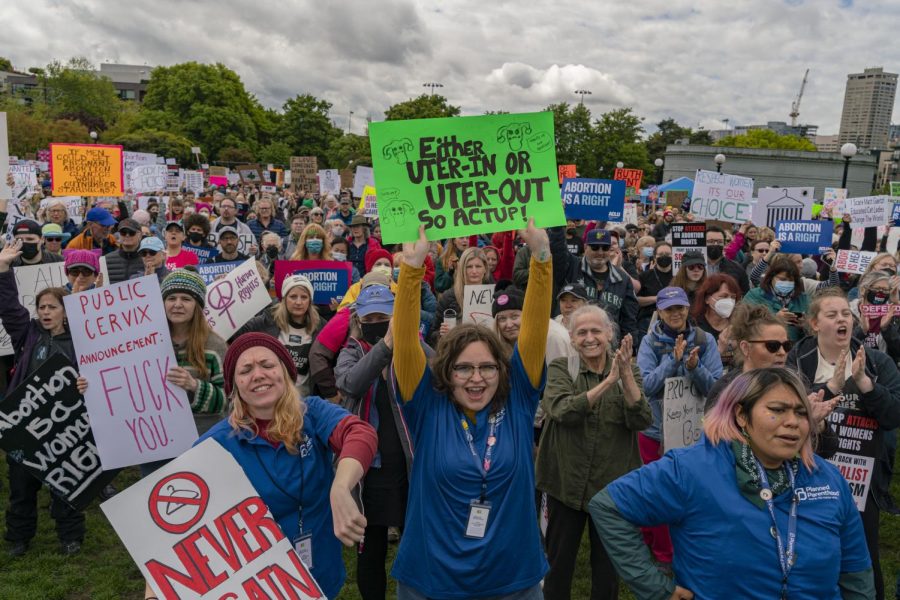 Protestors gather at Cal Anderson Park in Capitol Hill, joining nationwide protests on Saturday, May 14, in support of abortion rights.

Just over two weeks ago, Politico published a leaked draft from the Supreme Court which released the political floodgates and triggered nationwide upheaval as it thrust the topic of abortion rights to the center of nationwide discourse. The document, released May 2, suggested the possibility of overturning the landmark precedent set by Roe v. Wade in 1973. Although the leaked document was a draft, and the court has stressed that it was not a final decision, if Roe v. Wade is overturned, this would signal a nearly complete rewrite of reproductive rights and would leave states in charge of determining the legal status of abortion.

Over the past couple of weeks, people across the nation have taken to the streets to demonstrate their indignation at the possibility of a 50-year-long historic precedent being reversed. A symbolic outpouring of green clad protestors stopped traffic, walked out of classes or jobs and made their collective frustration and rage apparent. They donned green in honor of abortion rights movement, which has achieved groundbreaking reform across Latin America in recent years.

“This is completely new for me. I’ve never done anything like this. I wasn’t involved in any organizations. I’m not in any political clubs or anything. But just as an individual student, you can do a lot just by getting in contact with the right people and those people will help you, they’ll reach out,” Caulton said.

Caulton spoke to her motivation to get involved with abortion advocacy.

“What I wanted this protest to primarily be was to raise awareness for the nationwide protest, Saturday, May14, because it’s really important to get people into the streets on that day and send a very clear message to the Supreme Court that the people are willing to mobilize,” Caulton said.

Lizzie Hackett, a first-year student majoring in environmental studies and art at UW, has been at the forefront of organizing student protests. She discussed how the nationwide protests are sending a message to the Supreme Court.

“No matter your view, large groups of passionate people show how important an issue is. Ideally, lawmakers will see this dissent and rethink their actions for the good of the majority. Roe v. Wade is not overturned yet and we still have a chance to change the outcome,” Hackett said.

Across the country, high school and university students participated in walkouts, protesting and raising awareness. Jack Kuyper, a third-year communications and media major, spoke about why he was inspired to attend the nationwide protest, May 14.

“I was just really stunned and outraged by Alito’s Roe v. Wade draft—I felt like I needed to do something and a bunch of my friends went as well, which definitely made me want to protest more,” Kuyper said.

The nationwide march featured thousands of protestors across the country chanting, shouting and marching for miles. Organized by the group Rise Up 4 Abortion Rights, Seattle residents marched round-trip from Capitol Hill to Pike Place. Some carried signs saying, “Bans off our bodies” and “Overturn Roe? Hell no!” while chanting “My body, my choice” and “Hands off Roe v. Wade.”

Kenzie Lee, a second-year criminal justice student at Seattle U, spoke about the importance of protesting.

“There’s not much regular people can do to make big changes on the government level, so protesting is one of the most visible ways to show mass discontent. It’s a great visual way to show that you have a problem with something, especially if you’re not in a position to, say, donate,” Lee said.

To learn more about upcoming protests and other information, visit Rise Up 4 Abortion Rights.