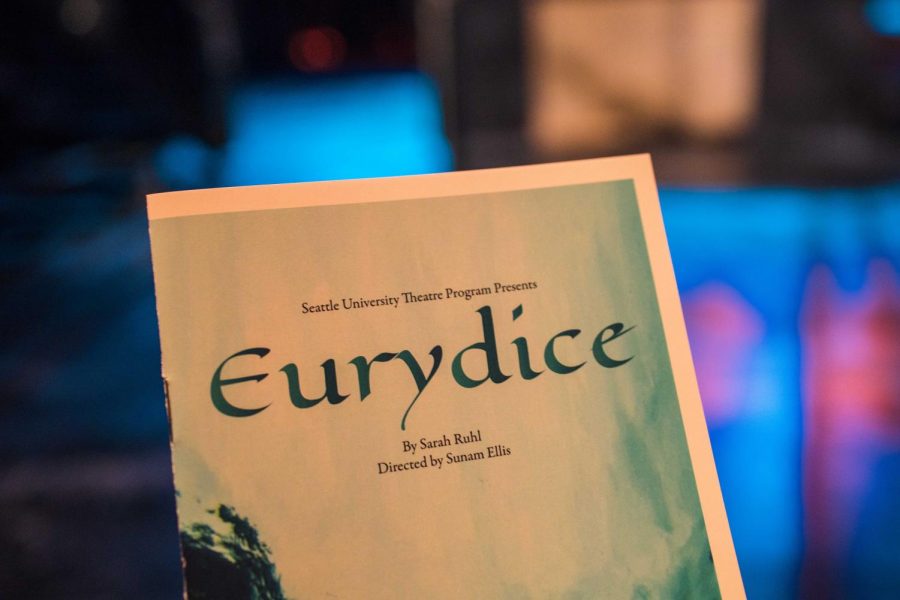 Front cover of the “Eurydice” program.

Five actors, perched throughout the set, stared unblinkingly at members of the audience. Those five played the stones, a group of sentient rocks who serve as gatekeepers to the land of the dead. “Eurydice,” the Seattle University Performing Arts department’s spring play, began the moment audience members walked through the doors of the Lee Center for the Arts.

Lia Gonia, a third-year communications and theater double major, played the lead stone, Loud Stone. She embraced the challenge of her unique role.

“I don’t think I’ve ever played a role that relies so much on movement to tell the story,” Gonia said. “The stones help set the environment—they really emphasize the difference of the underworld versus the world that Orpheus is in.”

Sarah Ruhl wrote and Sunam Ellis directed the tale of “Eurydice” (pronounced Yuh-Rih-Duh-See). In the play, Eurydice (Ariana Moore) and her fiancée Orpheus (Alex Bailey) are getting married when Eurydice is whisked away from the wedding by a creepy stranger (Isaiah Thompson). The stranger tempts her to his apartment with the promise of a mysterious letter, and Eurydice falls from his balcony to her untimely death. In the underworld, she meets her father (Chris Horton), with whom she reconnects. She also connects with the lord of the underworld (Isiah Thompson) who asks her to be his bride.

Meanwhile, Orpheus, a legendary musician, sings his way to the gates of Hell where he bargains with the lord of the underworld for Eurydice’s life. The lord offers Orpheus a deal— Orpheus must walk home without ever looking behind him to see Eurydice. If he looks behind him, Eurydice will disappear, back to the underworld. As the pair are leaving, Eurydice calls out to Orpheus, causing him to look behind him. The two make eye contact, and Eurydice is whisked away, gone forever.

Maisie Martin, a fourth-year theater major, was blown away by the quality of acting she witnessed from the audience.

The story is not traditionally framed around Eurydice. Orpheus often takes center stage in the myth, which focuses on the hero’s journey and the earthshattering final loss of his wife. Martin liked the changes Ruhl made to the story.

“[Eurydice] had a super tragic experience,” Martin said. “But people tend to focus more on Orpheus’s loss than her loss. She literally loses her life.”

Alex Bailey, a third-year criminal justice and theater major who plays Orpheus, described some of the challenges that the group encountered upon trying to learn the new story.

“We had to start auditions at the end of fall quarter. This show was originally supposed to run mid-February—it was supposed to be the winter show,” Bailey said. “But when school went online because of COVID-19 in January, it was a month of rehearsals down the drain. We weren’t getting any hands-on work or getting to be in the theater space.”

Over the course of several production meetings, they decided to postpone Orpheus. That meant they would be working on the same play for nearly half a year, which presented its own challenges.

“It definitely was difficult,” Bailey said. “We don’t work on shows for five months at a time and it was difficult to maintain our energy. If you practice it too much, it goes downhill.”

Even with all of the delays, the actors and production staff kept the environment lighthearted and were able to grow closer as a group. Gonia described the bond that formed among the “Eurydice” cast and crew.

“I really like the community and people,” Gonia said. “I feel like it’s vulnerable to put together a show and be on stage, so we got very close very fast.”

“If you’re interested in theater, definitely talk to Rosa [Joshi] or Harmony Arnold—they’ve been the most helpful in my journey,” Bailey said. “I’d probably also take some theater classes as electives and see if you like it. Most of our theater classes are taught by the same professors that work directly with us in shows.”

Bailey, Gonia and many other theater students started out inexperienced and unsure, and now they’re giving incredible performances under the stage lights. Any curious newcomer today could be a big star tomorrow.