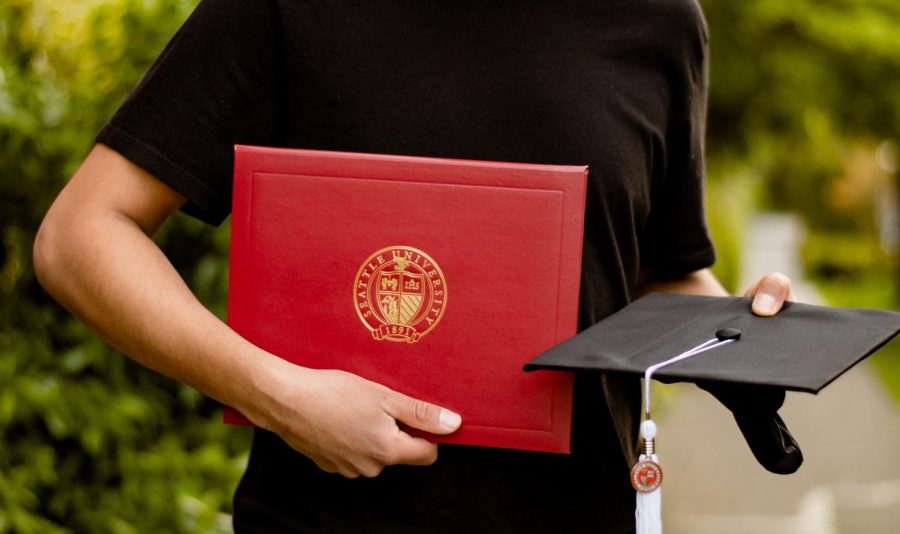 For the first time in two years, Seattle University is holding an in-person commencement ceremony for graduating students. The event will host over 10,000 members of the Seattle U community, including professors, administration, alumni, students and families, Sunday, June 12. The return of in-person commencement offers graduates and their families numerous emotional opportunities. People can pause, reflect, celebrate and inspire.

The upcoming ceremony has generated excitement for the Seattle U community for multiple reasons, one of which being the inclusion of graduates of both 2020 and 2021 to join the ceremony and walk.

Tamara Liddell, the director of Campus Ministry, noted the emotional importance of inviting previous graduates to participate in this ceremony.

“The Commencement Office’s focus is to make this a joyful experience for everyone involved, and to make up for lost milestones from the past two years as well. It’s an opportunity to really pause and take it all in before getting into the business of your other activities,” Liddell said.

Members of the Commencement Office also shared their appreciation of both the magnitude and impact of the event. Daniel Cheever, an assistant registrar at the university, echoed Liddell’s appreciation of including alumni who missed the opportunity for in-person ceremonies during previous years. He shared hopes that graduates will feel a sense of closure.

The Commencement Office and Seattle U administration also emphasized the significance of the location of this year’s ceremonies. The Commencement will be held at Climate Pledge Arena, which will be the first gathering held in the arena unrelated to sports or music.

Founded on the ambition of being the most sustainable arena in the world, Climate Pledge Arena reflects the university’s commitment to climate consciousness and environmental efforts. The ceremony will operate electronically, with guests scanning virtual QR codes instead of being handed paper pamphlets or tickets.

Liddell noted how the selection of this space for the ceremony has caused university leadership to consider the university’s celebrations through a more thoughtful lens.

“It’s a great way to rethink what is the carbon footprint of our exercises, and how we offset that. It’s helping us all think about it in a more holistic way, which has been incredibly exciting,” Liddell said.

The significance of the location extends to the Baccalaureate Mass as well, which will be held for the first time at Immaculate Conception Church. Though the university traditionally holds this ceremony at St. James Cathedral, this decision is an opportunity to focus on local community and social justice efforts.

Being the first Church in Seattle built by Jesuits and an important part of the Seattle community, Immaculate Conception holds a historical and modern significance down to its physical presence overlooking campus.

“It’s a traditionally Black parish, and our university is confronting our history of racism and becoming an anti-racist institution, particularly in the area of religion. Immaculate Conception really watches over us—we can see it every day. We need to not only acknowledge that we have this community, but work on it as well,” Liddell said.

This year’s Commencement ceremony will also include the gifting of honorary doctorates to a pair of brother Jesuits: Father Thomas Reece and Father Edward Reece. This follows in Seattle U’s tradition of recognizing social justice work done by individuals not immediately within the university community. Liddell offered insight into the significance behind both the tradition and this year’s unique recipients.

“When you are honoring somebody who is active in their respective community, you acknowledge the magnitude of people’s work for social justice through the lens of faith and Jesuit identity. It brings someone from outside of our academic community in to show our graduates what is possible and inspire them,” Liddell said.

Liddell emphasized the nature of this tradition is reflected by Seattle U students themselves, as she has never heard a speech from a graduate that did not include a focus on social justice. She sees these ceremonies as an opportunity not only for graduates to reflect on the work they have done and celebrate it, but to be inspired by others to fulfill the Jesuit mission of going out into the world.

However, the planning for the ceremonies has not gone without obstacles. One of the biggest worries for soon-to-be graduates and their families can be the mounting cost of transportation, celebration and regalia. The Commencement Office has sought to offer support where they can.

“We rely on students to donate their regalia after the event, and this year, our alumni association stepped in to help as well. Other students were provided for by their departments. If someone came forward and indicated they were having a problem with cost, there was a way in which we were able to help—we don’t want that to get in the way,” Allen said.

The Commencement office asks graduates to contribute their regalia after ceremonies have been conducted so that they may be cleaned and handed down. This helps ease some of the financial burden of graduation and reduces the total materials used by the university.

Some families raised concerns over the seating capacity of the arena. Despite Climate Pledge’s size, the inclusion of past graduates and the sheer magnitude of the event caused some to wonder if everyone would have the opportunity to attend comfortably, a concern also considered and addressed by the Commencement Office.

“We sent out a survey for folks to share what their needs were, and we had conversations with the arena about what would be available. Based on how many people had indicated that they would be attending from previous classes, we were able to determine an allotment to make sure that everyone had the opportunity for their guests,” Cheever said.

Though there were a few families who requested a number of guests that could not be entirely accommodated by the university, the office is confident that the majority of graduates will have their needs met, including students who did not respond to surveys or whose plans may change.

Some students also noted their own concerns about the upcoming ceremonies. Grace Stuewe, a fourth-year music and psychology major, shared their frustrations with some of the communication efforts of the administration.

“I heard through the grapevine that the classes of 2020 and 2021 were walking with us, but I don’t remember the administration making any official statements to us. They deserve to walk too, but I’m worried about the possibility of COVID-19 transmission and how long the ceremony might become,” Stuewe said.

Daniel Anson, a fourth-year theater major, echoed Stuewe’s sentiments. He feels as though communication and planning for the ceremony have been rushed and inconsistent, which has caused some confusion for graduating students.

“A lot of things have been up in the air. I get that it’s hard to book things out so far in advance, and things are even more uncertain with COVID-19 related changes, so I have some grace there. They’ve only been solidifying stuff within the last few weeks, so I’m not really sure what to expect,” Anson said.

Despite some frustrations, students are looking forward to the opportunity for their work throughout their university career to be recognized. Anson also sees the commencement and Baccalaureate ceremonies as opportunities to reflect on past years.

“I’m very excited for the Baccalaureate Mass with the choir and being able to showcase my honors project. Part of me is in denial that this is the end of it all, which I have avoided recognizing. I want to slow down and appreciate these things one last time,” Anson said.

Commencement is a moment to unite all aspects of the Seattle U community: administration, students, families, departments and alumni. Though the journey of putting together these ceremonies has introduced unique challenges, it also provided unique opportunities for the university to emphasize their commitment to climate consciousness, social justice and the power of community.