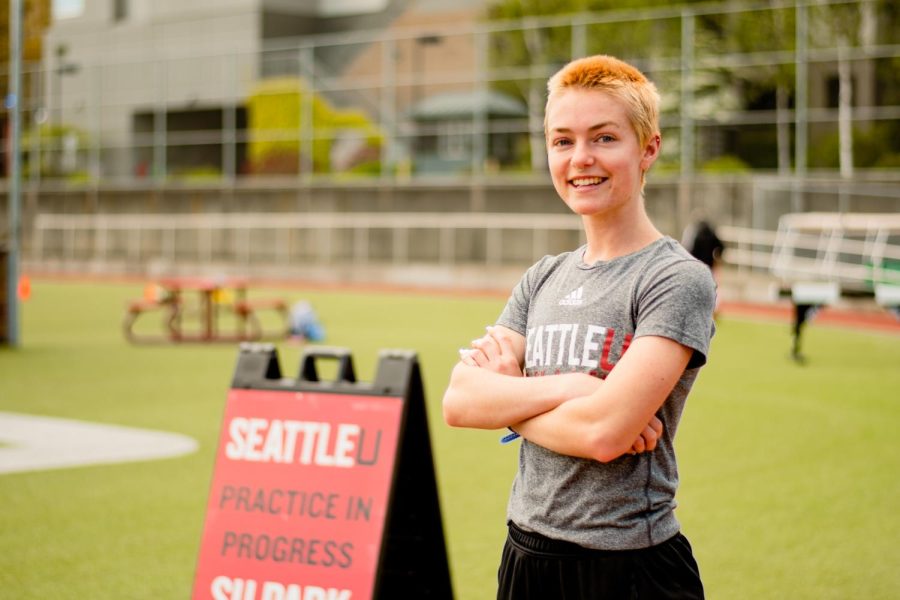 The Seattle University Track and Field team are set to host their first-ever meet in Seattle, Wash.. With the help of the University of Washington, the WAC Conference championship meet will be held at the Husky Track, May 12-14.

While not technically being “at home”, a 20-minute drive to UW’s Husky Track is a much-welcomed change of pace from the long flights the Track and Field Team makes during the regular season to compete.

Senior Business Management and Marketing major Isaiah Payne specializes in the 100 meters, 200 meters, four by 100m relay, as well as the four by 400m relay. Payne is thrilled about the prospect of being in Seattle for this upcoming meet. He noted how much of a difference it might make for those Redhawks competing, himself included.

The Track and Field team are required to travel up and down the West Coast for many of their regular-season events. This year, as in seasons past, a large number of meets the Redhawks attended were in Oregon or California.

However, this has not stopped Redhawks like Payne from setting an impressive number of personal and school records throughout the season. Earlier this year, in a meet at Oregon State University, Payne broke the school record for the 200m, posting a time of 21.47.

Other standout performances came recently at the Redhawks final meet of the regular season, The OSU High-Performance Meet, where as a team they set four top-ten marks and 17 personal records. Alongside this, Senior Tricht Jocelyn, Junior Lucas Milne and Sophomore Gus Harquail all set school records over the two-day meet.

This was the second time this season in which Jocelyn has set the school record in the 100m with a time of 11.88. This only goes to add to her tally on the year, as it marks her seventh school record this season.

In addition, Harquail broke the school record for the 3,000m steeplechase during his second time competing in the event.

Milne broke the school record for the second weekend in a row in the 110m hurdles, marking the third time he has done so this year. He has now broken five school records this season, with his two others being during the indoor season.

Maya McCabe, a junior international studies major, who specializes in the 400m, the 800m and the four by 400m relays, has been another standout performer this season. She is one of several Redhawks who have the potential to qualify past the WAC Conference Tournament and head to Regionals.

McCabe touched on the importance the upcoming meet holds for the team, and what it would mean to have fans come out and support.

“For a lot of people, it’ll be the final meet of their college careers. We have a team with a ton of seniors who are all ready to go and see if we can bring some like Seattle magic with us. In this meet, we will be able to have a lot of family and friends who can give us the support we need to perform,” McCabe said.

Oftentimes, Track and Field events are sparsely attended outside of the parents and family members of athletes. The WAC conference tournament presents one of the first opportunities for the Seattle U student body to make an appearance and show their support.

Freshman Environmental Studies major Lili Hargreaves, who specializes in distance events like the 1,500 meters, is a strong supporter of fans attending track events. Put simply, they are easy to watch and know who wins.

“It’s the person who crosses the line first, throws the thing the farthest or jumps the most … It’s pretty obvious,” Hargreaves said. “There are a ton of events to watch throughout the meet, it’s not just one thing you are coming to see and that’s what makes it so fun.”