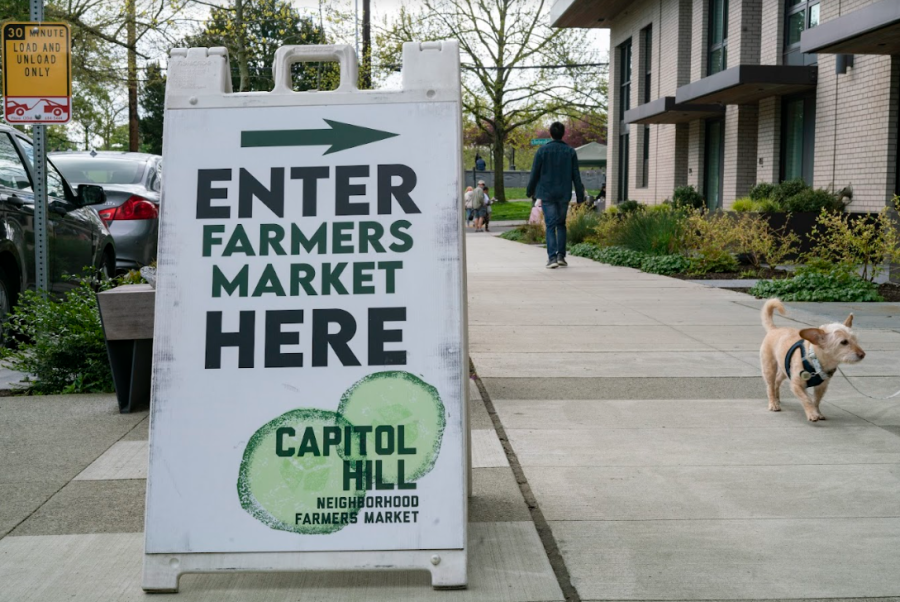 As the weather improves in Seattle, the Capitol Hill Neighborhood Farmers Market is drawing increased traffic. Since late April 2021, the market has resided in a new location near the Capitol Hill light rail station in a recently constructed plaza rather than in front of Seattle Central College on Broadway. The change in location has increased repeat customers visiting the market and has renewed a community gathering space as Seattleites prepare for summer.

Don Wardlow, who co-owns Golden Girls Honey with his wife, described poor sales at the Capitol Hill market during the pandemic before the COVID-19 vaccine was widely available in an interview with The Spectator in April 2021 prior to their location change.

“The lockdown disrupted the balance, [but] now that more people are vaccinated, I hope they come back to the markets,” Wardlow said.

A year later, the widespread availability of the vaccine and the new market location have created renewed growth for vendors.

“Sales are up 30% since we moved over here. I think that’s the difference. It’s beautiful, all of this hexagonal tile, artwork and architecture. My return customers went from 9-11% a day to about 35%, so a lot of people are coming back instead of people just walking through like they were on Broadway,” Wardlow said.

Companies that work with insects and animals cannot control the amount of product their property produces, which caused a number of problems for local farmers throughout the pandemic. As a beekeeper, Wardlow was left with a large surplus of honey due to lowered sales during the pandemic. However, he did not face the same threat of losing valuable commodities as producers of perishable goods.

“We still have quite a bit of surplus, but that’s good, because it never goes bad. It’s not a problem, it’s better to have more than not enough,” Wardlow said.

Unfortunately, for other vendors at the Capitol Hill Neighborhood Farmers Market like Carlos Lopez, who works for family owned Mariposa Farm, the pandemic meant that they faced a large financial blow and had to find ways to adapt to the sudden decrease in sales.

“We had a lot of slowdown at the markets during the COVID-19 lockdowns. Not a lot of people were going out, obviously, so we had to rely a lot more on restaurants and other businesses buying our produce in bulk. The way the business is set up is really half and half, we attend markets during the summer because there is a large seasonal market.” Lopez said.

Thankfully, with lockdowns and mandates relaxed, the atmosphere at the market has changed, exciting Lopez for the upcoming market season.

Sam Bramer, an employee at Seeking Kombucha, a locally owned and manufactured kombucha brewery located in South Lake Union, has been more than impressed with the returns he has seen at the Capitol Hill market in 2022. During the hustle and bustle of a sunny Sunday morning at the market, Bramer raved about the success Seeking Kombucha has found this spring.

“Recently, it’s really been popping off. Last week, I easily had my best margin I’ve ever worked. We sold out. Then, they came and gave me more bottles, and we sold out again,” Bramer said.

For tenured members of the Capitol Hill Farmers Market like Robin Aarons, owner of Cascadia Greens, revitalized business can be attributed to both the easing of lockdown restrictions, alongside what is an important change in location. Similar to Wardlow,  Aarons relies on returning customers just as much as new ones.

During a busy Sunday morning at the market, Aarons talked about the alternatives he was forced to turn to during COVID-19, alongside how the change in location has affected the market.

“Business has changed dramatically since the peak of the pandemic. During COVID-19, things were almost impossible. I was operating mostly through WhatsGood, which is a pre-order and pick-up program. It was all a bit sketchy,” Aarons said.

The use of services like WhatsGood can assist business owners during certain circumstances like COVID-19 when in-person transactions are not an option. However, as Aarons recognized, a large part of the reason why people choose to go to the farmers market to buy food isn’t just to support local small businesses, it is about building community.

The relationships which develop during weekly visits to the farmers market were largely lost over the course of the pandemic, but are now able to be nurtured again.

“The guy with the beard, and that lady who just came up, they were customers pre-COVID-19, and live nearby. There has been a real connection which has been redeveloped. There are always going to be changes in turnout and you might not have the same people every week or even over a year. But, overall, there have been a lot of the regulars who have been able to come back partially because of the location change, and because of COVID-19 coming to an end,” Aarons said.

Fiona Griffiths Boston, a second-year Seattle University student double majoring in Public Affairs and Philosophy, is a frequent customer at the Capitol Hill Market. Being familiar with the market changing locations from the front of Seattle Central to where it currently resides at the corner of Broadway and Denny, Griffiths Boston loves the new location.

“Being right outside the Capitol Hill light rail station makes it more accessible for people who may not have cars or other means of transportation aside from public transit. Also, now that it is adjacent to Cal Anderson, it creates a really vibrant scene of the Cap Hill community—everyone enjoying the park and farmers market together,” Griffiths Boston said.

Being an avid enjoyer of nearly all farmers markets, Griffiths Boston is uniquely fond of the Capitol Hill market given that she is a Redhawk.

“I personally love the Capitol Hill farmers market out of all of the farmers markets in Seattle because of its sense of community and proximity to Seattle U. They consistently have the best stands, whether that be Ethiopian food, tamales, mozzarella, gluten free bakery or all of the produce stands,” Griffiths Boston said.

Becky Britten, a friend of the owner of Neighborlady Cheese, located in Maple Valley, Wash., passionately summed up why people take the time to go to farmers’ markets on their Sunday mornings.

“There is a certain value to the whole concept of being able to be outside, walking around, chit-chatting with people, to get to know and understand their product. Compared to the grocery store where you are just picking out what you see and then checking out, at the market, these are people that specialize in everything that you see here,” Britten said.

About a 15-minute walk from campus, the Capitol Hill Neighborhood Farmers Market is on an upward trajectory and has no signs of slowing down. Open from 11 a.m. to 3 p.m. every Sunday, the market is constantly bustling with people from all over the neighborhood.

With the change in location and familiar faces returning, new faces may become new regulars and are bound to start being drawn to the warm and compelling atmosphere of the Capitol Hill Farmers Market.

Whether it be for honey, fresh produce, kombucha, microgreens or even cheese, the Capitol Hill Neighborhood Farmers Market has something to offer for everyone. With a sense of community that can’t be rivaled, farmers markets offer what grocery stores do not, people.