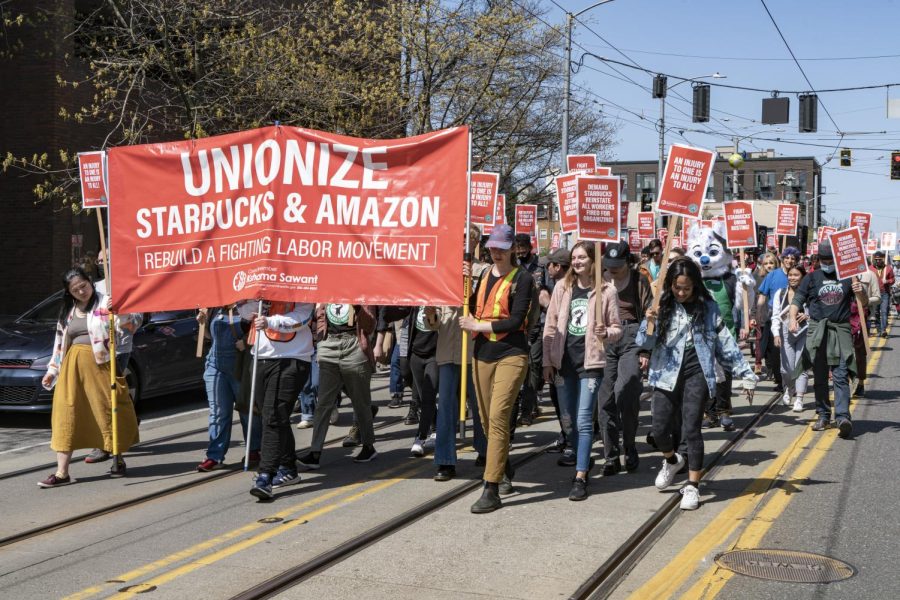 Starbucks employees nationwide recently began an energetic push for unionization with the company’s hometown, Seattle, as a spotlight for the movement. Strikes, marches and protests have gained traction in the past few weeks as “Union Strong” stickers and flyers have popped up around the city.

A Starbucks store in Buffalo, N.Y., drew attention as it became the first to vote to unionize in December of 2021. Following this initial effort, 26 stores voted “yes” to unionization, with over 100 other stores joining the conversation nationally.

Tensions are growing in the movement. On April 20, Starbucks’ announced to all their U.S. Partners that the company is filing unfair labor practices charges against Workers United. The announcement was posted on the coffee shop’s walls in locations across the country and has ignited a legal battle between the company and United States labor officials.

“The specific behaviors we’re calling out in the filing include blocking entrances and exits, making threats, yelling profanities and surrounding a store and pounding on the windows to physically intimidate and bully partners inside, in retaliation for not supporting Workers United’s organizing drive,” the announcement read.

The company’s crackdown did little to alleviate pressure from workers. A Starbucks Worker Solidarity Rally was held in Seattle’s Cal Anderson Park on Saturday, April 23. The rally featured speakers from Starbucks stores nationwide who have pushed for unionizing in their stores and Seattle City Council member Kshama Sawant.

Gretchen Waschke, a member of Seattle- based workplace advocacy community PROTEC17, was one of many non-Starbucks affiliated people who joined the protest in solidarity.

“The most powerful part of any organization—the ones who are creating the product, who are bringing in the money—are oftentimes the ones who are the most overlooked. I think that unionization allows people to come together and support each other,” Waschke said.

Katie McCoy, a Starbucks partner from Maryland, shared her experience organizing a three-day strike. 70% of union cards were signed during that period and store partners submitted a union petition to an NLRB-conducted election to be held May 31.

“Before we organized, corporate did not care about the conditions of our store. We worked through our second rat infestation in one year because corporate didn’t schedule enough people to keep up with regular cleaning tasks. I would work doubles, miss breaks and come home covered in rashes for working in the store’s conditions,” McCoy said.

Store working conditions and labor practices from the company are some of the many changes partners are hoping come to fruition through unionization. This can include physical dangers like machinery and cleanliness. Partners also claim the company has a habit of cutting employee’s hours.

Jo Cormier, who helped organize a recent strike at her workplace, echoed these concerns.

“They depend on us to beg for hours, to staff other stores, to fight each other for shifts. We need consistent hours and safety. We’ve had to use sick pay to make our rent due to not getting scheduled enough,” Cormier said.

Cormier also noted that many of the stores facing intense hour cuts are the ones attempting to form unions. After striking, her hours were cut from 35 to 12 hours per week, which endangered the benefits she relies on from the company including health care coverage and tuition reimbursement. She recounted that the combination of fewer hours and understaffing leaves employees exhausted, but still desperate to work.

Shift cuts are not the only difficulties that partners claim to face, as many cite their support of union efforts and protests as the reason for job termination. U.S. labor officials are suing Starbucks for this very reason, demanding that all workers who were fired for unionizing be reinstated.

Starbucks denies all claims of union-busting efforts, including hour cuts. In a leaked video from a conference held by Starbucks CEO Howard Schultz, he referenced unionization efforts as one of the challenges the company must face, calling it “a new outside force trying desperately to disrupt our company.” He also noted that there may be aspects of unionizing that partners “don’t really understand,” encouraging managers to not allow union pushes to dictate the culture of the company.

As this situation develops, Starbucks partners could become the leaders of a new push for unionization across the country. Depending on federal courts’ ruling on cases between Starbucks and Workers United, the movement’s momentum could either be stunted or propelled into a new norm for food service workers.

December 9, 2021: A Starbucks store in Buffalo, N.Y., became the first to vote to unionize.

March 22, 2022: The Broadway and Denny store voted to unionize, encouraging efforts from other Seattle stores.

April 1, 2022: The Starbucks Reserve Roastery in New York unionized in a 46-36 vote, becoming the first flagship store to do so.

April 8, 2022: All three stores in Ithaca, N.Y., voted to unionize, making it the first city in the country where all stores are unionized. A store in Kansas City, Mo., also voted to unionize after days of protests, walk-outs and strikes.

April 23, 2022: A store in Baltimore became the first in Maryland to vote to unionize, citing unfair wages. A rally and march was held in Cal Anderson Park for workers nationwide.