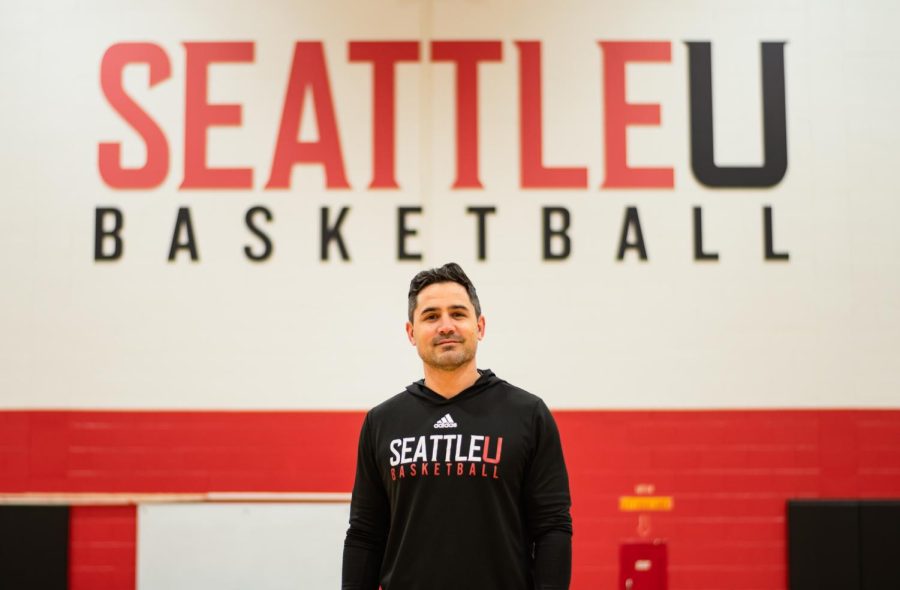 Mastering an abrupt shift in the Seattle University Men’s Basketball coaching lineup just days before the opening season game, Chris Victor worked his way from associate head coach to interim head coach before being named head coach March 1. What did not change was Coach Victor’s laser focus on serving the players and the university. The results were a rise to the top in the Western Athletic Conference (WAC), a feat not seen since the program’s height in the 1950s  and ’60s.

The interview was condensed and edited

TKG: You played basketball for Concordia, Calif. (2001-2004). How did that influence your coaching?

CV: Being a point guard, a captain on my college team and a leader in the locker room were definitely a big influence on me becoming a coach. My playing career at Concordia is the reason I coach. The experiences I had while I was a player, the lessons I learned and the relationships that I built during my years led me to the profession.

TKG: You led Concordia to a NAIA national championship. How did that help prepare you?

CV: It helped me understand the standards and the level of work needed to reach those bigger games and win. We were able to do that this year and the next step is the NCAA tournament.

TKG: Could you describe your coaching style?

CV: It is a coaching style that tries to involve everyone in decision-making and create ownership among everyone in the program. It is important for us to stay as positive as possible and to coach and play with joy while maintaining a high standard of accountability and responsibility. But at the same time enjoy the process and enjoy what we get to do every day.

TKG: Is it fair to call it servant leadership?

CV: Yes. Ultimately my job is to serve this program, serve the players and make sure the experience that they are having is positive. So they can look back on it and understand how it is a developmental part of their life.

CV: It is the ability for players to understand that they have a head coach who is invested in them not only as basketball players, but as students, members of the Seattle U community and as young men. We are trying to develop the players as a whole person. Our relationship with players goes beyond the basketball court.

TKG: How do you coach players through a slump?

CV: Part of coaching a team with a roster of 17 is figuring out what makes each individual tick. Trying to motivate each unique player is important as a coach and different for each player.

TKG: How do you prepare your players for life after college?

CV: Most of the players in our program have goals of playing professional basketball. A big piece of player development is preparing them to play professionally. We also prepare them to be successful professionals in any arena by developing characteristics that transfer to a professional career, whether it is responsibility, hard work, dedication, integrity or honesty.

TKG: In the wake of the Darrion Trammell’s transfer, what does your recruiting process look like?

CV: We are in the process of recruiting players and filling spots on our roster. It is an ongoing process throughout the year, and we’re excited about the potential of the student-athlete that we’re going to bring in.

TKG: Moving to a few lighter questions. Are there other sports that you follow?

TKG: Do you have a favorite musician?

CV: Probably Leon Bridges. My wife and I are excited to see him for the first time live this summer in Seattle.

TKG: Does the team have a go-to restaurant in Seattle?

CV: The Cheesecake Factory. The fun part about being with the team and traveling is trying new restaurants on the road.

A few days after the interview, the Redhawks added guard Paris Dawson to the roster. With new additions and a great foundation, fans can look forward to carrying the energy and momentum into next season.