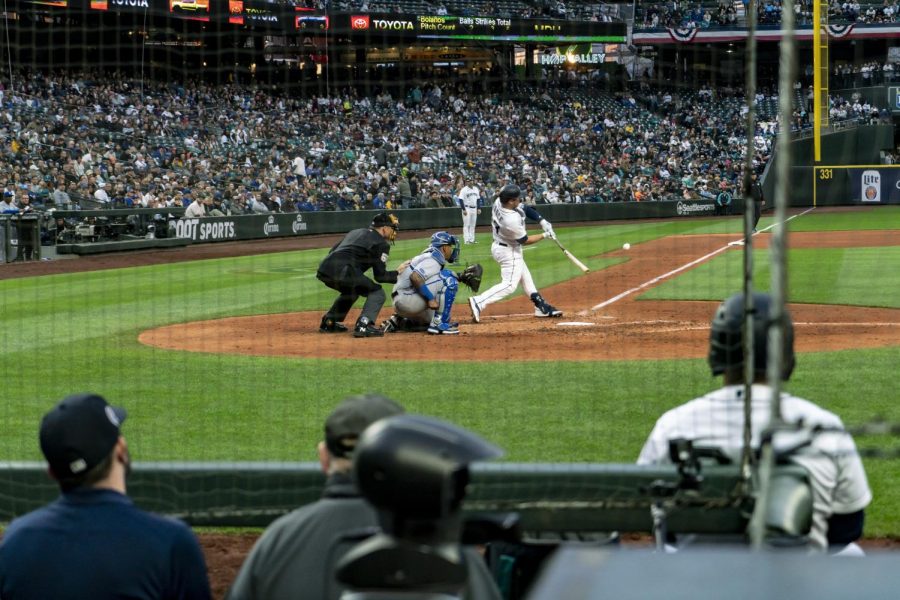 As the April 24 game between the Seattle Mariners and the Kansas City Royals entered extra innings, left fielder Jesse Winker waited patiently for his moment. In the bottom of the 10th inning, losing 4-3, Seattle needed a score to keep the game alive. Winker worked an 11 pitch at-bat and scored second baseman Adam Frazier with a sacrifice fly. Against all odds, the Mariners were still in it.

With the game tied at 4-4, the Seattle bullpen needed to keep the game tied. Right-hander Matt Koch rose to the challenge, took the hill and set Kansas City down in order. The Mariners would threaten again in the bottom of the 11th, loading the bases with two outs before Frazier grounded out.

The stadium held their collective breath as reliever Yohan Ramirez walked Michael Taylor and Ryan O’Hearn to load the bases with one out. But Ramirez would knuckle down to send Whit Merrifield down on four pitches and throw five straight sliders to strike out Nicky Lopez. The bottom of the 12th started with a walk to Ty France, which brought up Winker again. Royals pitcher Joel Payamps brought his entire arsenal to bear against Winker, who patiently fouled off seven pitches and took three balls. On the eleventh pitch, Payamps hung a slider that Winker stroked into right field, scoring Frazier (again) and bringing the T-Mobile faithful to their feet.

The game ended at 5-4. Excitement filled the stands, a welcome feeling for the long-suffering Mariners fans. Maybe, just maybe, this team is different this year.

Elliot Allen, a dad and Little League coach, is excited with this Mariners squad.

“[The Mariners] are young and fun again,” Allen said. “I remember all the days of being a kid with [Ken] Griffey Jr. and Randy [Johnson] and all of them.”

With the second-youngest roster in the MLB, the Mariners are starting to see dividends come from the latest of many rebuilds. If the cards fall right, the team could finally reach the potential that has kept Allen and others hanging on through the years of heartache.

Tito Nunez, a 13-year Seattle resident and barber in Tacoma’s Supernova Barbershop, has his eye on one specific player.

“I’m really excited to see Julio Rodriguez pop off this year. I was hoping to see his first homer tonight,” Nunez said, grinning and raising his baseball mitt.

Rodriguez is a special player that Mariners fans look to to elevate the team to the next level. At the age of 16, the Dominican phenom signed as an international free agent with the Mariners in 2017. Since then, he’s rocketed through the minor leagues, slashing an impressive .331 batting average over three seasons before making his MLB debut April 10 at the age of 21. In addition to his bat skills, Rodriguez plays a strong center field (a pivotal defensive position) and has above-average speed on the base paths. A true five-tool player, Rodriguez will likely form the backbone of the Seattle Mariners for years to come.

Rodriguez started the season slowly, but has begun to heat up in the past week. Fellow outfielders Winker and Jarred Kelenic complete one of the league’s best trios. France has been another bright spot at first base and was named American League Player of the Week on Sunday.

Fans like Tito Nunez are finding their interest in baseball rekindled by a team that seems to have a new life.

“I’m getting into baseball again for the first time in years,” Nunez said. “I watched a lot as a kid and it was kind of ingrained into everything that happened in my life. I’m Puerto Rican, I was born and raised there and baseball was just around all the time.”

April 24 was also Little League day for the Mariners. A pregame parade, special discounted tickets and a chance to see their favorite team attracted young ballplayers and their families to the park.

Lindley Barbee, a Seattle-based doctor and mom, found her way to the game because of Little League day.

“My kids dragged me out,” said Barbee. “The two older boys are in tee-ball and baseball”

The boys in question looked up, faces smeared with cotton candy and grinned. They were clearly having the time of their lives.

Allen, as a Little League coach, was grateful for the opportunity to bring his son and the rest of the team to experience a ballgame.

These Seattle Mariners are for real. There’s energy at T-Mobile Park again. And fans from all walks of life will be watching their team turn over a new leaf. For the small cost of a ticket and a short trip on public transportation, both longtime baseball enthusiasts and new fans can enjoy a day at the ballpark with one of the MLB’s most exciting young teams.