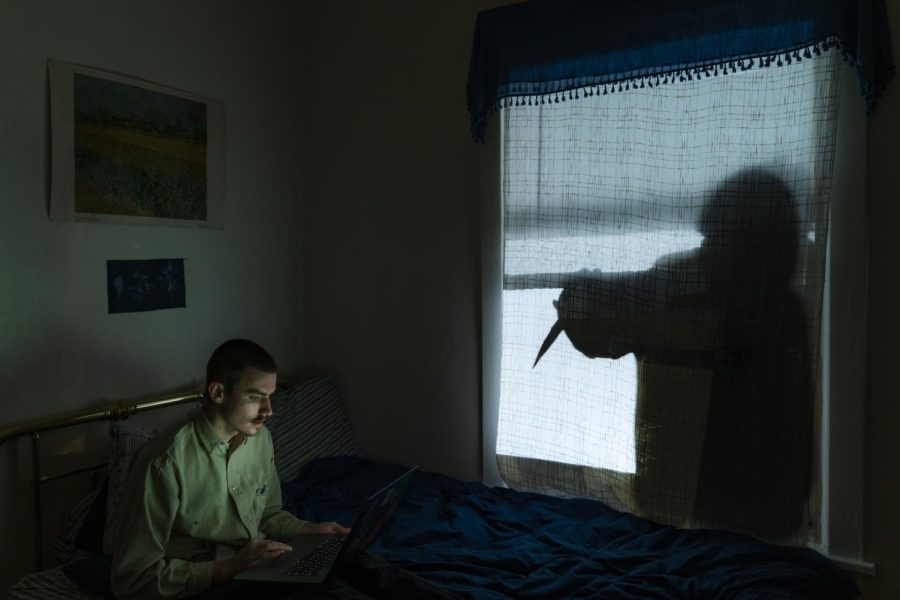 Self portrait inspired by true crime.

Binge-worthy true crime series have continued to dominate streaming services during the first four months of this year. While dramatized, audiences receive several in-depth interpretations of real life scandal, crime and tragic stories that are depicted with new insights, renewed attention and a storytelling focus.

There are an abundance of shows to choose from within the true crime genre. Con artists are at the forefront in Netflix’s “Inventing Anna” and “The Tinder Swindler.” Lying and scamming CEOs are visited in Hulu’s “The Dropout,” Apple TV+’s “WeCrashed” and Showtime’s “Super Pumped: The Battle for Uber.” Finally, there’s the more traditional true crime shows revolving around tragic murder mystery in Hulu’s “The Girl From Plainville” (currently airing),  “Candy” (premiering May 9) and Peacock TV’s “The Thing About Pam.”

If you’re looking to jump into the true crime genre, here are three series to start with. When watching, it’s important to remember that true crime portrayals are glamorized and sensationalized for the purpose of audience captivation. While it is perhaps natural to want to sympathize with the glamorized killers,  these subjects crafted images that were intended to attract others. Perhaps more than the crimes, these shows reveal that charisma is dangerous.

Where to Watch: Netflix

Tweet Length Plot: A story told in the past and present as journalist Vivian Kent looks to uncover the truth behind self-proclaimed German heiress Anna Delvy. Delvy uses social media to pose as a socialite in order to con millions from New York elites and the friends she meets along the way.

Why Watch It: It’s a project from TV giant show runner and creator Shonda Rhimes (“Grey’s Anatomy,” “Scandal” and “Bridgerton”), who always manages to find gold on the silver screen. It’s a series built on the fantastic performances of its actors and concurrent storylines. Julia Garner takes on the role of Anna Delvy and masters the voice of the year—a complex Russian, German and American accent all at once that becomes a character of its own. A mystery element surrounds the series as it progresses between the lead up to Delvy’s trial and her past being investigated by Vivian Kent (portrayed by Anna Chlumsky) who is based on the real-life reporter Jessica Pressler, who first broke the story. It’s a story of many things—the relationship between a journalist and her editors, the glamorization of the American Dream, the cultivated lies that create a perfect facade and the bias of personal perceptions.

Where to Watch: Hulu

Tweet Length Plot: Stanford dropout and Theranos CEO Elizabeth Holmes convinces investors and patients that her company can conduct any blood test from a single drop of blood—only it can’t. The show sees the rise and fall of the youngest female, self-made billionaire who defrauds Silicon Valley.

Why Watch It: There’s something compelling about Amanda Seyfried’s near-perfect performance as Elizabeth Holmes. Not only does she master the low baritone voice (the series offers a strong indication that like her invention, this was a fraud), but Seyfried captures the mannerisms of Holmes, including her wide-eyed never-blinking stare. It’s perhaps Seyfried’s uncanny resemblance to Holmes that makes the series, even with several other strong performances from Naveen Andrews and Laurie Metcalf. Or perhaps it’s the satisfaction in watching someone fraudulent fall from grace, even if Holmes is still walking the streets post-trial. (She has been convicted on four counts of fraud). It’s a series that you’ll have to watch with perspective. Is it the story of a young ambitious woman who failed to deliver, as Seyfried’s Holmes says? Or is it the story of a fraud who misled hundreds of patients with false medical results that deserved to crash?

Show: “The Thing About Pam”

Tweet Length Plot: When Betsy Faria is murdered, the blame is forced on her husband Russ. Her best friend Pamela Hupp’s ever-changing story about that night and subsequent actions lead her to become the prime suspect.

Where to watch: Peacock TV

Why watch it: This show only gets more outrageous as you watch it. Narrated by the real voice of “Dateline,” Keith Morrison, the series is a mix between a campy dark comedy and a serious, investigative drama. That thin line is navigated by Renee Zellweger, starring as Pamala Hupp, who gives an infuriating performance as the woman who kept getting away with murder…until she didn’t. The absolute miscarriage of justice in the early courtroom scenes depicting the Russ Faria’s trial for the murder of his wife, Betsy Faria, are unbelievable to the point where you want to enter the show to set the facts straight. It’s that outrage that drives the show. Zellweger’s Hupp is a true villain, one who you will be rooting against until the final and shocking conclusion.