In a World of Information Overload, Magazines Fill the Void 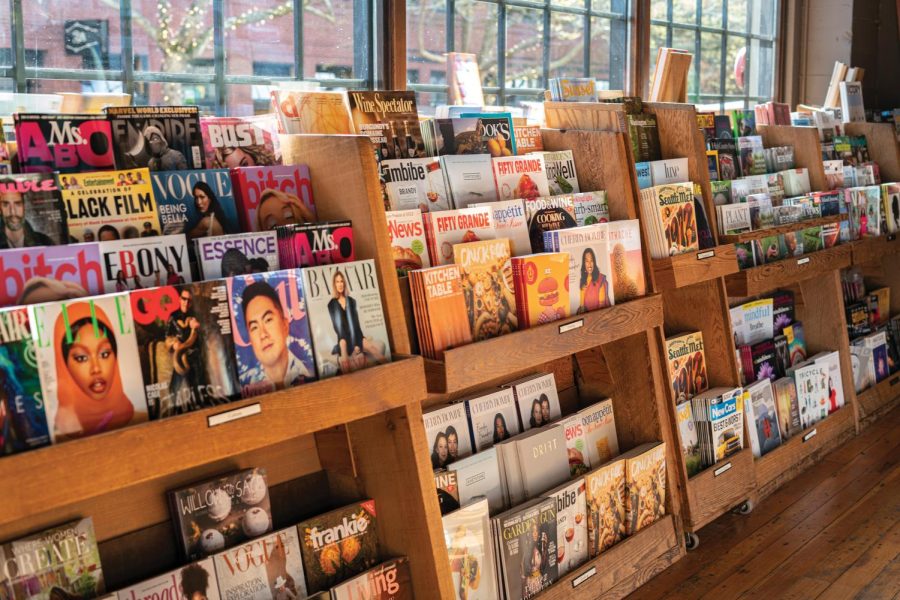 The Reading Room, located in the Seattle University’s Lemieux Library and McGoldrick Learning Commons, houses a notable collection of magazines that are refreshed daily. Taking up a large portion of the walls, they are a decoration in and of themselves.

Despite their prominent display, the magazines are rarely touched. They raise a vital question: what is the evolving role of print media in our modern world of information overload? Platforms like Twitter and Instagram dominate the ways people digest their news as convenience and quantity fulfill people’s desire for the path of least resistance.

Michael Adams, a third-year photography and design student is fascinated by the German word “Gesamtkunstwerk.” It means “a total work of art.” For Adams, magazines are total works of art.

Adams sees the realm of print media far from dead, and plans to take advantage of fertile ground with the curation of a print magazine, teaming up with two fellow Seattle U students, Claire Needs and Emma Jaber.

“It’s called Needle Magazine. It’s an arts and entertainment magazine that’s going to center around Seattle culture, but also going to fill the void of what people in Seattle are really interested in, the global fashion scene, tattoo culture and smaller artists,” Adams said. “The thing that gets people to want to read books, instead of reading on their Kindle or pick[ing] up a magazine and having it on their coffee table, isn’t going anywhere at all.”

For Adams, magazines are an important and necessary way to engage with art, interdisciplinary presenting both art and information while being novel in and of themselves.

Victor Evans, an assistant professor in the Communication and Media Department at Seattle U, began his career at Entertainment Weekly, a magazine which recently ended its print publication.

Evans shares many of the same views as Adams when it comes to the novelty and tangibility magazines offer, yet he also understands the consumer perspective which wants to consume information in the most convenient way possible.

While it made his heart sink when he heard about the end of Entertainment Weekly’s print run, he remarked that even though he didn’t read the print, it felt like the end of an era. Even though Evans loves magazines, he feels the printed versions are not currently on a great trajectory.

“Magazines, in general, have always been more expensive. But people have been willing to pay that cost because that was the only way they were going to get that information—particularly information about something that they really are interested in, in a nice, glossy, presentable finish,” Evans said.

Evans himself has fallen victim to the convenience of digitally digesting nearly all the news he reads.

“You can read a lot of these articles online. You can see the pretty pictures online, you know? I just end up reading off of my iPad, which means I don’t have to lug around six different magazines in my briefcase if I want to look at something, “ Evans said.

Regardless of portability and profit, both Evans and Adams see some growing potential in the market for magazines. Providing the reader with a certain sense of agency, a magazine requires a careful choice of what  to dedicate time towards. This is lost when someone receives their news dumped to them via social media.

“I feel like you can really engage with the materials so much more than you would be able to do in an online format,” Adams said.

The first edition of Needle will be released early June.

One of the problems with information available on the internet and social media is it can’t all be validated. In magazines, an editor has been tasked with the job of proofreading before the issue is consumable and published on behalf of a known source. The same cannot be said for every tweet or status update.

On the other hand, the same can’t necessarily be said for tabloids which rely on shock cover stories and drama to draw their readers in. Second-year Social Work major Alexis Miller has a certain fascination with 2000s pop culture, particularly the likes of Brittany Spears.

“I think a lot of the fashion from the 2000s stemmed from magazines, whether it be what was published about Britney Spears or even the moral alternative Avril Lavigne,” Miller said. “The reason I don’t believe a bunch of the stuff published by magazines, tabloids specifically, is because of what happened to Britney Spears in 2007.”

This would be the infamous shaved head incident to which Miller is referring.

There is notably a lack of tabloids in the library’s reading room, but there is also a lack of fashion and art magazines lining the walls. Adams would love to see a magazine like Needle in the reading room.

The time for printed tabloids and weekly magazines may have passed and been replaced by an online era. However, in this print media shift, there is a place left open for new magazines to be Gesamtkunstwerk, total works of art.