Athletic Director of the Year 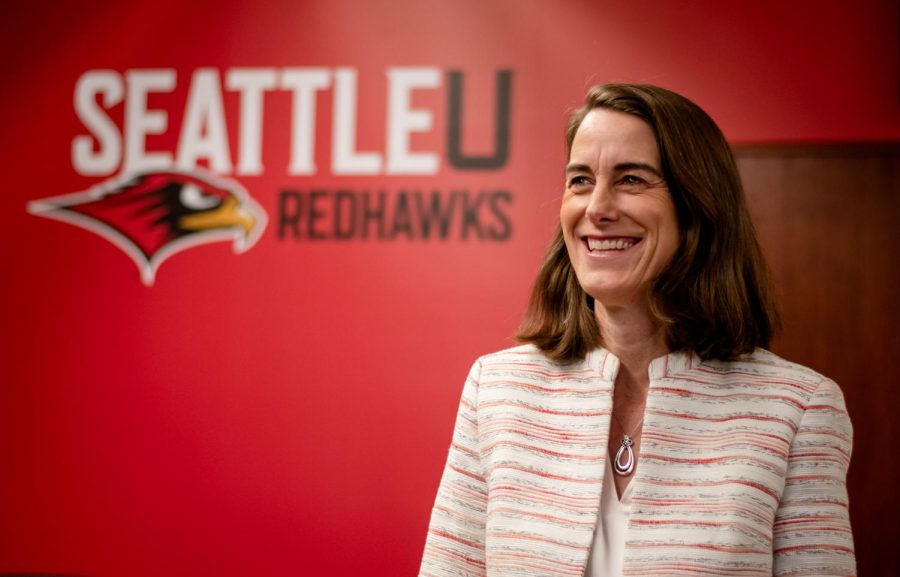 Shaney Fink, Director of Athletics at Seattle University, recently was among the few recipients nationwide to achieve a 2021-22 Athletic Director of the Year Award from the National Association of Collegiate Directors of Athletics (NACDA). This marks the first time a Seattle U Athletics Director has received the award in its 24-year history.

The Athletic Director of the Year Award recognizes directors who have demonstrated “administrative excellence” in athletics throughout the preceding year. Though this term may be broad, Fink and the Seattle University Athletic Department have made a tangible positive impact on Seattle U’s athletic environment.

“It validates the work our athletes and coaches are doing: our focus on the student-athlete experience, on community engagement, on how we are trying to create an inclusive space and on being a progressive department,” Fink said.

Fink believes in the importance of both the community and the individual. By supporting every single student athlete’s experience on a personal level, she looks to encourage a university-wide community of inclusion and care.

“We’re really focused on the student-athlete experience and making sure students have the right resources and support, and not only in their athletic aspirations. One of the focus areas is to make everything integrated into campus–how we can tie athletics into the broader community,” Fink said.

This student athlete experience is not just a concept, but a distinct approach to student wellness exercised by the department. It seeks to emulate the university’s Jesuit values, following the Ignatian path of engaging, reflecting, serving and preparing. Launched by Fink in 2020, the Redhawk Experience program (TREx) has sought to find ways to both engage, challenge and support students. This includes a new mentoring program, career preparation workshops, and a strengthened alumni network.

Christopher Fiorello, Director of Wellness and Health Promotion at Seattle U, weighed in on the unique challenges posed to student athletes’ mental health. He noted the strain that a competitive and highly demanding environment can place on a student. This can include long days of practice that start even before morning classes and end late at night, as well as the risk of burnout when putting effort into both academic studies and athletic performance.

“We have to ask ourselves how we can contribute to a person’s wellbeing and how we can utilize the resources we have to help students thrive. It can be challenging to be surrounded by a competitive culture, but the coaches here are some of the best and most compassionate,” Fiorello said.

The link between supportive community engagement and competitive athletic performance corresponds positively. Within the past few years, many of the school’s teams have achieved the status of Western Athletic Conference Champions (WAC), including the men’s basketball team that recently earned the regular-season title for the first time.

Provost Shane Martin echoed the emphasis on supporting student-athletes as people, not just competitors. The program seeks to help students achieve both athletically and academically.

“The athletics program helps to develop the whole person—that is part of our commitment in our mission as a Jesuit university. Shaney Fink and her colleagues have developed a program that helps students excel not only as athletes, but even more so academically,” Martin said.

Martin also noted how Fink’s recognition is significant in that the position of Director of Athletics is historically held by men. He remarks that Fink has championed building leadership qualities in all students through athletics, but this award particularly uplifts women who are working in a traditionally male field.

The athletics department is deeply interwoven with other aspects of the university, ranging from arts performance extracurriculars such as Seattle U’s Drumline and Dance Team that perform at events and games, to areas of study such as kinesiology that work with athletes. Fink is not only looking forward to developing the department’s programs and improving competitively, but engaging with the entire campus.

This achievement also accompanies Seattle U’s relatively recent return to Division I and rejuvenated emphasis on athletics. Throughout the recent SU Gives fundraising campaign, the Athletics Department also amassed over $380,000 in donations—the most of all of the areas of the university. Fink views the advancements and support of the Athletic Department as not simply isolated achievements, but as a reflection of Seattle U’s community and spirit as a whole.

“The athletics department is so much more than just the 350 student-athletes that compete–it’s for the community to feel like they have a home,” Fink said.

This award recognizes the efforts and direction of Seattle U’s athletic department as a whole to not only improve competitively, but to create an environment that reflects the university’s values. Fink looks forward to continuing to create a sense of belonging for students on an individual and community level.