All Around the World: Experiences from Seattle U’s International Students 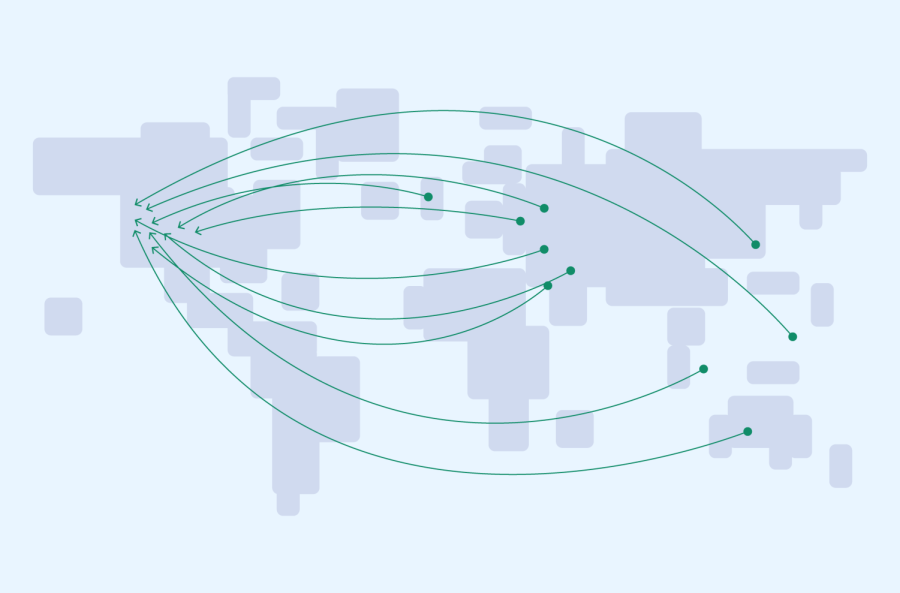 In attending Seattle University, international students consider a variety of changes and factors, including financial support, extended periods of separation from family and navigating a new culture—all of this heightened by COVID-19.

For international students, leaving home may mean something different than for American students as the unfamiliarity is even more jarring. First-year Molecular and Cell Biology major Mireia Fehr, who is from Switzerland, shared that speaking English full time is a challenge, noting that is the key to building friendships.

“I think the biggest challenge of studying abroad is finding new friends and speaking English all the time with them,” Fehr said. “I speak German, French and Spanish, and sometimes it gets really hard to stick with one language and translate all the time.”

Students originally from the U.S. sometimes struggle with the climate and environment of Seattle, with its cold winters and days without sun. For international students, the temperature change can be even more drastic.

First-year Electrical Engineering student Christian Mariano, who is from Guam, explained that while there’s much continuity in terms of the teaching style of his high school, being in a cold  and urban environment is something he’s still getting used to.

“Seattle is very different from Guam,” Mariano said. “It’s a lot colder here than in Guam where it’s pretty hot all the time. I have to wear layers outside more, which is different because usually I wear T-shirts and shorts.”

Another immediate challenge is distance. First-year Communications and Media major Clancy Bird, a native of Australia, stated that being so far away from his family is difficult, but something he’s managed with support from the men’s basketball team.

“My family is literally on the other side of the world, so even if I want to talk to them, the time difference comes into play and I have to wait ’til late afternoon before I can call my mum or dad if there’s a situation or something,” Bird said. “There are times I wish I could just go home.”

Distance isn’t always viewed negatively. While first-year Biology major Tomas Trzicky misses his family and girlfriend back home in the Czech Republic, being physically separated from them and in another time zone allows him the clarity to focus on his studies.

“It’s definitely challenging to deal with the nine-hour time change, but in a way it’s productive because most of the time that I’m awake, they’re sleeping,” Trzicky said. “Since our time is limited, I have to plan out the stuff I want to talk about and it’s good to stay in touch, but it’s also a relief to have time for yourself and your studies.”

International students still have support and community despite being abroad, most notably from the International Student Center (ISC), which helps students with a variety of processes including their immigration and visa status. The ISC also looks to help foster community engagement through events like the International Dinner.

Jun Kim, a graduate student in Kinesiology from Korea, observed that community is primarily formed from meeting people in classes and on campus from all over the world.

“I met a lot of students from all over the world and I think the best part about being an international student is that you have a group of people that understand what you’re going through, so you’re not alone,” Kim said.

Bird, who is joined by Australian teammates—Brody Nunn and Kobe Williamson—shared that there are strong bonds between international students on his team and on campus.

“When doing class introductions, I get joyful when I hear an accent because it’s cool—you can go up to them and talk about where you’re from,” Bird said. “I like to hear their story and they like to hear mine. I think that part of college is really cool.”

Within the international community at Seattle U, there are an abundance of student-athletes, who cite coming to the United States for the opportunity to compete in addition to a quality education.

Representing their home countries is a source of pride for many international students, especially those in athletics. Vasja Pandža, a second-year pre-business major who competes on the men’s basketball team, was born in Slovenia but now lives in England. When he steps on the court, he carries both countries with him.

“There’s not a lot of people from England or even from where I’m from [in Slovenia] that come to America,” Pandža said. “It’s good to just represent everyone and show people it’s possible what we’re doing … it’s representing your country but also your family.”

Third-year Business Economics major Egzi Özkan, who is from Turkey and competes on the women’s volleyball team, feels a lot of home support from family and friends. Next year, three new volleyball players from Turkey will join her on the team.

“I definitely feel that I’m representing my country,” Özkan said. “I’m aware that there’s so many young volleyball players that want to come to the States and say that I’m someone they look up to. It’s nice to get those messages and I’m really happy about that because I was one of the first players to play here and I’m really proud of myself that they’re coming because of me because I didn’t see a lot of players [from Turkey] here.”

For tennis player Liliya Dimova, a first-year pre-major, the association with her home country is different when she’s competing than when she’s in the classroom.

When COVID-19 hit, it disproportionately impacted international students, who had to navigate traveling back home in 2020 and attending school through online Zoom calls from vastly different time zones. Özkan, who normally plans her trips back home months in advance, had to book her flight home in two days.

“It happened so fast—the volleyball season was canceled and I called my mom and we just started looking for flights,” Özkan said. “It was not easy to find flights because there are no direct flights to Turkey so I had a lot of layovers and it was really expensive. It was really chaotic, but we had to find something.”

Taking online classes proved to be a test of time management for Özkan, who said that Turkey is 10 hours ahead of Seattle. Thus she had to attend classes during the night to stay on top of her studies.

When classes were announced to be virtual for the month of January this year, Trzicky stayed in Europe and traveled to Israel to see his roommate. He described having to learn online in a completely different time zone to be a “horrible” experience.

“It messed up my grades,” Trzicky said. “It was hard to feel as motivated. I did just one month online, but it was a month of not being able to 100% focus.”

For in-person classes or sports season, students had to travel to the U.S.. The ISC notes that due to a COVID-19 exception, international students are able to take all online classes abroad, retain their F-1 visa status and be a full-time student.

Entering the country has proven to be additionally arduous with COVID-19 measures in place. Pandža was unable to fly directly from England, so he had to fly to other countries and quarantine there for two weeks. It took him five flights and three days to arrive in the U.S. for his freshman year, and he hasn’t left since.

“My parents have managed to come out here, which was great,” Pandža said. “Last summer, I didn’t know whether I could go back home and be able to come back [into the U.S.] so I decided to not go home. I haven’t been able to see friends and family for an extended period of time for nearly two years and I’m excited for that this summer.”

Not going home has been a common experience for international students, who have to weigh various factors including safety, cost and whether or not the length of breaks warranted the effort. One of the challenges that many students identified was wearing a mask nonstop during travel from anywhere between 10 and 20 hours, a burden which has recently been lifted on U.S. flights.

That being said, some students—Fehr, Dimova and Bird in particular—managed to return home to their respective countries during breaks this year. This meant enduring long flights and sometimes Zoom classes that end around 1-2 a.m.. As Dimova puts it, “It doesn’t matter what you have to do, at the end of the day you’re with family.”

Third-year Marketing major Vanesa Wie, who is from Indonesia, noted that safety concerns in her country as well as the extensive travel kept her from going home.

“The traveling is tiring—getting here I flew from Japan to L.A. to Arizona and then to Seattle,” Wie said. “The flights were so full, it didn’t make me feel safe. But it’s the quarantine policy that has me wondering about going back. It keeps changing in length. I think COVID-19 is worse there than here—people are getting vaccinated but they’re still getting sick.”

COVID-19 has also opened disparities between the U.S. and other countries. Özkan said that it’s very expensive to get a COVID-19 test in Turkey, a fee that is unavoidable since tests are required before every flight. Kim noted that obtaining health care as an international student is a challenge and getting sick with COVID-19, or at all, is a worry. These concerns and barriers have been taken in stride and have only reinforced their commitment to be at Seattle U.

Being an international student at Seattle U comes with pride, of the past and of the present. As students build a new home amidst the unfamiliar, it’s the bonds of distance that unite many members of the international community. Coming to the U.S. is first and foremost, an opportunity to learn, study, and gain opportunities. But it’s also a chance to represent.