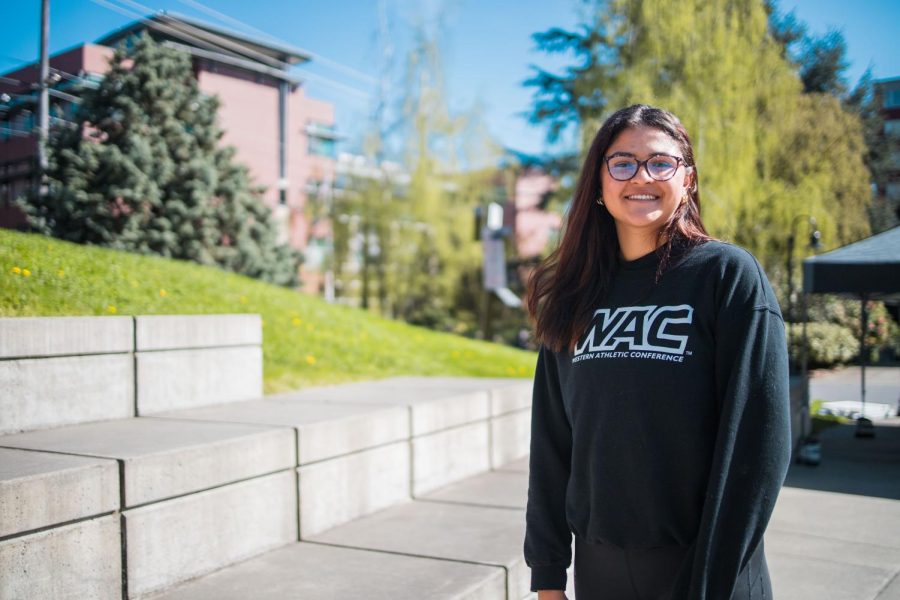 Pitcher of the week Stefanie Madrigal outside library

Stefanie Madrigal, a third-year pre-major student-athlete on the Seattle University softball team, continues to dominate opposing hitters. She earned her second Western Athletic Conference (WAC) Pitcher of the Week award this season on April 4 following her first in February 2022.

“She deserves it, she deserves all the accolades she gets,” Coach Hirai said. “She’s worked hard to come a long way with her mental and her physical health. She’s just a great competitor.”

“I’m super proud of her,” Coach Nies said. “She’s been really consistent every time she goes out to pitch. One thing about Madrigal is that she really wants to get better each time. She is always looking at what she could’ve done better and works on that in practice. She wants to keep improving.”

Madrigal’s commitment during practice has translated into a 14-5 record for the 2022 season with one save and an Earned Run Average (ERA) of 2.25. She is 5-0 in conference play with a 2.01 ERA. Madrigal cited the defensive efforts of her teammates as key to winning games.

“Being recognized is always a cool feeling,” Madrigal said. “I rely on my defense a lot and the award acknowledges them as well because I do get a lot of ground balls and they have my back. I can’t do it all myself so it is cool to see them recognized as well.”

Madrigal has now gathered a total of two Pitcher of the Week awards during her Redhawk career in addition to making first-team all-WAC last year.

The beginning of this season saw significant changes to the roster as many players graduated after last season. As a result, the development of the team’s bonding proved to be crucial.

“With so many new people, you kind of feel the team starting to come together and building their own identity as a group,” Coach Nies said.

Whether it be during a practice or game, the players have made it a habit to encourage each other.

“We usually try to bring a lot of energy to the field,” Madrigal said. “If somebody makes a good play, we’ll hype them up.”

Seattle U’s team has been facing various injuries at this point in the season.

“It’s a long season,” Coach Nies said. “It seems this year especially we’ve just been plagued by some unexpected things, but I think it’s made us more resilient. We’re just trying to take the positives out of it even though it’s a bummer when you see your teammates go out with season-ending injuries.”

Regardless, these players still show their support for their teammates.

“They’re still being supportive and cheering during our practice,” said Madrigal. “They’re still giving all they can and the team really appreciates that.”

The team is no stranger to long commutes when it comes to out-of-state games. Many players take this time to catch up on sleep, homework and spend time with each other. Coach Nies touched on how important they are for team bonding.

One thing that Madrigal and her coaches have loved is sour candies. Madrigal mentioned how games can run quite long and sometimes the team just needs to munch on snacks in the dugout.

Despite some challenges, the team continues to persevere, giving their all on and off the field.

“We’ve just got to keep building on and getting better,” Coach Hirai said. “Every week’s a struggle, every day is a struggle of just staying prepared and being prepared for what’s to come and what’s in front of us.”

The team returns from New Mexico this weekend and is preparing for their upcoming three-game series against Grand Canyon University, April 15 and 16.