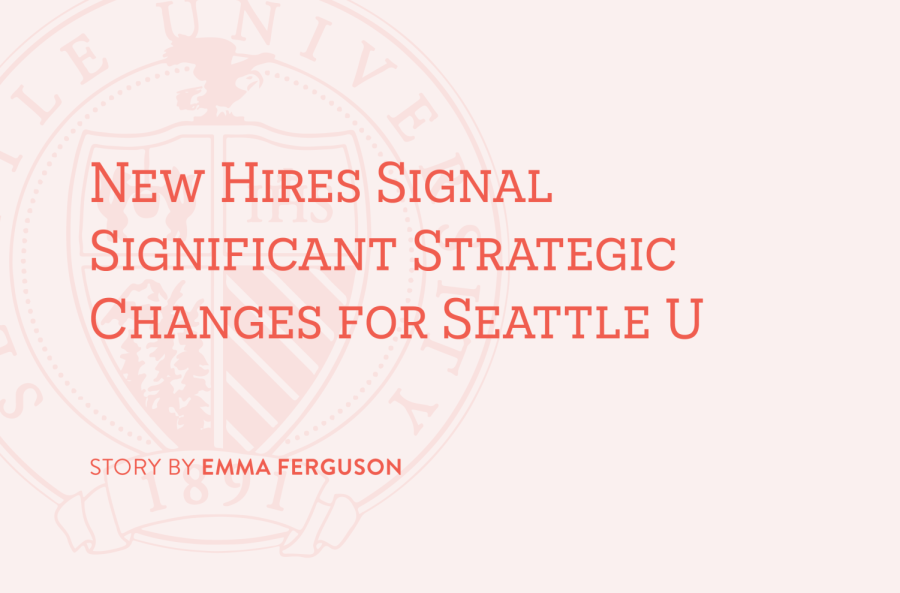 Spring has sprung and Seattle University is beginning the quarter with an array of changes in staff. The university has hired new deans for three major colleges, signaling a broader shift in the composition of university leadership which is younger, more diverse and representative of the forward direction of the university.

These leadership changes are one of many shifts in the university over the past two years, including the retirement of former university President Fr. Steven V. Sundborg, S.J., the transition to Eduardo Peñalver’s presidency and the COVID-19 pandemic. Peñalver, who has recently been traveling along the West Coast for Seattle U outreach and connection events, has brought to Seattle U a focus on “reigniting” the strategic direction of the university.

“In hiring these three deans as leaders, part of the process of recruiting, hiring and interviewing them was to have dialogue about the strategic directions, their view of it and how they could help lead and contribute to that strategic direction in each of their schools and colleges. I’m so pleased to say that all three of the deans were talking about absolutely seeing and affirming and are excited about this vision. So we are aligned,” Provost Shane Martin said.

Amit Shukla, the new dean for the College of Science and Engineering, is excited for the “unique opportunity” that Seattle U offers and to collaborate with the community and our partners outside and inside campus.

Shukla has a long history of leadership and entrepreneurship in the science field. Serving for nearly two decades at Miami University in Ohio, Shukla has remained committed to diversity and inclusion in his various leadership positions, including as founding director of the Miami University Center for Assistive Technology.

“We will have a lot of conversations when I start with the students because, in the end, whatever I have said can only work if we are 100% focused on the students’ success. So, all the decisions, all the processes, whatever we do as a team at the College of Science and Engineering has to be with the sole intention of being focused on the students’ success. And I know many people talk about it, but we will make that happen,” Shukla said.

Cynthia Dillard, who started as the dean of the College of Education Feb. 1, has a similar wealth of experience in higher education, including experience as the Chair of the Department of Educational Theory and Practice at the University of Georgia and Associate Dean for Equity and Diversity at Ohio State University.

Dillard is excited to be at Seattle U because of the homecoming it signifies as she finally returns to her home city of Seattle.

“I’ve served in three different large Research One universities primarily as a faculty person, and very specifically as a researcher and an education leader. So one of the things that Seattle U provides me is an absolute contrast to that. Private, Catholic, Jesuit, but also innovative, progressive and in my home state of Washington, in my home city of Seattle.”

With her return to her home state, Dillard brings the goal of “making good on the promise of equity, diversity and inclusion” here at Seattle U.

The new dean of Seattle U’s Law School, Anthony E. Varona has previous experience with the position, having served at the University of Miami (FL) School of Law as both the dean and the M. Minnette Massey Chair in Law.

Varona is assuming his role as dean after an abrupt ousting from his position as the law school dean at the University of Miami (UM). The controversy caused outrage in the UM community, with some students and professors alleging that Varona was fired due to racism and homophobia. The incoming dean voiced excitement at entering a Jesuit university with a values-based educational framework.

“Seattle University [holds a] values-based Jesuit identity and dedication to the rigorous pursuit of truth and justice provide a strong foundation to deliver a first-rate legal education to our students,” Varona said.

His interest in working at Seattle U was motivated in-part by the strategic direction led by the president and provost.

“I was honored to entertain other outstanding deanship opportunities around the country, but saying yes to President Peñalver and Provost Martin was easy in light of the exciting ways in which they are pursuing Seattle University’s mission, their compelling vision for the University, and the values that they are applying to their leadership,” Varona said.

There is palpable excitement from all the new hires and the administration, but the staff also has their own perspective.

Frank Shih is a professor in the College of Science and Engineering and the president of Seattle U’s Academic Assembly. The Academic Assembly has been, according to Shih, “well aware of the retirement that is coming up and the change in leadership. And there is good faculty participation in the process.”

While staff has monitored the process of leadership taking dramatic changes over the past two years, there is a general sense of excitement about how the university may change under the new administration. Russel Powell, a Seattle U law professor and Academic Assembly representative, noticed a broad optimism among university staff.

As to whether the new hires will signal a larger change in the administrative culture of the university, Shih argues that change has already begun.

“It will have to—and I’d argue that it has already started,” Shih said.

Part of the reason that these openings in administrative positions have occured is due to the “natural cycle of when it’s time to move onto something else or its time to retire,” Martin said. The retirement of the university’s previous president, who served in the role for longer than most undergraduate students have been alive, ushered in a new era at the university.

“Father Sundborg served for 24 years, that’s a long time for any president. None of us can go on forever. Dean Mike Quinn served for 15 years in the College of Science and Engineering, Dean Annette Clark served for almost as long in our School of Law,” Martin said.

This “natural cycle” was also accompanied by the trying times of dealing with the COVID-19 pandemic, the controversial resignation of Seattle U Men’s Basketball Coach Jim Hayford and retirement of the previous president, all of which happened within the past two years.

However, with the arrival of President Peñalver, the renewed strategic direction and the three new deans, Seattle U is poised to approach the future with a new sense of energy.

Provost Martin also revealed there are more changes to come in the university’s administration that are still being hired for and have yet to be announced. Those positions will include the Vice President for Mission Integration, which is a new position oriented toward the renewed strategic direction undertaken by the university.

“It is a new position that President Peñalver has created that will help bring together the different entities in the University that work on the Jesuit and Catholic mission of the University,” Martin said.

“And so when you start looking at this altogether and you see the kind of diversity that is coming into senior leadership. It’s very exciting,” Martin said.

While no one can reliably anticipate how these changes in leadership will impact the university, it is clear that President Peñalver and Provost Martin are approaching the future with a significantly restructured administrative framework.