A Fan of Fran’s: How the Cynics Inspire 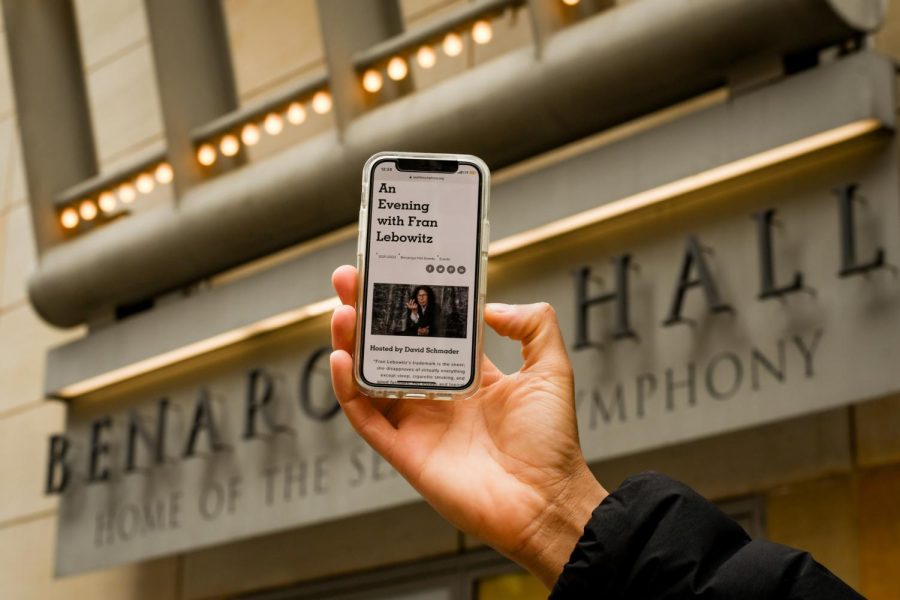 Fran Lebowitz article held before where her performance is happening: Benaroya Hall.

Esteemed writer and comedian Fran Lebowitz is often described as a cynical woman. Yet, at her Benaroya Hall appearance, “An Evening With Fran Lebowitz,” I noticed a friendliness that I don’t think she often gets credited for.

Fran is an avid reader—everyone knows that. I learned on Sunday night that she is apparently also a fond re-reader. When discussing the fate of her library after an audience member questioned where it would end up upon her passing, she laid out her plans: Three sons of three of her closest friends, all of whom love books, would have first pick. The rest, the boys would have to deal with. Something about the thought of Fran’s tremendous library being picked through at the hands of adoring readers is quite a comfort, and the forethought her choice required was endearing.

The malaise-ridden nature and begrudging leisurely ways I’ve probably incorrectly projected onto the life of Fran Lebowitz reminds me to enjoy what I like because it brings me joy, and at the same time, not care about what other people do—a repeat sentiment of hers. The particularity of her opinions, on New York or other matters of distaste, is all very personal to her. Her convictions are unwavering, not affected by the behaviors of others, unless of course you are a tourist in Times Square. Then, walk faster.

Her conviction in identifying right and wrong comes across in her self-assured delivery of the truth. When asked about her moral compass, she said the notions of the just and profane have always been obvious to her and she finds it shocking that some people don’t seem able to tell the difference. However obvious, Fran also said she doesn’t always choose the former. This was just one example of how straightforward I felt her answers were thatevening. She operates very logically and it is hard to argue with the humor that stems from her strong sense of self.

At times her delivery seems very matter-of-fact and harsh, but not in a holier-than-thou or crass way; it flows from her self-assurance and wit. She is quick with a comeback to everything, which also works well for twisting the questions she seems to not find the most interesting. Fran can answer anything without directly answering it. Some might see this as avoidant, but I think it works well in the conversations she has with the audience, allowing her to pick and choose some jokes anecdotally.

Although I wish I hadn’t watched as many interviews as I did beforehand to save some of the whimsy for the event itself, as she expresses some of the same things repeatedly, her authenticity remains in each separate delivery. That down-to-earth nature allows her to say the same things because even after all this time, her ideas still sound fresh.

And all that is what I see as the contention of Miss Lebowitz. I think people mistake her demeanor for a cynical or bitter attitude that is just the direct communication of what she does or does not enjoy. Dislike is a shared experience, loathing is common and opinions are bountiful. Hers are no different, and since they are undoubtedly more funny, I will continue to pay them more mind. Just like Martin Scorsese does.

And in case you were wondering, no she has not seen her SNL impersonation, she doesn’t watch SNL.