Mazzy Eckel, a Queen on and off the Runway 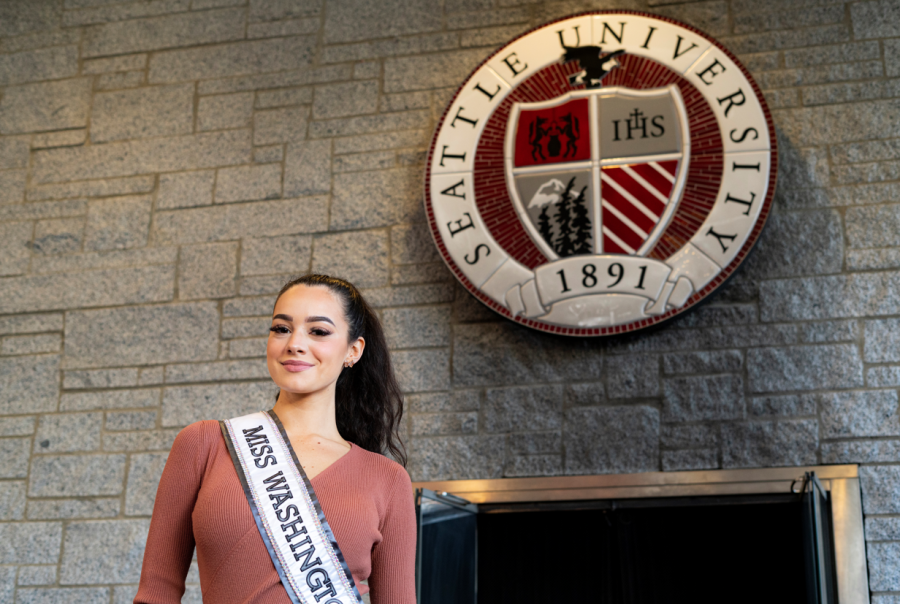 Seattle University Fourth-year Political Science major Mazzy Eckel was crowned Miss Washington at the Renton IKEA Performing Arts Center last Saturday, Feb. 12. She will represent Washington in the Miss USA Pageant at the Mohegan Sun Arena in Uncasville, Conn. this summer. Eckel has been competing in pageants for years, culminating in her coronation last week.

“Competing in Miss USA is insane. I’ve wanted this since I was 14 years old,” Eckel said. “I love that I get to bring Seattle, Seattle U and Capitol Hill with me because these are the places I love the most.”

Eckel was born in New Jersey where she competed for four years in the Miss New Jersey Teen USA Pageant. However, since she was six years old, Eckel knew she wanted to move to Washington after spending her childhood summers and holidays visiting relatives there.

“I grew up coming to Washington,” Eckel said. “Washington is my home.”

Eckel will graduate with a degree in political science this June. In the future, Eckel envisions herself working in local politics. She volunteered on James Donaldson’s Seattle mayoral campaign last summer, acting as one of his lead social media curators.

“I really would love to go into the field of campaigning,” Eckel said. “Maybe law school is in the picture in a few years, but I’m definitely focusing on getting my foot in the door for local politics.”

In addition to her work in politics, Eckel started a podcast called “Pursuing Leadership.” In the bi-weekly series, Eckel interviews successful individuals from Washington including business owners, non-profit directors, doctors and lawyers. She asks them how they attained their success and gives them a platform and audience to promote their work. While the podcast is currently an Instagram live series, Eckel is working on transitioning to an official podcast that will launch on most major streaming platforms this Friday.

“[Interviewing involves] making sure that you aren’t asking someone random questions for your own benefit,” Eckel said. “You want to benefit others as well.”

Her interview with 3W Medical, a low-cost to no-cost reproductive health care facility for women, stood out to her. After having a 3W Medical representative on her podcast, Eckel was interviewed on theirs, talking about eating disorders and promoting women’s health.

Eckel is also a model for the Seattle-based modeling and talent agency TCM. This, along with her new role as Miss Washington, requires her to stay active on social media, branding herself through posts and sponsorships.

“I don’t have an appearance every day, but I usually have something media-related, whether I’m making a post, doing an interview or physical appearance,” Eckel said.

Eckel has used her social media platform and passion for advocacy to aid victims of sexual assault. For over a year and a half, Eckel has partnered with the Genesis Project, a Seattle-based non-profit organization that provides resources and services to women involved in sex trafficking, commercial sexual exploitation and prostitution. Eckel volunteers as a fitness instructor for the program.

“I’ve been doing fitness classes with them, teaching yoga, meditation and HIIT fitness,” Eckel said. “I will be speaking as a motivational speaker at the end of the month for them.”

Her yoga class, “Breaking Chains Through Power Movements,” aims to help victims of sex trafficking reconnect positively with their bodies.

“I plan to continue [“Breaking Chains Through Power Movements”] by teaching classes and creating seminars that talk about the warning signs of sex trafficking,” Eckel said.

Eckel is not the first woman in her family to advocate for women’s rights. Her great grandmother, Rhea Eckel Clark, was the president of Cazenovia College from the mid-1950s until 1971. During her time at Cazenovia, Eckel Clark sought to improve campus life and added to the number of degrees women were able to obtain.

“She sat on a lot of New York State boards for LGBTQ rights and women’s rights back in the ’60s, which was kind of unheard of,” Eckel said. “It makes me feel like I’m carrying out her legacy.”

Eckel will be finishing her degree throughout the next year. She will simultaneously be working on her podcast, teaching fitness classes for the Genesis Project and performing her duties as Miss Washington while using her platform and brand to advocate for women.