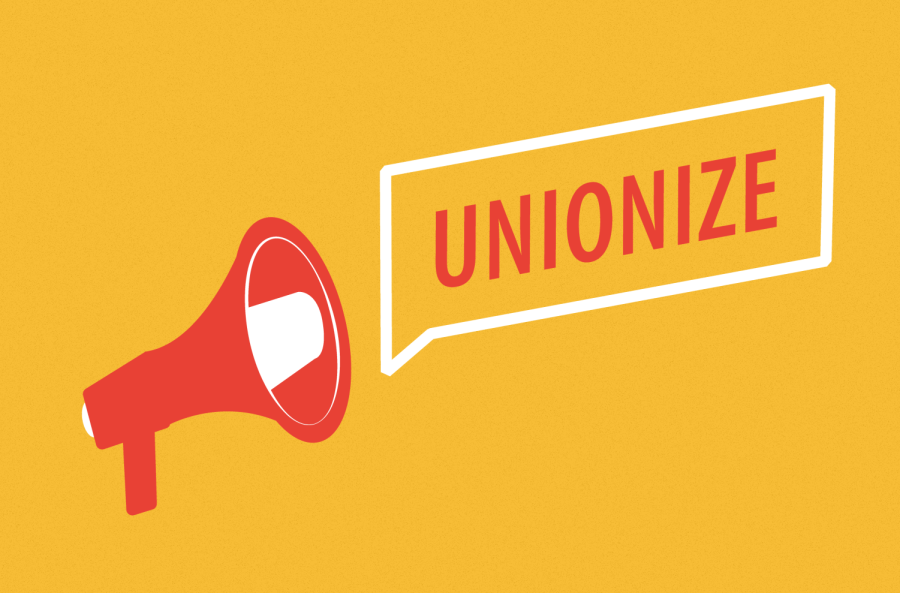 “It has come to pass that working men have been surrendered, isolated and helpless, to the hardheartedness of employers and the greed of unchecked competition.”

This quote may initially strike a reader as a contemporary critique of 21st century capitalism written by a left-wing or liberal thinker. Such an assumption would be wrong. Pope Leo XIII published this sentence in his 1891 encyclical Rerum Novarum, which began the long history of the Catholic Church’s support for labor unions.

Clayton Sinyai, executive director of the Catholic Labor Network, an organization based out of Georgetown University that promotes Catholic social teaching around labor unions, illustrated the deep roots of Catholic economic justice activity.

“Modern Catholic social teaching really began around the question of labor and treatment of workers by our economy. It began in the industrial revolution, as the Church was looking at the changes in the economy, where you had a small number of owners and a large number of workers who were increasingly impoverished,” Sinyai said.

The financial hardship and affronts to human dignity which occurred during the initial years of industrialization had profound consequences for the Church and its relationship to the world, in an era in which capitalistic productivity overruled the well-being of the poor. Rerum Novarum was the Catholic response to a world which had embraced human expendability.

“Included in teaching were some key principles. One, that every worker deserves a living wage—a wage capable of supporting themselves—and if the market economy was not delivering that, then society had to step in. It also put the Church on the side of the workers organizing and labor unions. It endorsed the right of workers to organize and, in fact, encouraged more workers to form associations,” Sinyai said.

When Seattle University adjunct faculty attempted to unionize in 2014, they hoped that the Jesuit institution would treat their effort as a legitimate attempt to administer Catholic social teaching on campus.

Ben Stork, an adjunct professor who prefers the title lecturer, began at Seattle U in 2014 when SEIU 925, a Seattle labor union, was already in progress.

“One of the things I do in classes is ask students not to call me professor, because that’s a university rank that comes with a particular relationship, a job, permanence,” Stork said. “I like to highlight that not everybody who stands in front of students has exactly the same relationship to the university, even though sometimes the university seems to like to encourage students to think of us all the same.”

The SEIU had already collected cards and submitted for National Labor Relations Board (NLRB) recognition when Stork joined the movement. He mentioned that one of the slogans in the academic labor movement is “working conditions are student learning conditions” because the benefits Seattle U faculty and staff bargained for would help improve education for everyone by ensuring stability for faculty and students.

Seattle U took the opposite route. After adjuncts voted to unionize in 2014, the university appealed to the NLRB, and argued that the school’s status as a religious institution gave the school autonomy from federal labor oversight. The NLRB approved the union in 2016, but Seattle U vowed to take the fight all the way to the U.S. Supreme Court.

Michael Ng is an adjunct professor in the History Department and member of the University Non-Tenure Track (NTT) Committee which focuses on matters of importance to NTT/term faculty. The committee serves as an umbrella for adjuncts, part-time and full-time non-tenure track faculty.

Ng gave his thoughts on the lack of resolution for adjunct faculty and named other Jesuit universities who host unions, referring to President Emeritus Stephen V. Sundborg S.J.’s argument against unionization based upon Seattle U’s status as a Jesuit Catholic school.

“You have Georgetown, which is Jesuit and has unionized, you have the University of San Francisco, which is Jesuit and unionized, and so how does it work?” Ng said. “I don’t know if we ever got a satisfactory answer from Father Sundborg—I went to the hearings, I was one of the people examined at the hearings. So where does this go? I don’t think that’s ever been resolved.”

Sinyai, whose organization is affiliated with Georgetown, reaffirmed the university as an example of how Jesuit institutions can lead the way in respecting the collective bargaining rights of adjunct faculty.

“Georgetown responded much more to the call of Catholic social teaching than most that I’ve encountered, they wanted to be exemplary,” Sinyai said.

In 2018, the adjunct faculty decided to drop their unionization attempt, citing their worries that the Supreme Court’s conservative majority could put a dent in collective bargaining rights if the case went to the federal judiciary.

“Given how exhausted we’d all become and then the threat that if we were to go forward—a suit was actually filed in the DC circuit court—frankly, the SEIU was themselves both exhausted and also financially very worried about what the future looks like, with a almost overtly anti-labor President coming into office,” Stork said.

Theresa Earenfight, professor of History and director of Women and Gender studies is a tenured faculty member who consistently voiced support for the unionization efforts, touched on the failure.

“I do remember feeling incredibly demoralized when it failed and I know why it failed,” Earenfight said. “First, because Father Sundborg opposed it vehemently. Second, the union could have appealed again, but it was 2018 and Trump had just won. There were two seats coming up on the NLRB and he was sure to appoint someone who is anti-union, so the SEIU decided that it was not a battle we were going to win.”

The anti-union efforts occurred under President Sundborg. Whether a second unionization effort would be treated differently by President Eduardo Peñalver remains to be seen.

Sinyai has observed a pattern of failed initial unionization attempts before a collective bargaining break-through.

“It is all too common for it to take several attempts at organizing before a group of workers is successful,” Sinyai said.

Whether the fervor for a second unionization attempt exists on campus currently is a matter of conjecture, but certain campus leaders seem more open to the possibility than in 2014.

Provost Shane Martin, who entered his position in July of 2018 and had no input on the adjunct faculty unionization efforts, did not speak for the president, but did reference Catholic social teaching on labor.

“I’m not in a position to speak for President Peñalver on this, but I would say that Catholic social teaching has a long and consistent record of supporting the rights of workers and labor.

My hope would be that at Seattle U, we can create an environment where we can enhance and improve the lives of our faculty,” Martin said.

As the cost of living in Seattle rises, collective bargaining activity amongst university faculty members is heating up across the city.

On Feb. 7, the AFT 1789, the union representing the faculty of the Seattle Colleges system, held a rally ahead of negotiations for faculty wage increases.

Annette Stofer, the AFT 1789 district president, underscored the grassroots nature of the rally.

“A group of members who have been really energetic and well organized are the ones who get to take responsibility for the rally,” Stofer said.

Adjunct faculty across Seattle are feeling the pressure of increasing costs of living and the financial burden imposed by the COVID-19 pandemic, which has spurred a renewed collective bargaining push.

“Within the State of Washington, we know that King County is very expensive, and it’s becoming too expensive for folks like faculty because the salaries aren’t high enough. Pierce County and Snohomish County are next in line and are also very expensive,” Stofer said. “If we want healthy colleges, if we want a diverse faculty and if we want to be able to serve students well, then we need decent salaries that allow people to live here in a middle-class existence that faculty deserve.”

The same rising costs of living and financial pressures affecting Seattle Colleges faculty are impacting adjuncts at Seattle U. However, the university’s previous efforts have put professors at a disadvantage at the bargaining table.

“You’re asking us to do a lot and eat into our personal time or family time, but we’re not seeing a lot of respect,” Ng said. “People want access to things like better offices. In some cases, in some colleges, we don’t even have an office and we’re holding office hours in Starbucks or in a borrowed office. Again, it’s hard to feel valued.”

Ng stated that he feels the newer administrators are more open to the conversation surrounding faculty rights and can help aid the university-wide conversation. He believes the union movement helped spark this because he’s unsure if the previous president and provost understood how frustrated faculty and staff were feeling.

Earenfight addressed individuals who may be wary or opposed to the idea of a union at Seattle U.

“Some people also think the union demeans the academic integrity of the university, that it makes us on par with other workers, to which I say no, that is not true. It merely guarantees us the right to fair employment practices,” Earenfight said.

The conversation surrounding adjunct faculty unionization subsided in 2018, but the underlying tension between Catholic social teaching and the previous actions of the university remains.

“What does it mean to educate the whole person when you’re a part-time faculty member?” Stork asks.