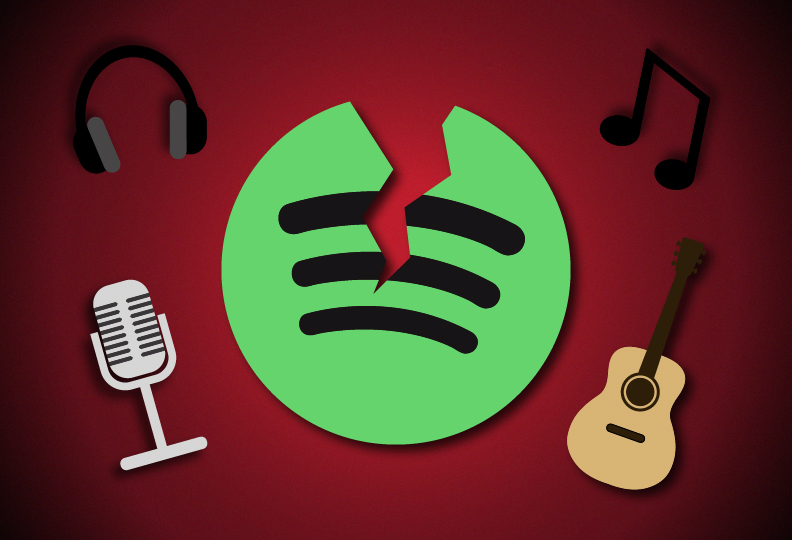 Have you heard? Some of Joe Rogan’s latest podcast guests have shared curious musings on the current political climate, alternative remedies to COVID-19 and other highly contested public opinions. As a result, Spotify has come under fire after the eruption of discourse which ensued.

Neil Young and Joni Mitchell removed their entire musical catalogs from Spotify, refusing to share a platform with Rogan’s controversial COVID-19 comments. While some users may be upset that they can no longer listen to “Heart of Gold” or “River” on their streaming platform of choice, the reality of this debacle is much messier than just hot gossip.

Seattle University Fourth-year Computer Science major Zach Holly has been monitoring the situation from the moment it kicked off.

“My Twitter feed tends to lean more toward technology content and politics,” Holly said. “So the moment [the news] broke, it was being talked about, at least in my spheres.”

To Holly, Rogan has been pushing—and occasionally crossing—the boundaries of what is and is not appropriate for streaming platforms for quite some time.

The prevalent conversations on the matter keep circling back to responsibility. Critics like Holly think that the sheer breadth of his reach and the social credibility his podcast provides undermines Rogan’s attraction to naivety.

“Joe Rogan has a huge support staff at this point,” Holly explained. “[The guest] is vetted, their content is vetted, their friends are vetted and they’re given a list of [conversation] topics. There is no way anyone walks in on that show completely blind in any regard.”

Although much of the current debate surrounds COVID-19, this is only the latest trend in a longstanding history of virtual media platforms pushing users toward increasingly radicalized content to prolong user engagement. Caitlin Carlson, an associate professor of communications at Seattle U, discussed her observations of this phenomenon with others who share her expertise.

“A lot of academics, myself included, have for years been saying that algorithms amplify extreme content, keep us on the platform longer and add to this division, this dis and misinformation,” Carlson said. “It happens on YouTube, it happens on Facebook and obviously Spotify is ancillary to those conversations.”

As private companies with independent agendas, Spotify and other media platforms are currently free to disregard the constitutional right of freedom of speech which applies to other forms of public speech.

“The First Amendment doesn’t really apply on social media,” Carlson explained. “A lot of people aren’t clear on the difference between private content moderation online versus government censorship. It has nothing to do with what we do in these private, virtual spaces. I think people forget they agreed to a ‘Terms of Service.’”

A subsidiary of Universal Music Group, Spotify is one of several new media platforms that are actually owned by the music industry’s perennial giants. As a publicly traded company, Spotify’s main responsibility is to its shareholders, even when their actions cause frustration to some consumers and observers.

“[The streaming industry] doesn’t incentivize content moderation,” Holly said. “They’re financially incentivized to drive you toward content they’re making. There’s a moral responsibility: if you make a piece of technology, it’s your responsibility at the end of the day [to moderate]. Add the six degrees of separation: the people who made Spotify weren’t the ones who recruited Joe Rogan to sign a $100 million contract, but the buck has to stop somewhere.”

Breaking away from the industry standard, some of Spotify’s competitors are taking up more active roles in monitoring the content on their platforms.

“Other podcasting services definitely moderate more than Spotify,” Holly said. “I guess it’s a company culture: if the company wants to be that beacon of ‘no censorship’ and attracts all types of content, that’s on them.”

Creators like Rogan have amassed immense audiences through spikes in engagement due to radical talking points. Formerly a fan of his podcast, Third-year Psychology major Eden De Ranieri explained where Rogan allegedly misstepped.

“He started off as just an endearing meathead who really let the interviewees shine,” De Ranieri shared. “It wasn’t until alt-right politics had morphed into something so sensationalizing and entertaining that Rogan seemed to fall off the boat to me. Rogan’s podcast leaned more and more into strange identity politics. Topics like trans athletes in high school sports and trans women using public bathrooms were unnecessarily brought up. And now it’s gotten to COVID-19 conspiracy theories. Once I was able to talk about these things with people who actually had different views and grew up a little more, I was able to realize how ridiculous it all is.”

Now almost a month after Neil Young removed his music from Spotify, the streaming platform finally caved to public backlash over Rogan’s podcast. In addition to prefacing episodes with information disclaimers, Spotify took down 70 of Rogan’s podcasts for their ‘harmful content.’.

“Ultimately, Spotify’s been able to recognize what Rogan cannot seem to grasp,” De Ranieri said. “Learning about ‘controversial’ topics should be encouraged; but it’s when those views are put at equal footing with the general consensus that it becomes dangerous.”

In a world where lies are often more exciting than the truth, companies will continue to struggle with the proper balance between providing a platform for speech and the moral repercussions of misinformation.