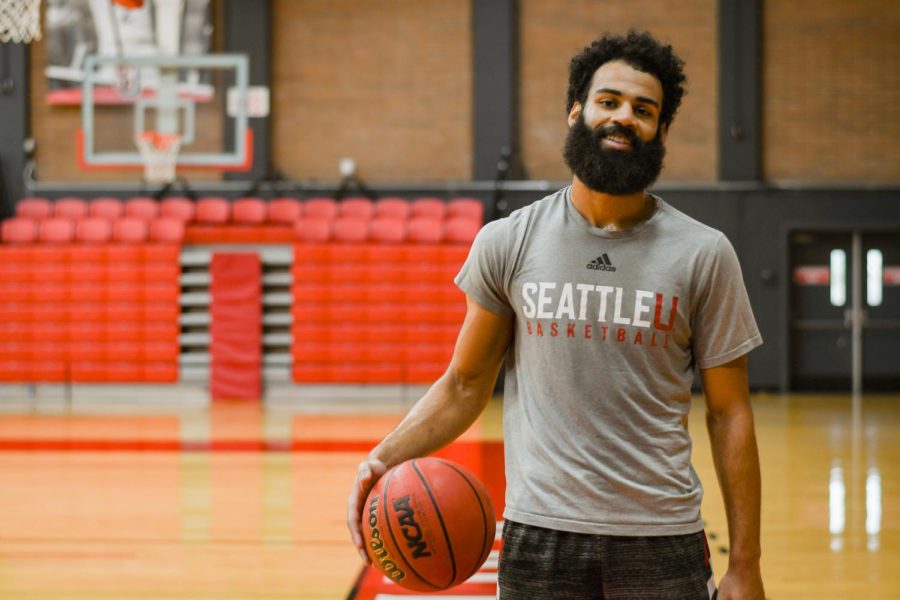 WAC Player of the Week, Cameron Tyson, after basketball practice at the Redhawk Center.

In the historic string of recent success, the Seattle University men’s basketball team currently sits as the first place and only undefeated team in the Western Athletic Conference (WAC). Their most recent victory came in a thrilling fashion Jan. 29 over Sam Houston State University. The team overcame a 19-point deficit in the first half and ended up winning by a decisive final score of 78-63.

It is no surprise that individual performances by certain Seattle U men’s basketball players have been recognized given the Redhawks’ amazing start to conference action. The Redhawks swept the WAC men’s basketball individual awards during the week of Jan. 17-23. Redshirt sophomore Cameron Tyson won Player of the Week and Vasja Pandža won Freshman of the Week.

Transferring to Seattle U this year, Tyson described the change as a ‘homecoming’. Starting his career at the University of Idaho, Tyson was a prolific scorer for the Vandals throughout his freshman season. Tyson then transferred to the University of Houston where he helped bring the Cougars to the Final Four in 2021.

“I’m from Bothell, Washington—about 20 minutes north of Seattle,” Tyson said. “I came back home because I felt like it was going to be a good fit for me and I wanted to be able to play in front of my family again.”

After transferring from a top basketball program, Tyson has brought serious skill, experience and confidence to Seattle U. He is proud of the success that the team has experienced so far.

“It’s definitely what I was expecting coming in,” Tyson said. “We have a great group of guys and everybody here just wants to win. I see that, when winning is your top priority, amazing things can be accomplished. I don’t see us stopping until we get that NCAA tournament bid that we want.”

Freshman Vasja Pandža could also not be happier about his choice to attend Seattle U. Pandža is one of several foreign players on the Redhawks roster this year.

“I was born in Slovenia, and lived in Leeds, England for a long time until my sophomore year of high school when I moved to the U.S. and went to school on the East Coast,” Pandža said. “When I was recruited by Seattle U, it always seemed like the best choice for me. I love it here so far and am very glad that I came.”

Over the games with which these awards align, the Redhawks won three away games against conference opponents: California Baptist (CBU), Abilene Christian and Tarleton State. Over this three-game span, Tyson averaged 19 points and 5 rebounds per game, while Pandža was a menace on the stat sheet, recording 12 points, 11 rebounds, 2 assists, 4 steals and 1 block over the three-game span.

In their overtime win against CBU (92-85), Tyson drained 4 of 6 three-pointers that contributed to his 16 point total. Seeing 33 minutes on the floor, Pandža also played a major role. Dominating both ends of the floor, Pandža finished the game with eight points, seven rebounds, four steals and an assist.

While Pandža saw fewer minutes in the Redhawk’s next game against Abilene Christian (72-62), his teammates filled in for him perfectly. Tyson scored 20 points, shooting 6-13 on the night along with a trio of threes and five points from free throws.

In their final game of the week against Tarleton State, Tyson once again led the team’s scoring efforts. He scored 21 points, 15 of which beyond the arc and corralled a team high eight rebounds. Despite having a tougher night shooting the basketball, Pandža still helped to contribute to the team’s success, putting up four points, three rebounds and a block.

“These individual awards, I’m really not too big on. I want to get back to the NCAA tournament with this team and help us ultimately win games when we’re there,” Tyson said. “I feel like our whole team could have gotten this award. In different games, different players show up and that just goes to show how deep of a team we are.”

Even though he is still in his freshman year of eligibility, Pandža had a similar mentality of supporting the team first.

“The award means a lot to me. But first and foremost, as long as we are winning, the separate individual awards don’t really mean as much,” Pandža said.

Breaking from the modesty, Sophomore Marketing major and avid Seattle U basketball fan Sammy Almada is ecstatic about the performances that have been put forth by Tyson and Pandža.

“Both Vas and Cam have definitely been some of my favorite players to watch this year,” Almada said. “It’s impossible not to cheer when Cam drains a three with all the confidence in the world behind him, or when Vas blocks a shot and I remember that he’s in my accounting class tomorrow.”

It is important to remember how these individual awards and team-wide accomplishments are not restricted to the team or athletics; rather, recognizable as a campus community, there is a certain amount of pride that comes from these awards. As Tyson and Pandža both echo, nothing is won alone.

“I would say we are a special group. The things we have the potential to accomplish are great,” Tyson said. “We want everyone to be a part of that, especially if you are a Seattle U student or faculty member, we want you there to support.”

The Redhawks next game will be away, Thursday, Feb. 3, against conference rivals Grand Canyon at 6 p.m. Both Tyson and Pandža will be great players to look out for, but their success and praise ultimately derive from their team and their winning mentality. This year, the Redhawks won’t be satisfied until they get their tournament bid.