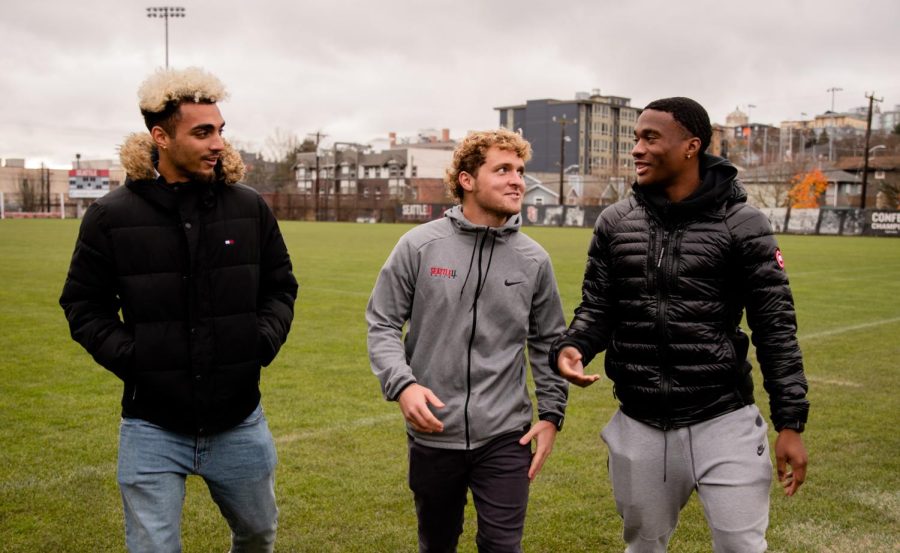 In an incredible set of games, the Seattle University men’s soccer team came from behind in both the semi-final and final of the Western Athletic Conference (WAC) Championship. The final pitted the Redhawks against the hosts, Grand Canyon University. After 90 minutes, the contest was tied 2-2 after a remarkable comeback by the Redhawks in the final minutes of regulation. Seattle U was able to win the penalty shootout 4-3. This victory follows a familiar every-other-year trend, with the Redhawks winning the WAC in 2013, 2015, 2017 and 2019.

This predictable outcome certainly doesn’t take away from the accomplishment. Head Coach Peter Fewing elaborated on the team’s success in the final WAC championship matches.

“Those were two of the most remarkable games I have ever been a part of. In the Air Force game, we were down 3-2 with less than 5 minutes to go, and I still thought we were going to win in regulation. I don’t know why, but we were all in the zone, players and coaches.”

“We were rolling at that point, but since we were at GCU, neither team had a big fan base, so we had to create that energy on our own. We were confident going into it,” Mcglynn said.

Their confidence was shown on the field, as midfielder Levonte Johnson scored a brilliant goal with four minutes left in regulation to tie the game at 3-3. Then soon after, forward James Morris found a loose ball at his feet from a long throw-in, scoring with only 15 seconds left on the game clock to secure the win for the Redhawks.

In relation to the victory, starting goalkeeper Akili Kasim commented on the end of the game.

“I think we would all have liked to have won more comfortably and not put ourselves in stressful situations, but a win is a win at the end of the day. It shows that we can push through a lot of adversity in our game,” Kasim said.

The adversity and stress was heightened for the Redhawks in the final match of the WAC tournament. They found themselves down 2-0 in the final four minutes of their game against the host team Grand Canyon.

“We were down 1-0 almost the whole game, we were attacking and trying to make it 1-1, but then with 4 minutes left, they scored again to make it 2-0. At that point, we basically had to go all out,” McGlynn said.

The Redhwaks played marvelously in the final minutes of regulation, their first goal coming from a corner kick, scored by Sam Tessler in the 87th minute, followed by a free kick goal by Noe Meza in the 89th that dipped perfectly into the goal. Coach Fewing elaborated on  this second goal by Meza.

“We all knew he was very capable of the shot because we had seen him do it before; we all felt, ‘okay, we have been here before,’” Coach Fewing said.

After the Redhawks tied it up and regulation was over, the team had a collective thought that they needed to make it through to penalty kicks while heading into overtime.

“At the end of overtime, we started kicking the ball away because we knew that in penalties, we would be all right,” Johnson said.

The same confidence was expressed by Coach Fewing who reiterated what he said during the brief intermission between the two overtime periods.

“I pointed to [goalkeeper] Akili Kasim and just said, ‘we have that guy, he will put us on his shoulders if we give him the chance.’”

Kasim was also sure of his abilities.

“Yeah, that’s what we wanted to do. We were really confident going into PK’s,” Kasim said.

Saving two of Grand Canyon’s shots and making their first four, Seattle U won the WAC in a thrilling and assertive fashion.

“I don’t think I have ever seen that in sports: two comeback wins in a semifinal and final.”

Unfortunately, after their great achievement, which got them a bid into the NCAA tournament, Seattle U lost Thursday, Nov. 18 in the first round against the University of Portland 3-2.

The competition won’t get any easier next fall. The Redhawks open their season against Notre Dame, and then head to Kentucky and Louisville—all NCAA tournament teams who the Redhawks will prepare to compete with.