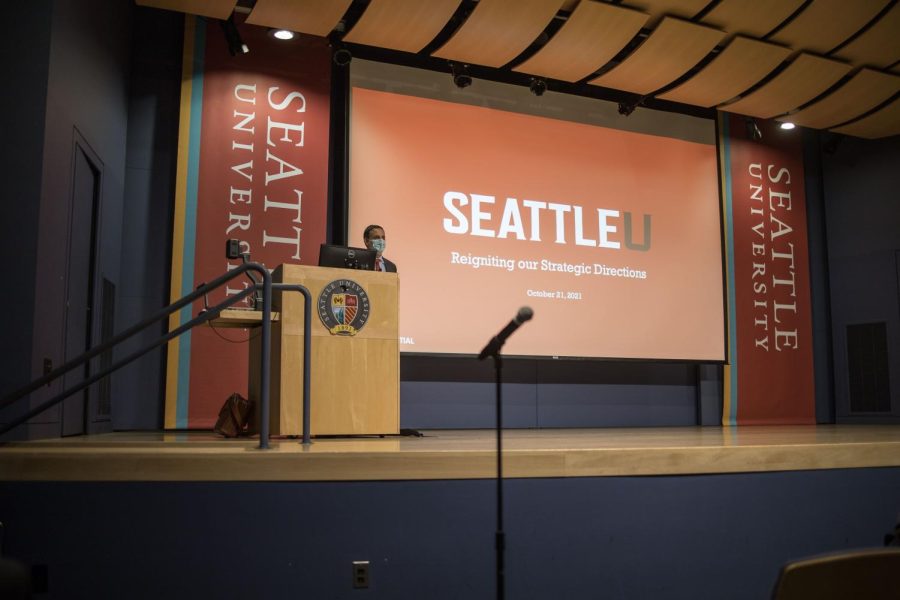 Seattle University’s emergence from the tumultuous period of quarantine has magnified many of the challenges it is facing going forward. The Strategic Directions plan, originally launched in Jan. 2020 by former Seattle U President Fr. Stephen V. Sundborg, S.J., was set to guide the university over the next few years.

With President Eduardo Peñalver starting his term at Seattle U this quarter, he looked over the plan last summer to form an updated plan titled, Reigniting Our Strategic Directions. The plan has gradually become more refined, thus making it a greater guiding document for the current state of the university, given that the COVID-19 pandemic is still impacting the U.S.

In an email to the Seattle U community, Peñalver introduced his revised plan. He also shared that there were to be open community forums throughout October to allow for campus-wide discussion.

The first of the community forums was held Oct. 21, allowing students, faculty and staff to share their thoughts on the Reigniting Strategic Directions plan. There was also a virtual forum Oct. 27. Feedback from community members who attended the Oct. 21 forum was positive.

Fr. Jerry Cobb S.J., an associate professor in the English department who helped introduce the new president to the campus last year, shared his thoughts on the Reigniting Our Strategic Directions plan after attending the open forum.

“The president really does a terrific job of listening and then responding directly to people’s questions.” Cobb said. “I think it’s a new moment in an old story, in the sense that President Peñalver has a very strong sense of what has made Seattle U a strong Catholic Jesuit university, but he also has a good sense of new opportunities and new challenges that we face.”

Robert Dullea, vice president for planning and vice provost, also attended the forum and echoed Cobb’s sentiments toward the plan.

“I thought the forum was terrific. I think President Peñalver has done a terrific job of sharpening the Strategic Directions and bringing in his own vision to what was already there in the plan,” Dullea said. “I thought the questions that came from the audience were thoughtful and well-informed, which will help continue the refinement of the plan as we get ready to launch [the final plan].”

Not only is Peñalver looking for feedback from the Seattle U community at the public forums, but he has also met with various groups and individuals on campus to hear their opinions. Discussions with the academic assembly and the deans of Seattle U’s various colleges started in July, when the document was first being developed.

After hosting the two forums, Peñalver plans to submit the Strategic Directions plan to the Board of Trustees, seeking final approval mid-November. Once it is approved, the university will move on to defining and implementing action plans for the individual goals.

Peñalver commented on how he is using the feedback he receives.

“At each stage, we have taken that feedback and used it to revise and refine the strategic directions documents. These are very much living documents. We will do the same with the feedback we receive from the public forums,” Penalver said in a written statement.

Thus far, Peñalver has emphasized the importance of five goals in the revised plan: reimagine and revise our curriculum, strengthen professional formation for all, enhance the student experience, promote inclusive excellence and reposition for growth. While some of these goals have new components, others have been expanded or revised to better suit Seattle U’s current goals.

Dullea expressed his excitement that Peñalver is focused on how the goals will be implemented, making Seattle U a more successful university in the long run. He believes the new plan will positively impact the entire Seattle U community.

“I think it’s very aligned with our mission and our values as an institution and I think it has a growth and resource development mindset that will really help us to address a lot of long standing needs on campus,” Dullea said.

“President Penalver talked about growth as an institution and he didn’t talk about it in vague general terms. He talked about the fact that we want to maintain and sustain our existing undergraduate population of students while growing where possible, but also grow in the online graduate executive education aspect of graduate programs for Seattle U,” Van Liew said.

In the wake of the community forums to discuss Reigniting Our Strategic Directions, it is evident that Peñalver’s new plan will allow for many goals to be put in place for the university, and that the Seattle U community will navigate those changes as the plan is implemented over the next five years.