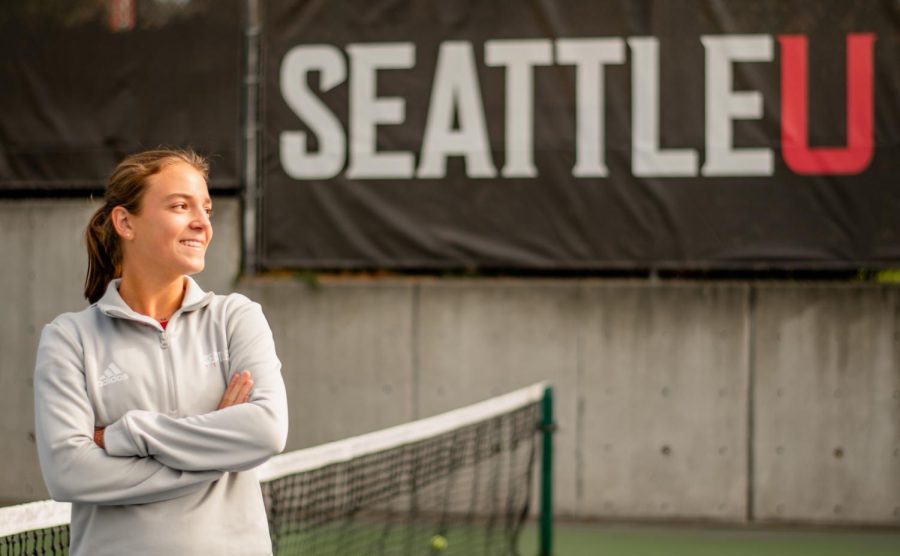 In her first tournament for Seattle University, freshman Mireia Fehr won the Washington State University Cougar Classic, a feat that would earn her the Western Athletic Conference (WAC) Player of the Month award.

Featured in the Red singles bracket, Fehr won three matches in straight sets. Her closest scoreline was a decisive 6-2, 6-2 win over Portland State’s Majo Hernandez in the championship match.

Reflecting on the tournament, Fehr gave insight into her performances.

“I didn’t focus on winning or losing; I just wanted to compete and play the best I could,” Fehr said. “The key thing for me is to really start from the first game, the first point and be aggressive.”

There’s a lot that goes into being a full-time student athlete. Fehr chose Seattle U because of the university’s small size and location within the city, a blend she feels is perfect for her. In addition to making waves on the tennis court, she is studying cell and molecular biology in the classroom.

“It’s kind of tricky to combine both things, but you get used to it,” Fehr said. “I really like it.”

The successful results came as a surprise to Fehr because she is still getting used to the college tennis atmosphere with live in-match coaching. However, it’s something Head Coach Kristina Hollander always saw in her.

“When I recruited Mireia from Switzerland, I saw a very, very hard-working, talented athlete, so I knew with her coming on board she would be successful,” Coach Hollander said. “I’m very happy she’s successful so soon, but I definitely give her credit for being very disciplined during the tournament. She just went on court and took care of business and she was just mentally and physically prepared to tackle all the matches.”

Following her performances in September, Fehr was announced to have won the WAC Player of the Month. She expressed what that moment meant to her.

“It’s a big honor, I’ve never had such a title … it’s like winning a little grand slam,” Fehr said. “It’s so special.”

Coach Hollander expressed her own reaction to the news of Fehr winning the award and suspects that there is more to come.

“I am extremely proud of her winning Player of the Month, especially among all the schools that are in the WAC, so I’m very happy for her,” Coach Hollander said. “She’s a gem, so we’re very fortunate to have her and I think she’s going to do great things throughout the season and the next four years at Seattle U.”

Fehr looks to continue her form as Seattle U Women’s Tennis prepares for the ITA Regional Championships in Palo Alto, Calif. later this month.