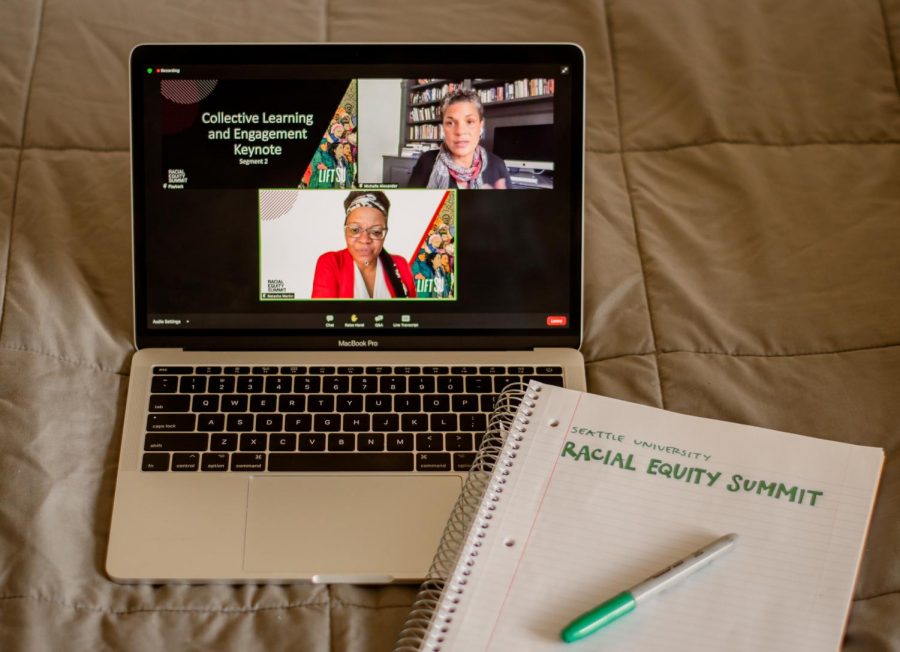 Seattle University held its first Racial Equity Summit May 19 as part of the LIFT SU action plan to promote the importance of diversity and anti-racism in higher education. Following a year spent grappling with the racial disparities revealed in the after-effects of COVID-19, and a summer spent confronting the social and racial injustices emphasized by the Black Lives Matter movement.

“The road to persistence and belonging is an intersection,” Martin said, during the Summit.

This concept was addressed through a series of panel discussions between faculty volunteers, organized by the ODI. The panels evaluated a variety of topics surrounding systemic racism, from allyship to adapting the Summit’s teaching to create large-scale change.

Associate Professor of Sociology, Rachel Luft moderated the panel discussion about being involved as an ally to people of color (POC) while embedded in an inherently racist society. Luft’s goal for the conversation was to reflect on how to act in solidarity daily and move forward effectively in one’s “racial justice journey,” despite contradictions.

“Being an ally isn’t wanting to look like you’re on the right side, it’s being committed to dismantling white supremacy,” Luft said. “That’s really challenging. That’s really about reckoning with the kinds of unearned support to well-being that many of us have grown to depend on.”

Martin conversed with keynote speaker, author Michelle Alexander, who addressed the lessons she learned during her time as both a civil rights lawyer and an author. Associate Professor of Management, Holly Slay Ferarro, presented an excerpt from Alexander’s book, “The New Jim Crow: Mass Incarceration in the Age of Colorblindness,” as part of a segment where faculty members read aloud a work that resonated with them.

Ferraro has a background in research on how marginalized people “navigate organizational spaces,” and much of her prior research intersected heavily with the topics Alexander discussed. She viewed this event as an opportunity to come together as a campus community and have a frank conversation about the global impact of racism in every facet of life.

“[It’s] a signal to folks who have stigmatized and marginalized identities and [it] says that we are trying to learn from folks who have been doing this work like Michelle Alexander…[so] we can move forward again with some renewed and shared understanding,” Ferraro said.

Washington Middle School Site Manager, LaKesha Kimbrough, joined the event as a panelist. She found herself reflecting heavily on the importance of healing and moving towards a place of “transformation and liberation,” during the panel on allyship.

Following the event, the ODI urged Seattle U faculty and students to thoroughly reflect on the discussions that took place to ensure that the lessons imparted during the Summit go beyond that space. For Kimbrough, this reflection is a time of personal growth.

“That lies with us as individuals, so what will we do, what did we take away from that summit, how did that impact us and what’s our personal call to action…I think by doing that, then we will begin to hold our communities accountable as well,” Kimbrough said.

The Summit also involved students who took it upon themselves to incite change and build up antiracist communities that advocated for justice. The Black Student Union (BSU) Vice President Tatiana Summers and President Adilia Watson, who created Seattle U’s first scholarship endowment for Black students, were honored with a LIFT SU leadership award.

Second-year Biology major Ruth Zekariase took part in the Summit through an experimental Art in Action segment wherein she created a work that represented her thoughts on the event. Zekariase was contacted by her Seattle U art professor, Jasmine Mahmoud, who also spoke about the strong relationship between art and politics in an earlier reflective segment of the Summit.

After listening to the keynote address and the desire for change through action expressed by faculty members, her sketch began to take shape. Zekariase chose to embody the variety of perspectives she witnessed with the line “lift all voices.”

The Summit served as a confrontation of the systems of oppression that limit POC and undermine them at every turn. Faculty and students collaboratively analyzed their understanding of patterns of systemic racism to diminish their impact and create an anti-racist community.