Seattleites Rally Together to Support the AAPI Community 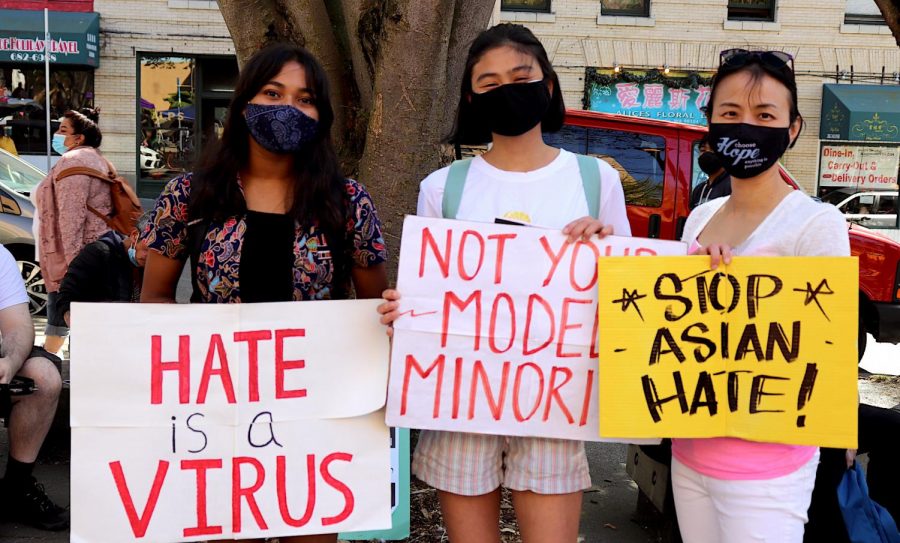 Protestors gathered at Seattle’s International District for the Not Your Model Minority March in support of the Asian American Pacific Islander (AAPI) community. As the number of Asian American hate crimes continues to skyrocket, AAPI organizations are motivated now more than ever to assemble to bring awareness to the struggles facing AAPI communities.

The demonstration began at Hing Hay Park April 17, where several local AAPI organizations and activists spoke on issues facing AAPI sex workers, elders and immigrants. Protestors then took to the streets and marched east up King Street through the International District then looped back around to Hing Hay Park via Yesler Terrace.

Fran Juico, an organizer at Anakbayan UW, a Filipino youth and student organization, reflected on the recent uptick in hate crimes against Asians.

“The sad thing is that this is nothing new, so I’m not surprised. Women and working-class people, especially, have always been the most susceptible to attacks. I think right now a lot of people are agitated and they are taking to the streets to let all of that out,” Juico said.

CJ Molo, a fourth-year sociology major at Seattle University, identifies as a displaced Filipino removed from their land. They discussed how recent hate crimes against AAPI have affected their feelings of safety, especially in the workplace.

“I work at Coffeeholic, which is a Vietnamese inspired coffee shop, so there is fear that it could happen at any moment since we are marketed as an Asian coffee shop,” Molo said. “However, it’s just not about hate towards Asian people, but more about the social constructs that makes people think they even have the right to commit hate crimes in the first place, which is something that needs to be talked about more.”

Although Juico was happy to see people coming together in the community to support AAPI, they also voiced their concerns about getting to the root of anti-Asian sentiment in the U.S.

“The problem is that many people do not realize the root of Asian hate. It all comes down to U.S. imperialism. That’s the real issue at hand. At Anakbayan, our goal is to organize for national democracy in the Philippines,” Juico said.

Molo also expressed their dismay at how AAPI issues and activism are often misunderstood.

“It’s nice to see people gathering together in support of the AAPI community, but sometimes the analysis can be off. Solutions tend to be more focused on assimilation and representation, and I think representation is a part of this, but it’s not going to be the thing that solves our problems,” Molo said.

As Asian and Pacific Islander struggles slowly come to light, people may be wondering about ways to stand in solidarity with the AAPI community. Melo Ibanez, a Filipino-American artist and organizer at Anakbayan UW and International League of Peoples’ Struggle, discussed the importance of recognizing and overcoming prejudices.

“Society ingrains certain prejudices and stereotypes in us from the moment we are born. The important thing is to recognize those prejudices that we have and learn to overcome them through educating ourselves on the history of Asians in America. People can also try to get involved with grass-roots movements,” Ibanez said.

Juico also touched on the importance of solidarity between different BIPOC communities, especially the Black community.

“We just want freedom for exploited and colonized people. It is important to organize alongside each other, because many of the struggles facing Black and Asian communities are all rooted in the same white supremacy ideals,” Juico said.

Molo discussed their hopes for those wanting to stand in solidarity with the AAPI community.

“I want you to fight this fight with me. I want you to be my comrade and see this struggle as your struggle as well. It’s not just my struggle that you stand off to the side to watch me fight and cheer me on,” Molo said.

Juico elaborated on the power of standing in solidarity with the AAPI community.

“Standing in solidarity with one another is the most dangerous thing we can do in offense to U.S. imperialism, because the people who are exploiting us will have to face all of us and they’ll be faced with the fact they have to give up power, which means relinquishing white supremacy,” Juico added.

Although recent protests are beginning to draw more attention to AAPI struggles, there is still a long way to go before AAPI and other BIPOC communities can eradicate systemic racism.