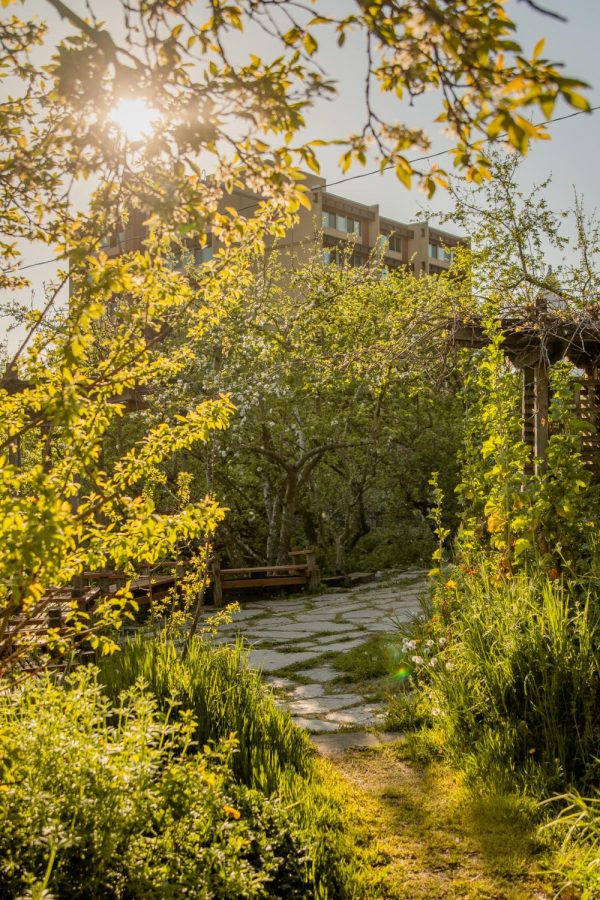 A path of sunlight at The Danny Woo Garden.

Spring invites everyone outside, especially after the cold and long year before. Luckily, there are 489 public parks in Seattle to enjoy in these warmer months. Some are small hidden gems, tucked away from the more well-known parks of the city. To help locate these gems, there is a searchable list on the city’s park website.

Monique Lebaron, a second-year biology major, frequently visits parks to study, be with friends and soak up the sun. She often goes to Seward Park, a 300-acre park only a 16-minute drive away from the Seattle University campus.

Getting to the park by bus requires riding bus seven from the S Jackson St. & 12th Ave. S stop, getting off at Rainier Ave. S & S Genesee St. and then riding bus 50, which stops close to the front of the park. It takes about an hour when riding from campus. Seward park has a swimming beach, amphitheater and bike trail. It is also home to the Audubon Center which is currently closed, but it would usually host community programs and events.

Students looking for a smaller park and shorter commute can go to the Spring Street Mini Park on Spring St. and 15th Ave. It is a nine minute walk from campus and has a small playground, picnic tables and a green lawn area.

Studying is a popular activity among students who go to parks, especially during a year of online classes. Lebaron shared the reasons she likes to study outside and how she works around not having internet.

“I have to be studying most of my day anyways, so I’d rather be outside. A lot of things are online, so you can’t really do that in places where you don’t have wifi,” Lebaron said. “When I’m able to print it out, readings or books, I always try to. If there’s anything I could do outside I’d rather do it outside because it feels nicer, and you don’t feel as cramped in your house.”

Anna Penticuff, a first-year biology major, also does her reading homework outside. She uses a hammock by the trees at the Seattle U Quad.

“They’re [the trees] a really good distance away from each other for hammocks, and you get wifi there too. I usually can’t do my science classes in my hammock, but if I have a reading assignment that’s really good. People will also pop up if they know me, so that’s really fun,” Penticuff said.

Shannon Britton, the Grounds and Landscaping manager at Seattle U, explained some of the work that goes into maintaining the outdoor spaces on campus, like the quad. The lead staff members meet daily to plan the routine for the day.

“One day a week they spend mowing lawns, or they may have a maintenance project that they’re working on. Right now they’re on the west side of the administrative building doing some renovation in the landscape spaces back there; removing invasive weeds, putting down mulch and they put up some new fencing around a tree,” Britton said.

For studying on campus, Britton recommends the Campion Hall Japanese Tea Garden, the Quad and the Union Green. Britton says that for now, the Union Green will remain closed because equipment is moving in and out of the area.

Outside of campus, Britton recommends the Danny Woo Garden. It is 1.5 acres, and the gardens provide a space for elder gardeners in the community to use. They also have a garden for children, a chicken coop and an outdoor kitchen.

The Kobe terrace is near the Danny Woo Garden. It has cherry trees, a short walking path and a view of Mount Rainier on clear days. A 200-year-old stone lantern sits at the top of the hill, commemorating the park’s completion.

Seattle has many green spaces, and they are a great way to escape the heat of dorm rooms. The weather will only continue to get warmer as summer approaches, and with it comes opportunities to find a new favorite spot.