Mariners Walk Away with a Win on Opening Day 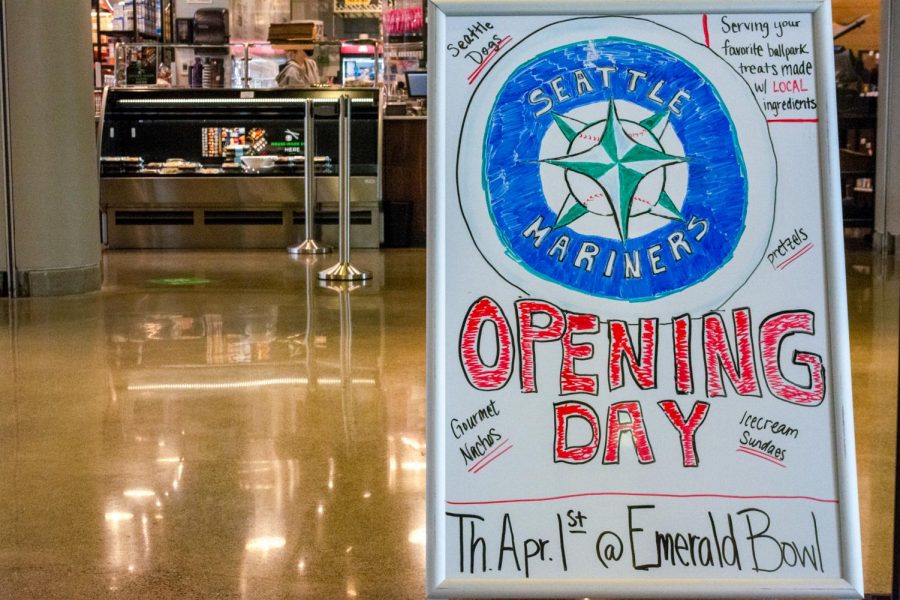 Opening day at T-Mobile Park looked, smelled and sounded familiar but was still a different atmosphere due to COVID-19 regulations. There was no bumping bustle of crowds as you went to your seats. The slight smell of bleach dulled the scent of hot dogs. The crowd hummed instead of hollered. Yet, you could sense the return of something missed.

The exuberance of opening day was muted until the Mariners edged past the San Francisco Giants in the eighth inning, winning with a walk-off walk in the 10th inning. Gone were the fake crowd noise and the cardboard fan cut-outs, instead 8,174 fans dotted the seats for the three-game opening series against the Giants April 1.

Jen Meuller, a sports broadcaster for ROOT sports, expected opening day would be special however with noticeable changes due to COVID-19 protocols and restrictions.

“I think everybody in the last year recognizes that we miss not having sports. We miss not cheering together as fans. And we miss not being around each other watching our favorite teams and our favorite sport,” Meuller.

Long-time Mariners season ticket holder, Jane Nelson was trying to get back into the swing of baseball.

“I’m excited, but I used to always know who was playing, I knew the players, I followed baseball, and somehow I lost that last year. So, I have to get back into it,” Nelson said.

However, having fans cheering in a major league stadium will be new to many of the Mariners, including Kyle Lewis, center fielder, who was named rookie of the year in the shortened 2020 season. Meuller pointed out that the Mariners spring training in Arizona had fans and they practiced with sound noise.

“Fans help you get to the right energy level in a game,” Meuller said.

Matt Mikolas, co-host of Puck and Slick on 950 KJR radio and co-host of the podcast Positive Spin Rate, emphasized that this is an exciting time to be a Mariners fan.

“They seem to have an actual plan now. They have stocked their system full of young good exciting players. I’m thrilled to see what those guys do as they start to come up. It is going to be cool to see this franchise rise from the ashes if these players mature and come to fruition,” Mikolas said.

Mikolas noted that the Mariners made a great trade with the Padres at the trade deadline. The Mariners received designated hitter Ty France, Taylor Trammell—a top 100 prospect, currently playing center while Lewis recovers from a bone bruise,— closer Andrés Muñoz and backup Luis Torrens. In exchange for starting catcher Austin Nola, relief pitchers Dan Altavilla and Austin Adams. Both France and Trammell are on the active roster and so far are significant contributors to the Mariners.

The Mariners first hit came in the fourth inning when Seager doubled. Gausman pitched 6 2/3 innings allowing only two hits. The Mariners finally got to the Giants bullpen in the seventh inning, when Moore hit a sacrifice fly, scoring first baseman Evan White making it 5-1. Blowing by the Giants in the eighth inning, France singled allowing shortstop, J.P. Crawford to score, making it 6-2. Trammell made his MLB debut and had a great eight-pitch at-bat, which ended up in a walk and his first RBI to make it 6-3. Then Moore hit a bases-loaded double that scored Seager, closing the deficit to 6-5.

With runners on first and third and one out, utility player José Marmolejos, pinch-hitting for starting catcher Tom Murphy, reached on a fielder’s choice. Giants first baseman, Brandon Belt, made a throwing error to second on the ground ball, allowing Moore and Trammell to score. This lead was short-lived. The Giants had a solo homer to tie the game at 7-7. The Mariners displayed their grit in the tenth inning with a walk-off walk from left fielder Jake Fraley, winning 8-7.

In the second game of the series, the Mariners lost 6-3. The Mariners got to the Giants starting pitcher, Johnny Cueto, in the early innings. The Mariners got on the scoreboard early with a double from Torrens, which scored Fraley for a 1-0 lead. In the top of the third inning Giants starting catcher, Buster Posey, homered to tie the game at 1-1. White had a single in the bottom of the inning, scoring France and Haniger to take a 3-1 lead. Mariners starting pitcher Kikuchi masterfully controlled the strike zone. Topping out at 97 mph is something the Mariners did not see from him last year. He also tied his career-high with 10 strikeouts and allowed three runs in six innings.

The series’s final game began as a pitcher’s duel until France hit a home run in the bottom of the third inning to take a 1-0 lead. Starting Mariners pitcher Chris Flexen looked great through 5 innings allowing six hits and no runs. This was his first major league start since 2017, having spent the last few years pitching in the Korean League. In the bottom of the fourth inning, Trammell doubled for his first big league hit and White scored to make it a 2-0 lead. Moore had a double to score Trammell for a 3-0 lead. Three innings later, Haniger hit his first home run since 2019, making it a 4-0 win.

Mueller weighed in on what she thought of the Mariners prospects this year.

“I think what we are going to see is a lot of young players really find their footing in the big leagues this season. I think that there is going to be a lot of growth,” Mueller said.

Mariners are ranked 3rd for prospects in the farm system. Both Mueller and Mikolas are excited at the pipeline of talent and predict that fans will see outfielder Jarred Kelenic come up from the minors early to mid-season. Julio Rodríguez will not likely come up this year. Mikolas stressed the outstanding pitchers Seattle drafted that will be coming up: Logan Gilbert, George Kirby and Emerson Hancock. The future looks bright.

The Mariners lead the MLB with the longest playoff drought at 20 years. The prospects are good for a return to the playoffs, maybe not this year, but fans can be hopeful that the drought will end soon.