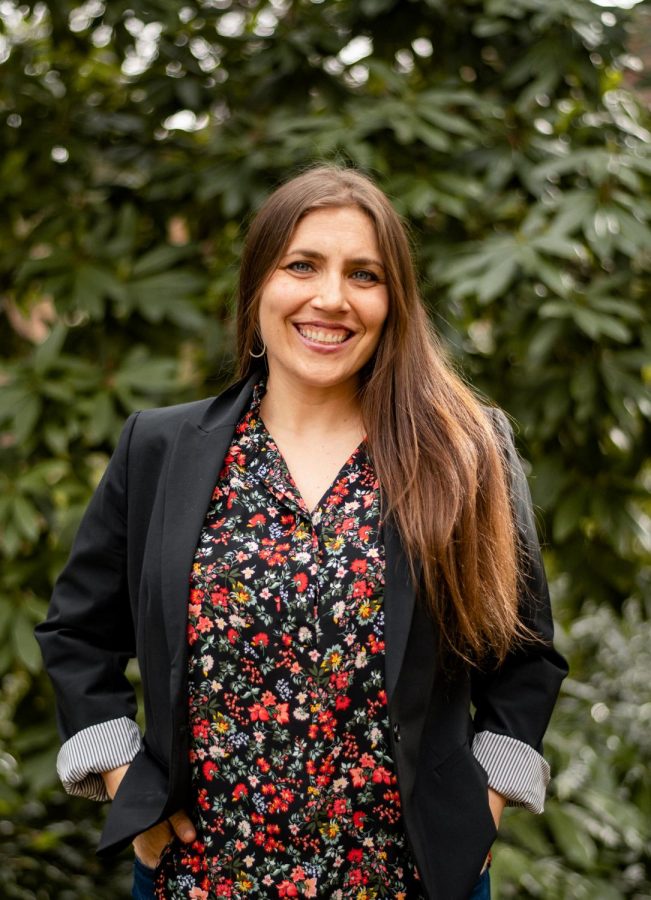 Since earning her doctorate in Communication and Media Studies, Caitlin Carlson has devoted her professional career to the nuanced and controversial topic of hate speech and its manifestations in digital, political and social realms. A culmination of the Seattle University Communication professor’s work will be available to the public April 6 when her new book, “Hate Speech,” is released in collaboration with the MIT Press Essential Knowledge Series. In an interview with The Spectator, Carlson discussed her new book.

CN: How did you become passionate about researching hate speech?

CC: I am from Maryland, originally, and I went to undergraduate school at Clemson in South Carolina, which was really my first experience with racism. Seeing the way people of color were talked about and the inequity that exists was the first thing that sparked my interest.

CN: What inspired you to write “Hate Speech?”

CC: My dissertation is about hate speech on social media, so when I was approached by the MIT Press––for their Essential Knowledge Series, which covers a broad range of topics––they were looking for someone to write about hate speech. I think right now especially, it’s really important to give people the information they need to form their own opinion.

The U.S. is definitely the outlier when it comes to how we treat hate speech. In many other western democracies, it’s prohibited and regulated, but here it’s protected by the First Amendment. Given the amount of hateful rhetoric in our public discourse, people need to have the facts about what [hate speech] is, its impact, how it’s regulated in other places, and the difference between in-person and online.

[Hate Speech] is not written like an academic book, it’s written from the perspective of myself sitting down at a bar or coffee shop to tell you about these things, and what would you need to know to form your own opinion.

CN: How would you define hate speech?

CC: I would define hate speech as expression––not just words––that maligns or attacks people based on their fixed identity characteristics. That can include everything from race, ethnicity, religion, gender or gender identity, sexual orientation, age, national origin, disability or ability status. It doesn’t include hate directed at someone because of their political party––it’s things about myself that I cannot change.

CN: Through your years of research, what is the most shocking piece of information you’ve learned regarding the topic?

CC: I am absolutely shocked by the amount of people, particularly scholars, who do not recognize the impact of this language…I have an article out right now that talks about hate speech as a structural phenomenon and as a tool that’s used by people in power to maintain systems of inequality.

We see historical examples in the U.S. like the treatment of Native Americans or African Americans, where this language is used to keep people down. Othering is part of what makes things like discrimination or violence against groups of people more palatable. So the shocking thing for me is when people are unwilling to recognize the real impact that this kind of phenomenon has.

CN: During a year as transformative as 2020 about increased awareness of systemic racism and microaggressions, do you believe educating others on hate speech is especially important in our current political and social climate?

The Rohingya in Myanmar were targeted by ethnic cleansing campaigns by the military in Myanmar on Facebook. In order to make violence against people more palatable, we often use language to dehumanize them. It’s a really important time, given the tone of the rhetoric in the U.S. and the difference between the U.S. and other countries’ approaches for people to have facts to form their own opinions.

CN: In your published work, “Report and Repeat: Investigating Facebook’s Hate Speech Removal Process,” you discuss hate speech, monitorization and its applications in the digital realm. Did this research help inform your book?

CC: I’ve been researching hate speech on social media since 2013, so seeing how it has evolved and changed over time has been really helpful…Having a working knowledge of different social media platforms really helped make the book not just about one single platform, but thinking about content moderation as it applies to all kinds of social media. And not just from the legal perspective, but I’m also really interested in the ethical elements of content moderation.

CN: How has viewing issues through a feminist lens affected your work, and why do you think sexism gets overlooked on social media?

CC: Right now, a lot of hate speech against women, in particular women of color, goes overlooked partially because of who’s in the room…I think hate speech and sexual harassment dovetail with one another, and a lot of online harassment, or what other scholars have called “cyber gender harassment,” is really specifically targeted at women.

There is a real relationship between misogyny in terms of policing women’s behavior and social media creating a platform to do that. So, if we consider misogyny as exactly that—the policing of women’s behavior—then social media creates an interesting opportunity for men to be in a position to comment on a woman’s appearance, actions, opinions, etc.

CN: Do you feel that being a college professor provides unique insight into the facets of social media and its effect on young minds?

CC: I feel like students are exposed to this kind of rhetoric all the time online or playing video games––so really seeing how continued exposure can affect people. I am also thinking about this impact on not just college students, but on people even younger.

In the book, I talk about new research coming out about the physiological impacts of hate speech on young people. I just feel very lucky to be working with students so I get to see the real-time impact and influence hate speech on social media can have on young individuals as well as society at large.

CN: How do you think reading this book and becoming educated on topics such as hate speech could help the Seattle U community and beyond?

CC: My hope is that reading this book will help people understand that hate speech is more than just bad words, it’s part of a structural phenomenon of inequity. It’s a tool used by people in power to maintain that power. I know that students at Seattle U are interested in dismantling structures of power, and I think understanding how language works in that process will make them better at doing that.