The Preservation of Social Justice Murals 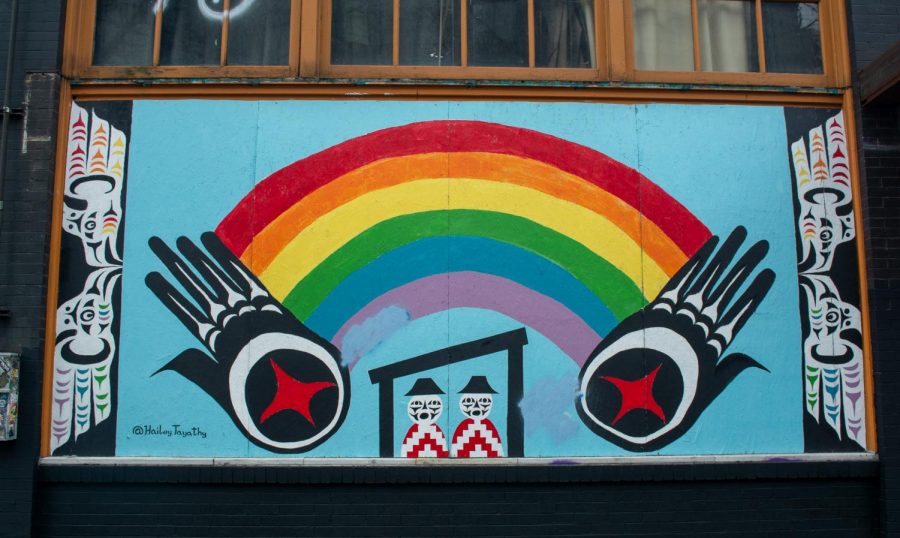 Mural painted by local artist Hailey Tayathy on plywood covering the windows outside of the Northwest Film Forum.

During COVID-19 and the increased prominence of social movements, including Black Lives Matter (BLM), artists turned to the plywood window coverings of businesses for a canvas. These new murals created by local artists have been a part of Seattle’s scenery for months, but as of recently, they have slowly been coming off the windows.

Different organizations have a variety of ideas about what to do with the murals. Crosscut reported that Seattle’s Museum of History & Industry (MOHAI), Museum of Pop Culture (MOPOP) and the Washington State Historical Society are all looking to get a hold of some of the plywood murals. Some businesses have been bringing the art indoors or giving it back to artists. The murals take up a lot of space, so storage is a problem.

The city of Seattle reported in July that the Seattle Office of Arts & Culture (ARTS) and the Seattle Department of Transportation (SDOT) would help CHOP artists preserve their art by removing, storing, documenting and making it public.

In September, the Seattle city government reported that there have been efforts from the city to preserve the BLM street mural a couple of blocks away from the Seattle University Campus, adjacent to Cal Anderson Park. Vivid Matter Collective, a group of 16 artists that created the mural, worked with the city to create a preservation plan after the original mural was damaged because of sealant applied without consultation with the artists.

Artists of smaller-scale pieces do not have as much clarity. Hailey Tayathy, a local artist and drag performer, created the mural located at the Northwest Film Forum. The artist says they do not know what will happen to their mural.

“It would be cool if it could be preserved somehow, but it wasn’t preserved all the way around, it’s just primed on the outside, so I have a feeling weather will eventually take its toll on the plywood,” Tayathy said.

The murals contain symbols representing the LGBTQ+ and indigenous communities, both of which Tayathy is part of. Depicting two hands with a raised gesture as a symbol of honor, a rainbow for the LGBTQ+ community, eagles on the sides as a symbol of power and protection and a gender-neutral couple inside a longhouse.

“I know within my experience having to hold those two identities as separate, and wanting to create a space where they are merged together,” Tayathy said. “The gayborhood of Seattle is also indigenous land and has this indigenous presence within it.”

Tayathy also spoke of the sudden need to switch to virtual platforms for their performance art due to COVID-19, and how there was a bit of a learning curve to the transition when the pandemic began.

The sudden switch in March 2020 was a big change for many artists. The missing venues left a social gap in the art community. Naomi Kasumi, a professor for art and art history at Seattle U, explained that the missing venues eliminated places to discuss art.

Financially, the pandemic has affected artists as some are left without a venue for their work. Tayathy’s mural included payment, however the same cannot be said about other local artists.

“I know a lot of people did it for essentially Venmo tips,” Tayathy said.

Kent Koth, the executive director for The Center for Community Engagement (CCE) at Seattle U, echoed the financial concern.

Koth also provided resources at the Center for Community Engagement, with hopes to provide students connections with local organizations, including an online platform that allows students to search for volunteer opportunities, Give Pulse.

The Hedreen gallery provides students with a way to connect with art. They are closed to the public, but they have been holding online events. One of their online exhibitions, “Distance Dialogues,” held a conversation with a local muralist, Bailee Hiat. They also held an online exhibition titled Abstractions of Black Citizenship: African American Art From Saint Louis.

Mahmoud, the curator of Abstractions of Black Citizenship, talked about how she hopes students will respond to the increased visibility for social movements. Mahmoud thinks that change could happen both quickly and over a long period of time with student’s help. She used the BLM movement as an example, saying it was created in the early 2010s and no one thought much of it initially, but it is gaining a lot more traction now.

“I really want students to hold that tension between the immediate work, but also the long-term work, that needs to happen for political change,” Mahmoud said.

The murals have created public art galleries for everyone to enjoy, and while the themes of the art will continue to be important, the art is not permanent. Despite its impermanence, there is a need for the preservation of the art and the social movements they represent. After a year of numerous historical events in the Seattle area and nationally, the art that has come from this time will be remembered long after it has been taken down.