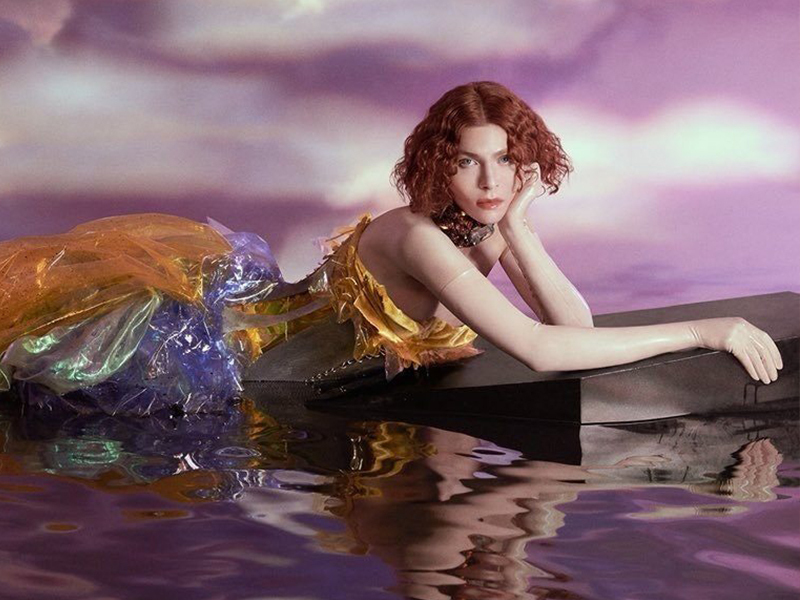 The hyperpop community felt the weight of late avant-garde pop artist SOPHIE’s death Jan 31. The star passed suddenly on Sunday morning in Athens, Greece after falling from a building while trying to get a better view of Saturday’s full moon. Despite the Scottish-born artist’s premature passing at age 34, SOPHIE’s music will live on through the sounds they single-handedly embedded in modern pop music. In an Instagram post commemorating SOPHIE’s life, fellow futuristic pop star Grimes stated that SOPHIE will remain “immortal through art”.

SOPHIE’s camp beats fuse the dark, hypnotic basslines of the underground club scene with the light, airy sounds of hyperpop, establishing a truly unique sound not only recognizable in SOPHIE’s work, but identifiable in the works of Kim Petras, Vince Staples, and Madonna.

The futurism of contemporary pop sounds, made popular by artists such as Charli XCX and 100 Gecs, can be attributed to the late star, who spent their life paving the way for these elevated sounds. In a 2017 interview with Teen Vogue, SOPHIE discussed the inspiration behind their work.

“A lot of the stuff I’ve done takes the attitude of disco but tries to bring the sound world forward,” SOPHIE explained. “We’re in a different world now. I’m trying to imagine what music that’s positive, liberating, weird, dark and real could be in the current day.”

Preston Lomond, a second-year psychology student at Seattle University and SOPHIE fan, commented on the appeal of one of his favorite artist’s music.

“I saw this really good tweet about how everyone says they’re ‘the future of music’, because all of their sounds are very futuristic and production heavy, distorted stuff. The tweet said, ‘not to be melodramatic but she created a future when a future felt fake,’” Lomond said. “That really resonated with me because when I first heard it, I was like ‘oh my god, this is the music of the future!’ because it was so out of this world…SOPHIE was my gateway into experimental pop music.”

SOPHIE’s impact on the music industry is impossible to ignore. Their production can be heard on Vince Staples’ “Yeah Right” and “SAMO,” “Vroom Vroom” by Charli XCX, “B**** I’m Madonna” by Madonna and numerous other songs. Along with collaborative works, the late artist released their own album, “Oil of Every Pearl’s Uninsides” in 2017, earning them a Grammy nomination for best dance/electronic album. SOPHIE’s work shed light on the benefits of experimentation.

Chambit Miller, a first-year student at Columbia University, commented on SOPHIE’s impact on her personal music taste after a friend introduced her to the artist.

“I kept listening to more of SOPHIE, and then by listening to them, I got into more experimental artists like Shygirl and Arca, so that was like my gateway to that genre,” Miller said.

Despite their tremendous presence in pop music, SOPHIE’s work often went unrecognized by the media. Oliver Anderson-Sanford, a student at Seattle Central College and a fan of SOPHIE’s, commented on their low profile in the music community despite their impactful work.

“I don’t know if they ever wanted this, but they never really got credit in a lot of situations or recognition for their work on the scale of other producers like Zedd, even though one could say Zedd influenced music in 2013, but SOPHIE will influence music from 2040 on,” Anderson-Sanford said.

SOPHIE altered the landscape of pop music not only through their unique production, but also in the elevation of queer artists and their influence in the music industry. Lomond stated that SOPHIE’s collaborations with artists like Quay Dash, a Black trans woman, helped give queer artists a voice in the industry.

SOPHIE, a transgender artist, also incorporated aspects of their identity in the music they produced, giving a voice to a population that is often underrepresented in music. Lomond commented on the content of SOPHIE’s work.

“When you’re a trans person, you’re bringing that to the table in everything you do, same with any kind of identity that you have,” Lomond said. “A lot of their songs were about their transness, like “Face Shopping”, and “Immaterial,” which talked about existentialism and bodies…all the lyrics are like ‘I can be anything I want’—I guess the song is about not feeling trapped in your physical form, and I think that really resonates with a lot of trans people.”

SOPHIE’s gender identity also lent itself to criticism. Miller recalled a time SOPHIE performed at their school and received backlash.

“My school, Columbia, has a music festival every year. A couple years ago they had SOPHIE come,” Miller said. “She got backlash and there were alot of transphobes who came at them for being casted for a music festival. I thought that was interesting because with the amount of stuff they did. They should have gotten so much more recognition, so I feel like there’s a trans identity issue there in the industry.”

Despite facing constant criticism, the artist continued to make monumental strides in the music industry. In a final remark, Lomond emphasized SOPHIE’s impactful presence, which transcends our time.

“The world is not and will never be ready for SOPHIE,” Lomond said. “Their music is not for 2021 or any year before, that’s what was so cool about them. They has hundreds of songs ready to go and I’m sure they didn’t release them because she could release them in 2030, but now they’re gone…I think they were so influential, and it’s a huge loss.”