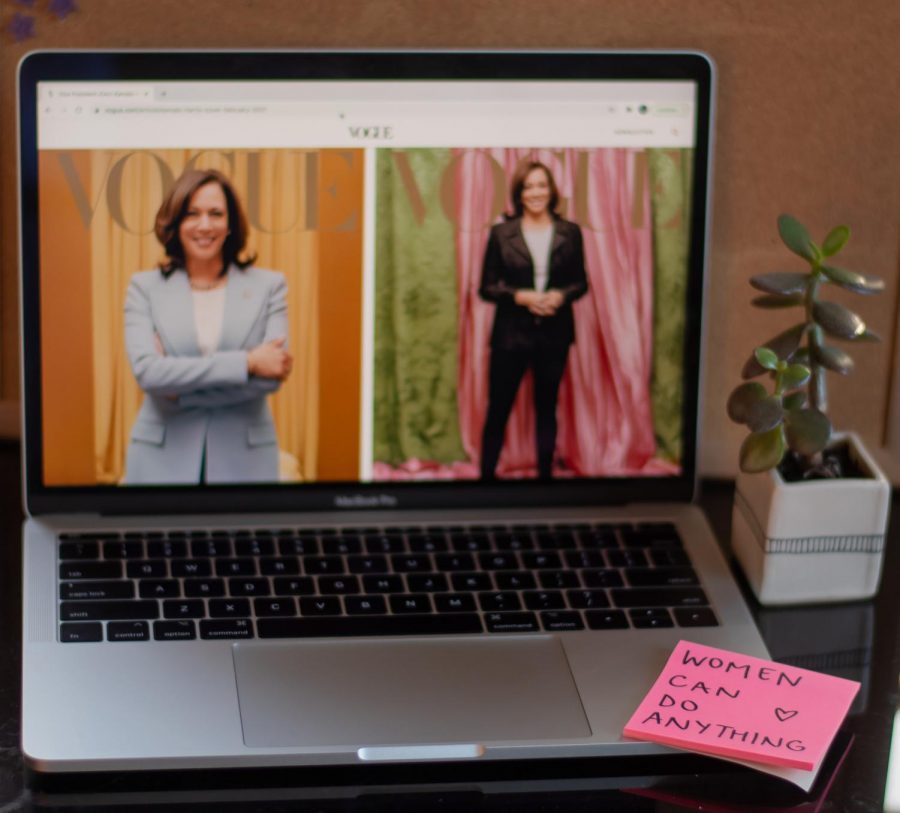 It is no secret that the press surrounding the inauguration is in full force, as Donald Trump has finally left the White House and the nation welcomes the leadership of Joe Biden and Kamala Harris. After four tumultuous and horrible years, the face of new leadership deserves a moment of celebration. The Vogue team had the opportunity to commemorate this moment on their February 2021 cover, but fell flat in their efforts.

With this being a particularly historic administration, the press has recently highlighted the diversity of Biden’s cabinet choices—an element of government that has long been neglected. Rarely can folks see themselves in the faces of their leaders, so this necessary change is an accomplishment for the Biden team.

Kamala Harris was heavily interviewed and featured in various publications leading up to the inauguration. But most notably in the world of high fashion, Harris was featured on the cover of Vogue’s February 2021 issue. The image, when leaked, was quickly touted as unprofessional and inappropriate at such a pivotal time in America’s political arena, and the general consensus seemed to be one of critique as most were left unsatisfied and underwhelmed.

The green and pink backdrop in the photo, according to Vogue, was supposed to be an ode to her sorority days as a member of Alpha Kappa Alpha, but to me looks like heavy wrinkled fabric someone might use as a YouTube backdrop for a low production video. The styling was dull, even if it was a reference to her renowned converse-chic style. A prevailing critique was that Harris appeared to be washed out, reminding me of the similar backlash Vogue received when covering Simone Biles.

This repeating problem is not one to be overlooked as editorial photography has long left out Black women. A critique that comes into play against high fashion magazines is their portrayal of Black women in the past. In previous instances, when being chosen to adorn the covers of magazines, Black women are often not photographed, styled or lit in the most flattering way.

In June, during the height of Black Lives Matter protests, industries  recognized these oversights, and photographers, editors etc., were called on to do justice to the likeness of Black women the same way they would their white counterparts; something I think was yet again overlooked in Harris’ cover image.

Kamala Harris’ recent press run has garnered her other fashion magazine covers too, including Elle, which she even dedicated a post to on her main Instagram feed. This exposure is almost guaranteed for a popular magazine when photographing someone, as most are proud of their covers and want them to be seen. It’s almost an invisible contract that the publications bank on—that the star of the cover will share it. Harris has clearly chosen not to address her Vogue cover, as she has not reposted the graphic anywhere.

The implication of her silence alone is enough to convey the general feeling of disappointment. When someone is featured on the cover of Vogue, it is almost always guaranteed they will act as press for the issue, which is  a missing element here. I’m sure her press team is telling her to steer clear of the blow back it might receive, but no acknowledgment feels pretty obscure.

There are two covers to discuss here. One, I found alarmingly boring for such an important time in American politics, and one that has been far less circulated, yet seems to be executed much better. The online issue cover is far more flattering and appropriate for this historic moment. Against a gold background in a light blue suit, Harris looks the part of Vice President. Now I know this was not her doing. She does not have a say in these covers because it is not her job, and it should not have to be. The people entrusted in portraying our elected officials, especially the first female Vice President, a powerful Black woman, should respect that their job is important in the eyes of the public. Their images and choice should reflect that.

It is no question that the history of politics in this country is inextricably tied to fashion and the press surrounding it. Just think of Jackie Kennedy and the many images, outfits and pillbox hats that defined her as a public political icon. To have the first female vice president be photographed in such a casual manner seems too subpar a celebration for such an incredible accomplishment. Relatability just does not seem like the issue here to me.

Politicians do not rely on a pair of converse to seem like the girl-next-door, and that just seems like an oversight from the team at Vogue. The respect Harris should be guaranteed as a woman, a person of color and the first female Vice President outshines the mediocre image the Vogue team went with.