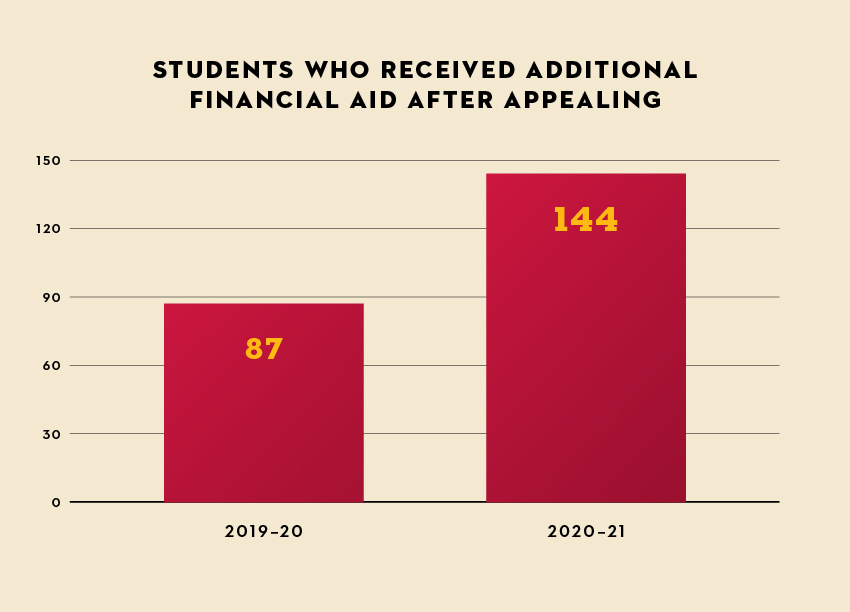 Upon the first months of COVID-19 hitting the United States, it became clear that many students were facing dire financial consequences from the lockdown. Seattle University distributed money from the CARES Act Emergency Financial Aid Grants to 1,624 eligible students. An additional 493 students received money from Seattle U’s Emergency Fund. So far this year, 144 students received additional aid from Seattle U after filing financial appeals. By comparison, data compiled for the 2019-2020 academic school year from Student Financial Services reveals that only 87 students filed a financial appeal and received any form of additional aid.

Joseph Phillips, Dean of the Albers School of Business and Economics, attributes the increased need for financial aid to the turbulence and job loss students face amid the ongoing pandemic.

“Sometimes they’re losing jobs, sometimes they have multiple jobs, and they lose one…there’s just a variety of circumstances out there,” Phillips said. “The bottom line is, there was a lot of turbulence and people thought they had things figured out, and then that kind of fell apart and they had to scramble.”

Phillips has been working with Albers staff to ensure that despite the increased strain of online learning and working during a pandemic, Albers has all the resources necessary for students who may be facing any financial difficulties. He recommends that students take a proactive approach by speaking with staff in order to identify the most effective ways to alleviate their financial worries.

“I think the key is to, whether you’re comfortable doing it or not, just force yourself to reach out to somebody and let them know you love being at Seattle University but, financially, it’s a challenge,” Phillips said. “If you don’t, then you’re leaving it to chance—you’re not necessarily taking advantage of everything that might be there for you.”

According to a report by Seattle U, the school received $1.8 million in federal funds from the CARES Act, which was distributed to help students with unmet financial needs. For Melore Nielson, Dean of Admissions, this was the opportunity the school needed to distribute money to students who were suffering financially due to the state of the economy during the pandemic.

“The goal was to help as many students as we could knowing that, while certainly we couldn’t possibly address the entirety of the impact, still trying to make sure that we’re awarding as much as we could to help the most students possible,” Nielson said.

Though the school estimated that 7,107 students were eligible to receive Coronavirus Aid, Relief, and Economic Security Act (CARES) Act funding, the U.S. Department of Education rejected the analysis, as the department revealed stipulations that students must also be eligible for regular student aid in order to receive a CARES Grant.

According to Assistant Vice President of Student Financial Services, Jeff Scofield, this was when Seattle U began looking into alternatives in order to help students with unmet financial needs, “many of whom didn’t fit the federal definition of the CARES Act requirements.”

The school continued to encourage students to submit an application explaining any financial burden they may have been experiencing as a result of the pandemic. Student Financial Services also relied on a staff-based referral process, wherein staff members could forward information explaining a student’s struggles and place them in the applicant pool for financial assistance.

“We tried to remove any barriers,” Scofield said. “We just wanted to get the students and the story and see where we could go.”

In order to support students and keep up with unmet financial needs, Seattle U also doubled down on its fundraising efforts within the community. Earlier this year, Seattle U President Fr. Stephen Sundborg, S.J. worked with donors to fundraise over $600,000 for what would become the President’s Scholarship Fund. A second round of fundraising yielded $500,000 for Seattle U’s Emergency Fund. Both contributed heavily to fulfilling the needs of students seeking additional aid, especially when they couldn’t rely on aid from the CARES Act.

“We’ve got that money, let’s get it where it needs to be—in the students’ bank account,” Scofield said. “We’ve continued to work since then on a pretty much daily basis trying to respond to students who’ve contacted us with situations to see what else they might be eligible for.”

For the past few years, Seattle U has shifted its priorities in regard to how it offers additional financial aid. The slow transition from academic excellence to need-based award offers made it easier to put together financial aid packages from a need-based perspective.

Nielson and Student Financial Services are working to relieve students of the burden through continued financial support, as they understand the long-term impacts of the situation.

“[We’re] recognizing the impacts of the pandemic are not a one-time hit, they’re going to linger, most likely,” Nielson said. “Many will continue to have financial difficulties for not just one quarter, but probably for a much longer period.”

As Seattle U moves into winter quarter, the university will continue balancing student needs with the financial necessities of maintaining a workable budget.