With Six Weeks Down and Four to go, Has Fall Quarter Proven Worthwhile? 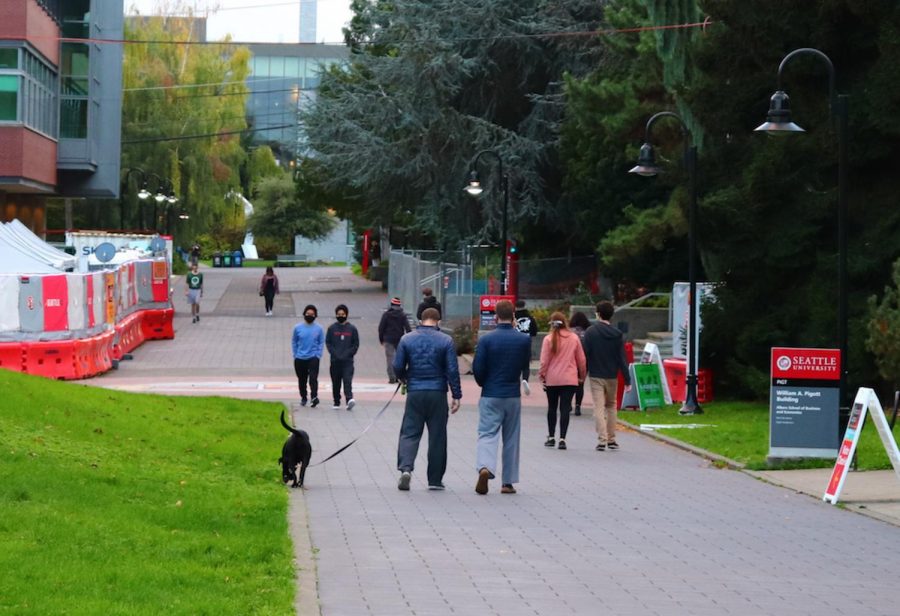 Like many universities across the United States, Seattle University reopened its campus to a limited number of students with revised policies, practices and protocols in wake of the COVID-19 pandemic. Backlash, revisions and updated recommendations from the CDC have been put in place almost weekly, which have received a wide variety of feedback. Whether that be in relation to housing accommodations, food services or the social aspects of community engagement for on-campus students, the question of transitioning Seattle U from a fully remote spring quarter to its current state has resurfaced yet again.

Since the onset of COVID-19, Seattle U has implemented a resources page for all things pertaining to the virus and its effects on university life. There are four subdivisions on the page with information on health and safety, academics, student life and return to campus workplace, but the entire effort put forth with Seattle U initiatives is largely seen through smaller scale changes relating to Housing and Residence Life (HRL).

Timothy Albert, Interim director of Seattle U’s department of HRL, attested to the collaboration of various departments to get the university to where it stands today since COVID-19 began affecting the community.

“I don’t want to say it’s housing and residence, because it’s really a university initiative—housing is one aspect of that,” Albert said. “We’re also talking about facilities, public safety and the Student Health Center (SHC). These are all departments that we’re interacting with on a daily basis.”

In terms of the 7,199 students Seattle U typically enrolls, roughly 700 of those students are currently living on-campus under strict regulations.

“Overall, the biggest thing that we did was not holding everyone to the live-on requirement this year,” Albert added. “The university is having most students live in single rooms paying the same price [at a double occupancy rate]. Obviously, that has hit university revenues some, but from a safety standpoint, most being in a single room and being under 50% of our normal occupancy is one thing.”

Questions and concerns around cleaning and facility management have also surfaced as students, albeit living alone in rooms, share common spaces like bathrooms.

“Bathrooms are being sanitized three times a day. So when custodial first arrives, they sanitize. And there is a difference between sanitizing and cleaning,” Albert said. “We have a lot of students showering and doing their business in between that time, then near the end of the day, they do one more round of sanitization.”

Despite frequent cleaning and sanitization in shared spaces, some previous social hotspots have yet to see the light of day among first-year residents. Student lounges, conveniently located on each floor of Campion, Bellarmine and Xavier Hall, along with communal areas on ground floors, have been closed indefinitely.

“Our custodial staff can only clean so much,” Albert added. “If we had some of those floor lounges, they’d have to be cleaned more regularly. They can only clean so many spaces when they’re having to clean the bathrooms three times, and that’s their biggest focus.”

Another issue Seattle U has faced this quarter involves response rates for safe start health checks. The short questionnaire, which pertains to the health of students, faculty and guests entering campus, is meant to be taken daily—especially for students currently living on campus.

“I don’t think we’ve hit above about 30% of people filling them out daily,” Albert said. “I think a lot of people fill it out if they start to feel a little bit sick, as a sort of test, so that’s still useful.”

More recently, in an attempt to combat low response rates, Seattle U has implemented surveillance testing for those living on-campus. Students are randomly selected, receive an email and are required—at no cost—to receive a COVID-19 test, with efforts to identify those who may be asymptomatic.

Despite diligent efforts from the university and students to combat the spread of COVID-19, a big aspect that is lacking, as seen through the closure of lobbies and shared spaces, is the social component of on-campus living. Although Seattle U now has virtual community assistants and a variety of online resources available for COVID-permitting activities, many first-years feel as though they are missing out on a huge part of why they chose to attend Seattle U in the first place.

Audrey Song, a second-year nursing student and current on-campus resident at Seattle U, didn’t have the bar set high entering the academic year during a global pandemic. However, coming from Cambodia, she figured that minimal interaction with classmates would be better than complete isolation.

“I did not have many expectations for college, but I definitely thought it would be easier to make friends,” Song said. “Virtual classes have definitely impacted a lot of my social interactions. I’m lucky to be on campus, but the socializing during breakout rooms is rough. I am grateful that several of my classes have group chats for us to meet on campus or be able to ask one another questions about anything.”

Kelsey Ota, another nursing student and second-year at Seattle U, has also found that distinct features of group chats and zoom render helpful with virtual learning. Despite being at home for the entirety of fall quarter, she has been able to focus her attention on her studies as well as socialize to the best of her ability.

“The whole ‘virtual college experience’ is super unfortunate. I anticipated it to be slightly more difficult because I find it to be better for me to learn in an environment where I’m actually in the classroom interacting with my peers and professors,” Ota said. “However, because my professors record lectures and provide helpful resources on canvas and during office hours, it makes my transition to have class on a computer screen much easier.”

One area of criticism Seattle U has received relates to new dining protocols. Students are now required to eat individually at all dining facilities on-campus, or with a roommate—if they have one. Per Governor Inslee’s mandate, and as stated in a public statement released by James Willette, associate vice president and dean of students at Seattle U, students are required to only remove face masks at single-occupancy tables for eating, and may no longer eat in groups of five.

“I would like to see different events and ways for students to further connect virtually,” Song said. “I also hope that Seattle U becomes open to having more food options.”

Despite limited food options and ways to connect with peers, the university recreation center (UREC) has made efforts to get students living on-campus moving and socializing with one another.

“UREC has had open rec, but some of that is subject to the weather,” Albert said. “We’ve also instituted game nights. None of these programs have necessarily had large attendance, but the hope is to create a place where people can physically distance but have the opportunity to make at least a couple of connections.”

As fall quarter comes to a close, students, parents and faculty can’t help but look to the future. On Sep. 25, Seattle U President Stephen V. Sundborg, S.J. released an emailed statement in regard to the 2021 winter quarter.

“As we plan for the coming months amid a pandemic showing no signs of relenting and awaiting a vaccine still being developed, the university has decided to continue operating in its current form for winter quarter, which begins Jan. 5,” Sundborg wrote in an email to all current Seattle U students. “This means our courses will continue to be delivered primarily in a virtual learning format, with some in-person and hybrid classes. As is the case for fall, student housing will remain single occupancy and billed at the lower double occupancy rate.”

Although no definitive plans have been released for spring quarter 2021, small changes at the university may be implemented in an effort to increase social interaction among students living on-campus—COVID-19 permitting.

“The mask wearing and physical distancing are going to continue,” Albert said. “The only way some of that is going to change is if there’s new things we learn about the disease.”

Seattle U Provost Shane Martin attested to the uncertainty the university faces looking forward, particularly in light of the past eight months.

“My view is that this is going to be an incredibly difficult year,” Martin said. “We can, and we will, get through this.”

Financially, the university has undoubtedly taken a hard hit. With reduced enrollment, housing and the waiving of recreation fees, Seattle U faces new issues amid a 2020 year that initially started off strategically.

“Seattle U launched its Strategic Plan in January 2020. And then, of course, on March 6, we announced because of COVID-19, that we would be moving into a virtual environment,” Martin said. “We’re very aware that this situation affects our students and their families. We’re concerned about that. And we want to offer support and help where we can.”

Alumni have proven key throughout the COVID-19 pandemic financially, as alumni programs have been initiated to increase contributions to the university.

“We’re definitely not going to allow students to contribute to it,” Martin said of newer initiatives. “But supporters of Seattle, you are being asked to help support our students now more than ever.”Small modifications will continue to be made as Seattle U attempts to increase social interaction while maintaining social distancing protocols, but as for fall quarter, further restrictions and mandates will remain set in place as COVID-19 cases continue to fluctuate across Washington state. The future remains uncertain, and subsequent months will largely dictate how the remainder of the 2020-2021 academic year proceeds.