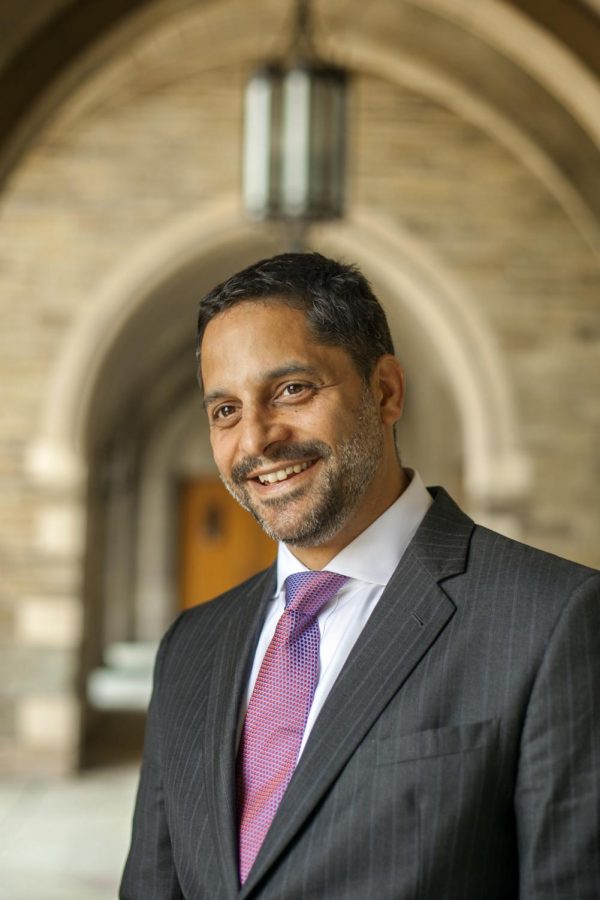 At 10 a.m. Thursday morning, Oct. 22, the Presidential Search Committee announced that Eduardo M. Peñalver will be the 22nd president of Seattle University.

When he assumes office in June of 2021, Peñalver will mark several new milestones in Seattle U history. He will be the first Latino president of Seattle U. In addition, he will be the first layperson to assume the presidency. Both shifts are in line with broader trends of new Jesuit university presidents representing the increasing diversity of the United States, and the dropping amount of ordained clergy.

“The Jesuit identity of Seattle U is an essential part of the institution. It’s a legacy that all the previous presidents and all the Jesuits taught and lived at Seattle U as embedded within the community,” Peñalver said.

He detailed his commitment to furthering the Ignatian tradition of the university.

“It’s something that I feel responsible to carry forward. Obviously not being a Jesuit, that presents a challenge for me, but my goal is to spend a lot of time between now and July—and even after that—immersing myself in the Jesuit tradition and Ignatian pedagogy.”

Peñalver spent his youth in the wider Seattle area in Puyallup. After attending Cornell University for his undergraduate education, he studied theology and philosophy at Oxford as a Rhodes Scholar. He then obtained his law degree at Yale University.

His professional career includes a clerkship for the late Supreme Court Justice John Paul Stevens, teaching at Cornell, Fordham, Harvard and Yale and his most recent position as the Dean of Cornell Law School. As the first Latino dean of an Ivy League law school, Peñalver has a precedent of breaking boundaries in academia.

Seattle U’s news release announcing the selection underscores that when Peñalver assumed leadership of Cornell Law School, he faced “one of the most turbulent periods for American law schools in living memory.” Over the course of his tenure, the school raised $100 million in contributions. Given that Seattle U ran a $5.9 million spending deficit in the 2019-2020 school year, this experience may prove especially pertinent.

He went on to illustrate the strategy he intends to bring from his experience at Cornell.

“You need to also think about how you grow revenue through new opportunities, new degree programs, non-degree educational programs, and then philanthropy.”

The COVID-19 pandemic has created a distinct financial climate than the one in which Seattle U’s 2020-2025 Strategic Plan was created. Peñalver stressed the need to continue pursuing those goals.

“Seattle U should think about it as a transient event. It’s a shock to the system, but you can also learn some things that inform your strategic planning. But I don’t think COVID-19 fundamentally changes the strategic environment, so certainly it’s wise to always be re-evaluating strategic goals in light of new information, but my first instinct on that is to absorb the blow and then, as much as possible, carry on with the plan,” Peñalver said.

The incoming president was asked about whether his approach to education would adjust at Seattle U, which is a markedly different institution than Cornell, which is an Ivy League university with a competitive acceptance rate and academic structure.

“I did start my career teaching at Fordham, which is a Jesuit university in New York, so I have taught in Catholic higher-ed as well,” Peñalver said.

He further stressed the similarities in the universities in which he has served as a professor and administrator.

“Whatever we are offering, the student experience needs to be responsive to the student body, but I think the educational mission fundamentally is the same,” Peñalver said.

He underscored his intention to center the student experience in his actions as president throughout his tenure, and ensuring that the wider community is represented within the university. “One thing that’s been a priority for me throughout my career has been making progress on ensuring that the diversity of the university reflects the diversity of the society on the faculty level, the administrative level, the student body–and that the environment we are creating is a welcoming one and an inclusive one,” Peñalver said.

He continued to speak about the importance of fostering community.

“I can see the benefit of efforts to really focus on bonding students to each other and to the university, and finding ways to accomplish that.”

Peñalver views this as a necessary innovation for modern urban campuses.

“The educational experience in the classroom is obviously crucial, and why people come to universities, but one thing we see  now in COVID, one thing that really brings people to school are the relationships they have with each other,” Peñalver said.

Given the ability to speak openly to the student body, the president elect stressed his receptiveness to feedback and willingness to immerse himself in campus life.

“I’ve always had an open door policy, I’ve really always tried to be accessible to students, as a faculty member or as a dean, and that will be true as a president as well. I look for different opportunities in both structured and unstructured environments to engage with students,” Peñalver said.

He concluded his time speaking with The Spectator by expressing his excitement to connect with all facets of life at Seattle U.

“I look forward to getting to know the Seattle University student body and working with student leaders, and immersing myself in the community and understanding how we can move the university forward together.”

Peñalver’s assumption of the presidency of Seattle U marks a significant change for the university. President Fr. Stephen Sundborg, S.J. will leave his position after 24 years. Over the course of the quarter of a century, Seattle U has seen the creation of the School of Theology and Ministry, the Seattle U School of Law, a student center, a center for performing arts and a multi-million dollar expansion to the library. The Seattle U campus of 1995 is unrecognizable today. Peñalver faces daunting challenges and large opportunities as the 22nd president of Seattle U. What the university will look like in a quarter of a century from now will be influenced in no small part by the decisions made by President Elect Peñalver.