Progress Continues on the Center for Science and Innovation Building 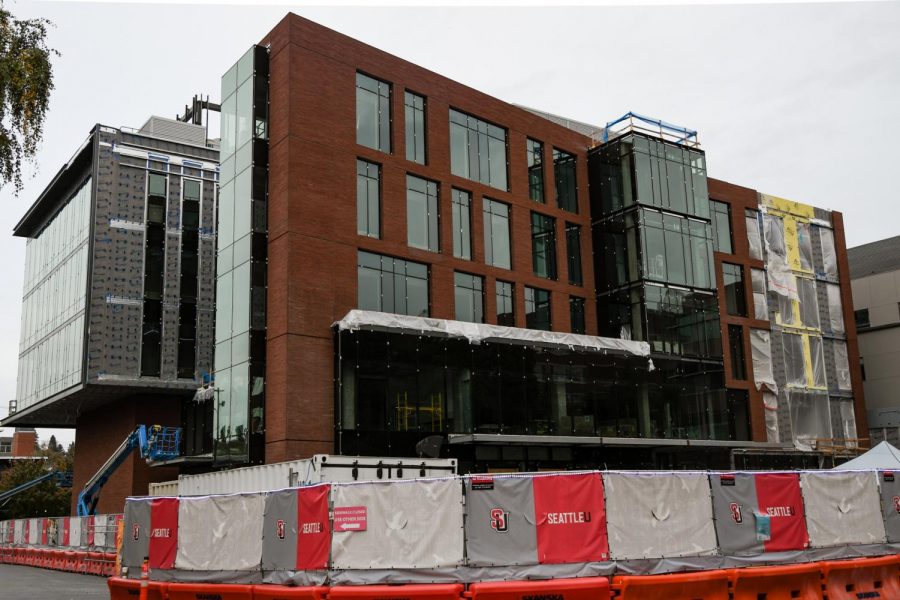 Seattle University’s newest building has come a long way since students left in March due to COVID-19. The construction for the Center for Science and Innovation (CSI) d is set to be complete by May 2021, and ready for student use in the fall.

Not only is Seattle U constructing a new building, but it is also remodeling the preexisting buildings for the College of Science and Engineering: the Engineering Building and the Thomas J. Bannan Center.

The CSI is set to be home to the biology, chemistry, and computer science departments, while the current buildings will remain in use for the engineering and physics departments. Additionally, the CSI will be the new location for Seattle U’s student run radio station, KXSU, and the Center for Community Engagement (CCE) .

Michael Quinn, dean of the College of Science and Engineering, put the architectural improvements of Bannan and Engineering within the context of the expansion of the college itself. Despite an expected small drop in enrollment due to COVID-19, he is still optimistic about the increasing trajectory.

“We’re still planning to grow to 1600 students. And so having this additional space gives us more space for the faculty and the labs that we need to support that number of students,” Quinn said.

The College of Science and Engineering will only be able to use the new CSI if construction is completed on time. Given the circumstances, some are concerned if the building will be finished and accessible on time. Addressing these delays, Quinn shares his concerns regarding the impacts of the pandemic and fires, all which occurred during the process of constructing the building.

“The Department of Electrical Engineering hasn’t been able to reoccupy its space on the second floor of the Bannan Science building yet,” Quinn said.  “[Also,] the renovated labs in the Bannan Engineering building won’t be usable by students until winter term”

Additionally, there are concerns as to the timeline about the remodeling of the Bannan Engineering and Bannan Science Buildings. However, the Vice President and Chief Financial Officer, Wilson Garone, confirmed that the building would be completed on time and within the budget.

Given the current state of the pandemic and witnessing its effect on other schools across the nation, there have been some concerns about how the new CSI will impact Seattle U financially.

“The CSI building budget has not been impacted because it is being fully financed by gifts and bonds” Garone said.  “We have concerns about the financial impact of the pandemic, like any other institution in the U.S., but we have a plan to overcome our challenges. [The CSI] will allow us to invest in new areas of great market potential that will actually help the University financially, rather than pose any negative repercussions for the school financially.”

In anticipation for the opening of the building, the College of Science and Engineering is planning to have all of the teaching and research labs for the biology and chemistry departments, while the Department of Computer Science will use both the CSI as well the renovated Bannan Science building which will have two new classrooms.

Second-year student, Sean Ishikawa, will be one of the STEM major students able to have courses in the building from the start as he is currently a Biology major. He shared his excitement for the CSI discussing how it will benefit himself and STEM majors.

“I think it is great that the school plans to divide the floors in the building pretty much by department. I think it will make things run more efficiently and smoothly for everyone,” Ishikawa said. “It will allow Seattle U to accept more students who want to pursue chemistry, biology and computer science. It may also allow teachers to better bring their lesson plans to life in the new classrooms and labs that are being designed.”

In the event that Seattle U is able to operate in-person next fall, the CSI is currently on-track to be completed and ready for students. While the process has faced several logistical hurdles, university leadership is excited for the new opportunities the building will afford the campus.