Glass Animals Live On The Internet 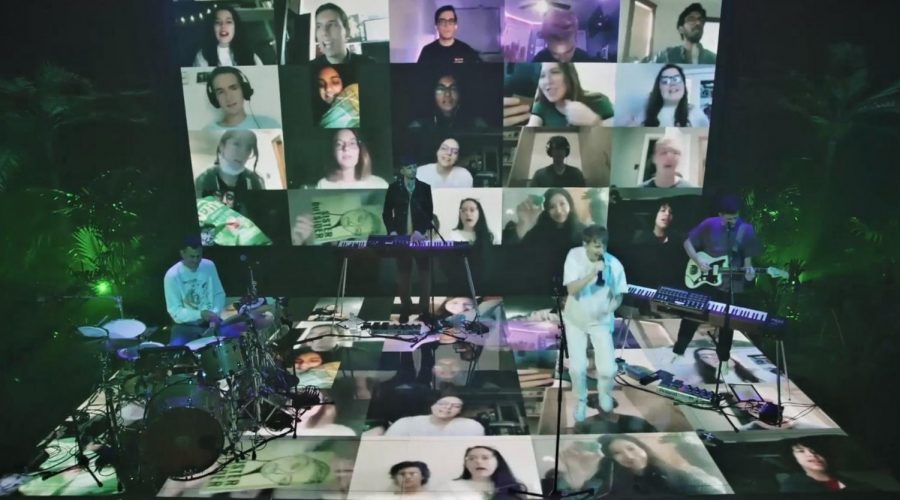 Attending concerts is known as a high point in the social lives of Seattle University students. Seattle is well-known for its music history, which helps to set a precedent for headline names to perform in the city. Before the world was thrown into the chaos of COVID-19.

Glass Animals, an alternative psychedelic pop band, intended to go on tour in Seattle. Listeners were very eager and ordered tickets, instantly selling out shows for their tour. The pandemic changed plans, though, and a virtual concert was the proposed solution.

Back in 2016, Glass Animals was far less popular than they are now, only a few of my friends listened to the band, and fewer obsessed over their discography. They would reminisce upon the lyrics to “Season 2 Episode 3” on Glass Animals’ sophomore album. Some of their most well known tracks, like “Gooey” and “Black Mambo” gained them wild popularity, and they have since performed at huge festivals, notably at Coachella. While the Glass Animals signature sound has retained its electronic and psychedelic rock energy, their newest album, “Dreamland”, has shifted to favor peppier pop sounds.

Steadily gaining popularity over the years, Glass Animals have earned their place as a popular sound of the twenty-first century.

Playing a diverse set of songs during their online show, Glass Animals “Live In The Internet” concert featured songs from their newest album, along with hits from their previous two, “Zaba” and “How To Be A Human Being.”  Old fans and new fans alike were able to enjoy the show thanks to a proper blend of timeless hits such as “Gooey,” “Youth,” “The Other Side Of Paradise,” and new pop favorites “Tokyo Drifting” and “Tangerine.”

During the show, Glass Animals also hosted multiple special guests. Arlo Parks was able to share the stage, offering a verse on “Tangerine.” Denzel Curry also live streamed his rap verse on the song “Tokyo Drifting.” Without sharing any vocals, Kanah Flex instead offered a visual of live contortionism, which added to the mystique of “Hazey.”

Without the sensation of a sweaty room full of clamoring concert-goers, it was difficult to become fully immersed in the performance at times. Despite this, viewers received a few personal boons. Viewers were able to pause the stream and rewatch it anytime within the first three days after the show aired, enjoy the concert without having beers spilled on them and remain within the comfort of their own homes.

The show was best likened to a multi-set music video. Dancing around on a traditional stage, frontman Dave Bayley also explored an extended area to the left and right decorated with jungle undergrowth.

Glass Animals worked to create a concert atmosphere and provide entertainment, and lots of preparation went into the show. With mesmerizing visual effects and guest performances during the show, each song provided its own magical experience. Massive screens displaying moving backgrounds also accompanied each song.

Without the limitations of performing on a stage, the surrounding set that the four-piece band provided was visually enthralling. Featuring a small jungle, a massive tangerine and pineapple which descended from upon high and accompanied by pool floaties, Glass Animals worked hard to provide a proper experience for viewers.

I have no complaints about seeing Glass Animals, and I would definitely say that the show was worth it. However, the palpable energy of a concert simply cannot be felt in the air of your living room.

With no crowd chanting out lyrics, there was no rush of endorphins provided by the online gig. To nobody’s surprise, watching the performance online was nowhere near the energy level of an in-person concert. Regardless of how bouncy Dave Bayley was on screen, his vigor could not be fully transferred through the live stream.

When on campus, many music enthusiasts get their information from KXSU, the student-run radio station. The on campus music scene is suffering similarly to the live music arena in Seattle.

Haley Parsons, a fourth-year Seattle U student and communications major, led events for KXSU last year. KXSU also made sure local and on campus musicians had a place to perform small in-studio concerts. With the arrival of the pandemic and the Seattle U campus shutting down, these intimate shows were also closed down.

“I think COVID-19 is hurting our on campus music scene and KXSU because it’s preventing people from experiencing live music in person,” Parsons said. “I think artists have to continue with this virtual format for in-studios; people can tune in from Instagram or Youtube.

Parsons remained optimistic, trying to visualize the pandemic as a time for creative expression.

“I am hoping that a lot of new, amazing music will be created during this time,” Parsons said. “Everyone’s reacting to it in new ways, so I think on the bright side there should be some good inspiration.”

With COVID-19 continuing to impact the way people interact, new methods of appreciating activities must continue to be sought out. Concerts being forced online is a dramatic change, but it beats no performance at all.

Glass Animals were able to deliver a highly energetic performance regardless of the online restriction by appealing to visual senses. Artists will seek new ways of expressing themselves, and will find inventive ways to turn the online format into an advantage.