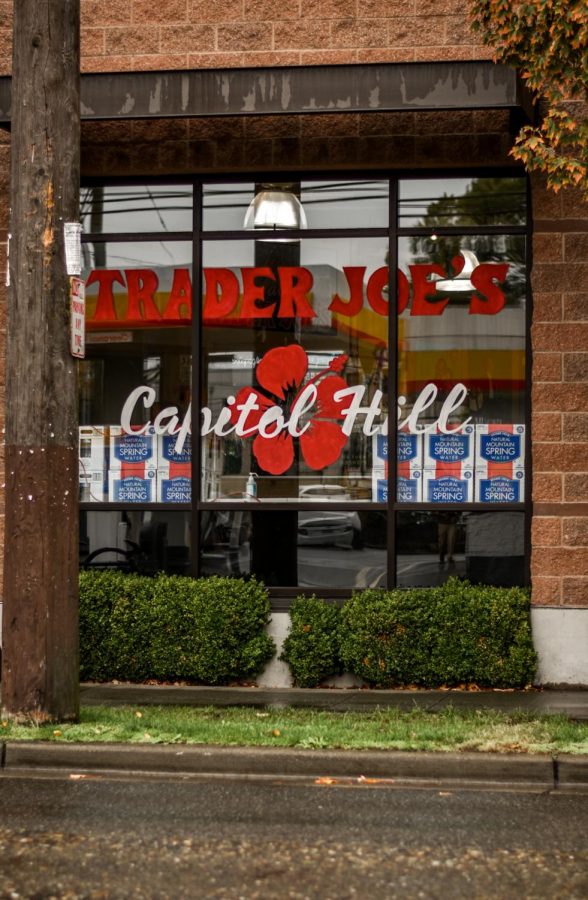 Protesters marched into Trader Joe’s in Capitol Hill on Oct. 2 following a corporate statement prohibiting staff from wearing any form of Black Lives Matter clothing or masks. While staff was told by management not to engage with protesters and quickly move to the back, a few members remained on the floor to aid shoppers and bear witness to the protest.

The Instagram account, @traderjoes130, a page run predominately by Trader Joe’s staff members, released this statement regarding the protest.

“Yesterday, two of those crew members were suspended for their actions and a third quit on the spot,” the account said. “This follows a pattern of retaliation by the company against workers who organize or speak out at Store 130. This also follows a pattern of corporate anti-blackness.”

The protest follows a summer-long string of events, including the store’s closure in June due to staff leaving to join a Black Lives Matter protest and a police call in August which resulted in the arrest of a customer. Management’s response to these events has led to a city-wide boycott of the store as employees and shoppers alike demand change.

As a corporation, Trader Joe’s released a statement on the company website in June addressing the Black Lives Matter movement.

“At Trader Joe’s we uphold the human rights and civil rights of all of our Crew Members and customers and communities. We have no tolerance for racism, discrimination, harassment or intimidation.”

However, the staff feel that this statement was ingenuine, as the company has made active attempts, such as the mask ban, to dissociate from the movement. When asked by The Spectator for a statement on the issue, Trader Joe’s on Madison did not answer.

At the most recent event surrounding Trader Joe’s on Madison, protesters entered store #130 chanting their demands and holding signs. An ex-crew member who is remaining anonymous, recounted the protest.

“It never felt threatening,” they said. “They made it known that it was going to be a peaceful protest.”

Christina Cobb, another ex-crew member, noted that protestors were gathering in disapproval.

“When the protesters came in, their main message was of disapproval of the recent enforcement in Trader Joe’s uniform policy that is lumping in BLM gear to not be worn,” Cobb said. “I was a crew member that got pulled aside with a BLM mask on and told that I could no longer wear it.”

Another demand made by protesters was the removal of a pride flag and Pan-African flag, which are hung outside the store.

Crew members were instructed not to engage with protesters, and to move towards the back of the store behind double doors. Despite these demands, four employees remained on the floor. Bennett witnessed the protest first-hand.

“I didn’t really participate at all, I just wanted to be there as a witness,” Bennett said. “I was still on the clock and was ringing people up as this was going on.”

Although Bennett did not directly participate in the protest, their decision to remain on the floor led to their probable suspension. Bennett quit before their position was terminated, although Bennett stated that if they had stayed, they would have been fired.

Cobb, another employee who remained on the floor, was fired earlier this week for their participation in the protest.

This is one of many controversial decisions from store #130’s management, as actions from this summer have also made headlines.

At the height of the Black Lives Matter protests this summer, Trader Joe’s workers asked for the day off to join a Capitol Hill march June 12.

“If people wanted to go to the protest on June 12, they were told they could get the day off,”  Cobb said. “The verbiage [from management] was that ‘it’s an excused absence, but we just want to get a count of how many people we have to work that day.’”

The day proceeded as normal and staff who requested work off went to the march. However, the excused absence they were promised abruptly changed when management started making calls.

“In the afternoon sometime, the crew members started getting phone calls that the store’s been closed indefinitely,” Cobb said.

According to Cobb, employees were left in the dark for the next three days. After the waiting period, corporate announced they would be shutting down store #130 because crew members were being difficult. To implement change, Trader Joe’s Headquarters decided to let go of 40% of the staff and transfer the rest.

“A group of team members wanted to let the world know [about the closure],” Cobb said. “We were a part of the community, so we put out a petition to keep the store open and it got over 22,000 signatures–even the community didn’t want us to shut down. It was reopened on July 1, and it’s very clear that without [the petition], the store would’ve been shut down.”

Moving forward, the crew at store #130 urges the public to listen to them in order to create change that reflects the community.

“Listen to the employees that just got fired and have been speaking out on and against Trader Joe’s,” Bennett said. “This is not the first time they’ve made a big decision like this expecting it to go under the radar.”

Staff are demanding structural change through a list of five demands; acknowledging Black Lives Matter, not retaliating against workers, redefining safety, investing in the store and crew and establishing transparent and equitable expectations of staff.

The Instagram account @traderjoes130 provides regular updates on these events, as well as in-depth descriptions of these demands.