“Never Have I Ever” is Creating the New Normal 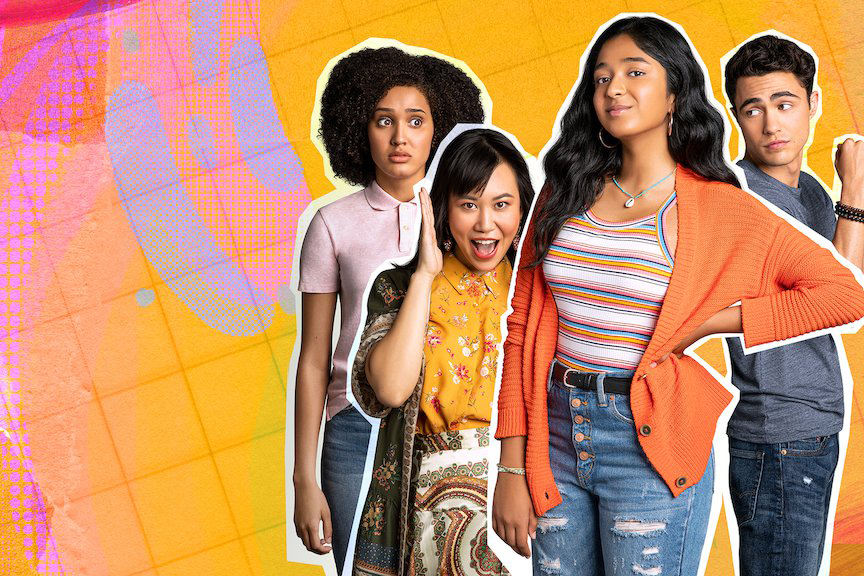 Show Creator Mindy Kaling’s coming-of-age rom-com has hit Netflix, claiming its rightful place among one of the coveted Netflix Top 10 spots. A Netflix Original Series, “Never Have I Ever” documents the life of Devi Vishwakumar, an Indian American girl learning the ins and outs of high school crushes, friendships and family. The heart-warming inaugural 10-episode season brings us back to one of the most painfully relatable times of our lives: high school.

The season begins with Devi’s father suddenly dying, and in dealing with that traumatic loss, she loses feeling and function in her legs, which temporarily paralyzes her from the waist down. In a wheelchair for three months, she miraculously stands up much to her mother’s astonishment. This happens within the first episode, and already the normalization of mourning, mental health and varying physical capabilities are present within the show. She begins to see a therapist regularly, which helps to normalize conversations surrounding these themes.

Providing a more inclusive viewing experience, “Never Have I Ever” makes serious headway in creating television that is relatable for a wider range of audiences, including diversity that is commonly left out of the rom-com canon. Covering bodies of different abilities, mourning from both the angle of parent and child, and the representation of different races exercising a variety of skills and occupations, are just ways “Never Have I Ever”is a far more personable and progressive show than its counterparts.

Devi’s cousin, Kamala, played by Richa Moorjani, moves from India to attend CalTech to earn a biology degree and lives with Devi and her mom. An arranged marriage is set up for her while she is in the United States, though she is apprehensive because she falls in love with one of her CalTech classmates. For Richa Moorjani, the plotline of the arranged marriage was important to her— she didn’t want it to have the stereotypical American T.V. slant.

Kamala represents a hybrid family and the conflict of familial duality, unsure if she is willing to go through with the marriage her parents had planned. Devi at first resents her, viewing Kamala as the “perfect Indian daughter” that her own mother has always wanted.
Another plus: the show is unabashed in its portrayal of smart girls who want to have sex. Devi and her friends have their curiosities and do their fair amount of research, and it’s refreshing to see high schoolers (mostly) portrayed as age appropriate, curious teens trying to find their way through the complications that come with growing up

Devi’s main love interest, Paxton Hall-Yoshida, is played by 29-year-old Darren Barnett—which seems kind of off seeing as he plays a 16-year-old—but Devi and her friends are played by 18-21 year olds, which is at least a little closer to 16 than 29. This casting mirrors an industry trend in which young adult actors are cast into roles of much younger characters, thus creating a skewed impression of what high schoolers for viewers as to what an adolescent “should” look like.

Her best friend Fabiola also comes out as gay in the show, and is met with acceptance and adoration from her friends and mom, yet another norm so well-destructed as many shows maintain the archetype that gay characters are unnaccepted by friends or family.

Carrying many important themes that are finally included in a mainstream series, the show maintains a light, childish touch that balances with Devi’s emotional conflict in her relationship with her mother, the multiplicity of her mixed identities and the excitement of many firsts, including a first kiss. For example, the thrill of Paxton liking her Instagram video is one all too familiar to anyone interacting online with a crush.

Moments like these bring a sense of high school relatability to the forefront of viewers’ minds, making it clear that everyone gleaned at least some of the same experiences from high school—no matter who they are or how they identify.

The high praise of the show has earned it a Rotten Tomatoes rating of 97%, which isn’t the end all be all of success, but does say something about its public perception. It has also continued to maintain its spot on the Netflix Top 10. Hopefully this achievement will inspire shifts in the types of shows created for young people. Though the importance of intersectionality does not stop at the media we consume, the representation in “Never Have I Ever” is a real win for everyone and hopefully a step in a more diverse direction.