30 Deep Cuts for Your Quarantined Ears 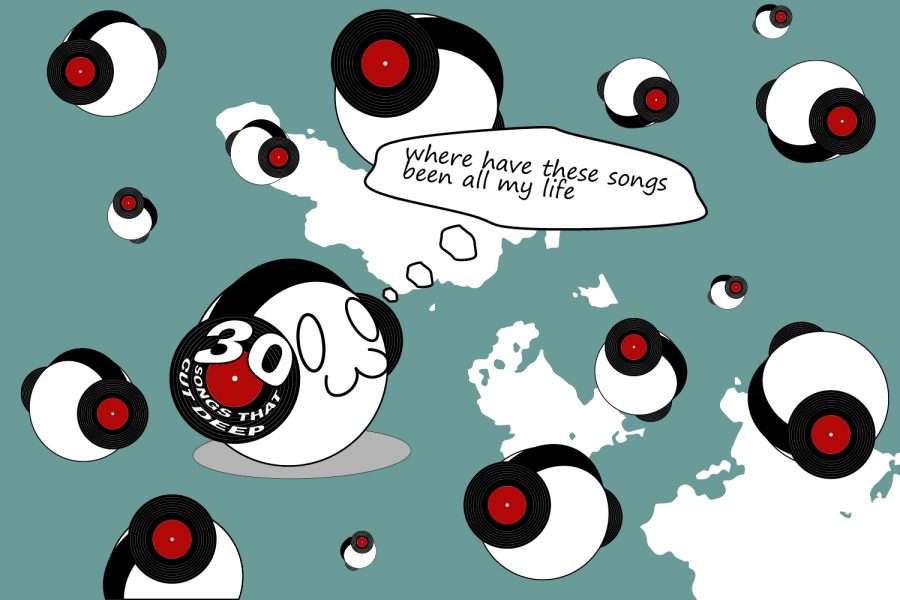 In the thousands of years that music has been around for, it has come in many lengths and tunes. The 30 songs below represent what I consider to be some of the most unfortunately overlooked songs from the past 80 years.

If you are interested in hearing more, these songs can be found on these Spotify and Apple Music playlists. Though the songs may not flow together well, they each have their own uniqueness.

Bob Marley & The Wailers received worldwide recognition for their albums “Exodus” and “Legend,” but their earlier work is often overlooked. This Song is from the group’s second album “Soul Rebels,” and was produced by the infamous Lee “Scratch” Perry.

This song by American blues guitarist Albert King is from his critically acclaimed album, “Born Under a Bad Sign.” The album is filled with songs that defined blues in the 1960s, but this song sticks out from others due to its slow, moseying sound.

This song, from Canadian singer-songwriter Andy Shauf, is from his conceptual album “The Party,” which is about his observations of a party. “The Magician” earned Shauf a nomination for Songwriter of the Year at the Western Canadian Music Awards and a nomination for Recording Engineer of the Year at the Juno Awards. The song has a beautiful orchestral sound and thought-provoking lyrics.

From Big Youth’s 1972 album “Screaming Target,” this song beautifully displays the musical diversity that Reggae had to offer during a time when the genre was begging to move into the American and British Mainstream.

The title track from Arlo Guthrie’s 1967 album, “Alice’s Restaurant,” is the protest anthem that allows the listener to laugh at and loathe the Vietnam War at the same time.

Caetano Veloso, “You Don’t Know Me”

This song from Brazilian singer Caetano Veloso’s underappreciated 1972 album “Transa” is an acoustic look into being misunderstood. The song begins quiet and timid, but builds into a beautiful release of Veloso’s feelings.

Captain Beefheart is often thought of as a strange figure in music and is most commonly known for his 1969 album “Trout Mask Replica,” which was ranked #60 on Rolling Stone’s 500 greatest albums of all time. This song was released in 1999 on a compilation album titled “Grow Fins: Rarities 1965-1982.” It features simple lyrics that carry heaviness and a sound that is unusually normal for an avant-garde musician like Beefheart.

Chaka Khan, “I Feel for You”

This song won Chaka Khan her fifth Grammy. Though it certainly was a hit in 1985 when it came out, it seems to have been forgotten overtime. It is a quintessential 1980s hit.

This catchy song is from Cobra Man’s 2017 album “New Driveway Soundtrack.” Cobra Man, though a still up-and-coming group, is known for taking the cheesiness of 1980s music and using that sound to create music that resonates as wonderfully out of place in the 21st century.

Coolio is best known for his strange hair and his 1995 hit “Gangsta’s Paradise.” This song, also from 1995, features an uplifting message and samples “Canon in D Major” by Johann Pachelbel, also known as “the wedding song.”

Though “Beautiful Reasons,” the album that this song is featured, was released in 1990, The Cry did not get the recognition that they deserved for this song or this record until 2016 when it was featured in “I Like it Here Inside My Mind,” a skate video by the company Polar.

“I Love Sloane” Is from Delroy Edwards’ 2016 album “Hangin’ at the Beach.” Both this song and the album are strange in a very regular way. The sound that Edwards pursues in this song, with its lo-fi simplicity, questions what it is that draws people to music.

“Game and Performance” by Deux is an enjoyable example of accessible electronic music. This synth driven song sounds like what people have thought the future would sound like since the 1970s.

This song from ESG’s 1983 album “Come Away with ESG” is a simple song of drums, bass, cowbell and vocals. Its simplicity, however, is not a failure. This song proves the point that flash complicated musical arrangements are not always needed to make a great song.

Having played with the greatest musicians of his time, Fela Kuti is a musical legend. This song, the title track from his 1976 album “Zombie,” was recorded as a musical attack on the soldiers of his native country, Nigeria. The Nigerian military responded to this song by sending 1,000 soldiers to his commune where they beat Kuti severely, fatally threw his mother out of a window and burnt everything in sight to the ground. Kuti’s response to this was to send his mother’s coffin to the residence of the general responsible for the attack.

Friar Tuck and His Psychedelic Guitar, “All Monked Up”

“All Monked Up” is from Friar Tucks self-titled 1967 “Friar Tuck and His Psychedelic Guitar” album. The song sounds like the 60s, and to cement Tuck even further into the decade, he was once almost murdered by Charles Manson after the two took acid together in the desert.

One of Fugazi’s lesser known songs, “I’m so tired,” is a slow piano ballad from the group’s 1999 album, “Instrument.” This song represents the softer side of music Ian Mackaye wanted to explore when he disbanded the famous D.C. Punk band Minor Threat to form Fugazi.

Funkadelic, “I Miss My Baby”

Featured on Funkadelic’s 1971 album, “Maggot Brain,” “I Miss My Baby” has some of the most impressive vocals in the group’s discography. The song is a dramatic tale of heartbreak and a fantastic end to an incredible album.

“Hey” is from Butthole Surfers 1983 titled “A Brown Reason to Live.” The album features vulgar pop-culture references, harsh instrumentals and at times, concerning vocals. Strangely enough, given their name and odd music, The Butthole Surfers were decently in the mainstream during the 1990s.

KMD is best known as the rap group MF Doom was in before his solo career. “Peachfuzz” is on the group’s first album, “Mr. Hood.” The song is refreshingly smooth and playful.

“Stick Together” is a bonus track from the infamous Lee “Scratch” Perry’s influential album, “Return of the Super Ape.” The album signifies Perry finding a definite style for himself, one that he brought to the work of other artists as a producer. “Stick Together” is an early example of his unique sound.

“M-16” is the title track from Lone Rangers 1996 album. The song is slow and melodic and highlights the echo effect that is common in Reggae.

“South Side” comes from Moby’s most successful album, “Play & Play: B Sides.” It sticks out on the album as one of the more commercial sounding songs, but it still has an interesting electronic feel.

People Under the Stairs, “The Love”

“The Love” is from the 2015 “The Gettin’ Off Stage, Step 1” EP from People Under the Stairs. It is a refreshingly positive song with a funky beat.

“Colors” by Pharoah Sanders from his successful album “Karma” is a beautiful appreciation of the simple parts of life. The song is a collaborative effort by Sanders on saxophone and Leon Thomas on vocals.

“Early Summer,” from self-taught pianist Ryo Fukui’s 1976 album, “Scenery,” is a greatly underappreciated piano piece. Though the album received appreciation from Japanese fans— it was essentially ignored by Americans.

“Love Me for Real” from Rim Kwaku Obeng & K.A.S.A. is a playful funk song. It has a full-bodied sound with a diversity of instruments to fill its eight minutes.

The Specials, “Do Nothing (Feat. The Ice Rink String Sounds and Rico)”

“Do Nothing (Feat. The Ice Rink String Sounds and Rico)” from The Specials is a perfect representation of what ska should be. With synth and tasteful horns this song is able to overcome the bad reputation that many people associate with the genre.

Thin Lizzy, “Still in Love With You (Live)”

From Thin Lizzy’s first live album, “Live and Dangerous,” “Still in Love With You” is a beautiful ballad of heartbreak. The live aspect makes the already moving song even more intimate.