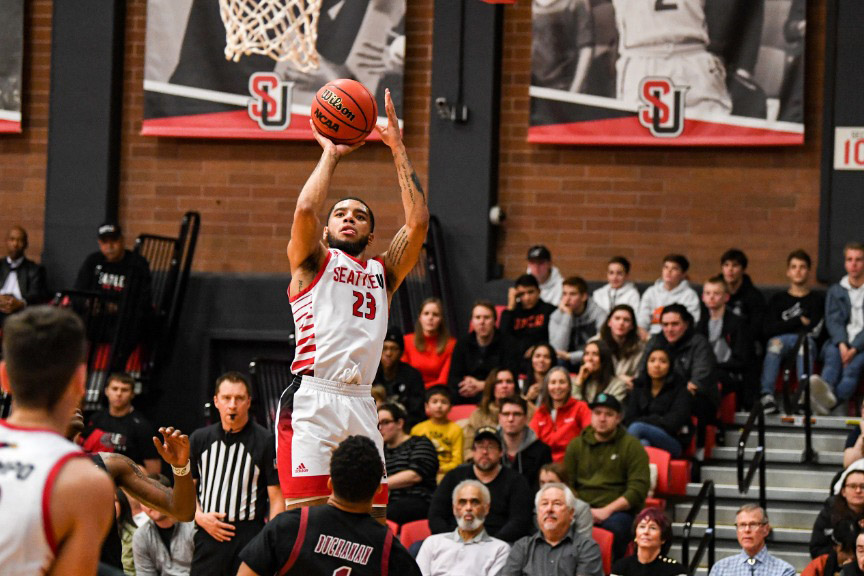 Courtesy of Seattle U Athletics

Terrell Brown, Seattle University men’s basketball stand-out and redshirt junior, announced his transfer decision via Twitter on April 6. The guard will be joining the University of Arizona this offseason as a grad transfer, after drawing attention from University of Washington (UW), Washington State, San Diego State, Boise State, Arkansas, DePaul and Oregon State.

“Terrell should be congratulated and celebrated, he has done everything we ask of our athletes, which is do your best off the court, get your degree, and do your best on the court, and he was one of the best players in the conference,” Head Coach Jim Hayford said.

For his last year of eligibility, he will be joining Arizona while he pursues his masters degree.
A Seattle native and Shoreline Community College transfer to Seattle U, UW’s basketball program vied to keep Brown local and bolster their guard talent this offseason. As the only Redhawk to start all 29 games last season, he led the team and the Western Athletic Conference (WAC) with 20.7 points per game. This put Brown at 20th highest scorer in the nation, and earned him remarks from ESPN as a likely Player of the Year in the WAC.

Brown and Guard Aaron Nettles both competed in high school, with Brown at Garfield and Nettles at Seattle Prep. Nettles pointed out that growing up in the same “tight-knit” basketball community made sharing the court that much more special, especially “with someone as talented as [Brown].”

“I can honestly say I gained a lifelong brother,” Nettles said. “From battling against each other in the metro league to sharing the same court in college was a pretty special thing and I’m glad I got the opportunity to do so.”

Brown’s offensive power made him a regular high scorer, scoring in the double figures in all but one game. He hit 31 points, a career high, four times and surpassed the 20-point marker in an impressive 16 games.

“I think the most obvious thing people saw from Terrell last year was his ability to score and get points for our team,” Nettles said. “What people didn’t see is the leadership and competitive spirit that he brought to every practice which ultimately made our team better. That’s what I believe makes [Brown] hard to replace.”

Brown was a three-time preseason First Team All-WAC and WAC Player of the Week. This season, he was named to the first Team NABC All District 6 and first team All-WAC.

Aaron Nettles has focused on setting the example each and everyday at practice as he moves into his key leadership position as the lone senior on the squad.

“Going forward, we couldn’t be more excited to get out on the court,” Nettles said. “Coach Hayford has this quote that he said my freshman year, and it’s still stuck with me: ‘if you’re not looking forward, you’re looking the wrong direction.’”

With incoming recruits, the Redhawks are prepared for the daily work and pay off that lies ahead.

“We’re working really hard to put together our team,” Hayford said. “We are excited for the players we’ve been developing in the program that [are moving] on to their upperclassmen years.”