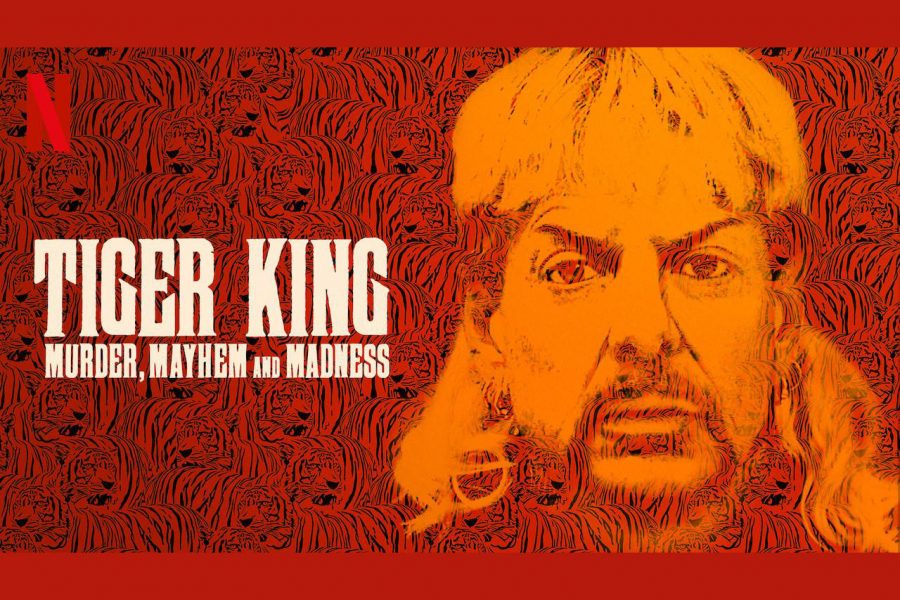 After its release in March, the Tiger King docu-series has quickly risen to the top 10 most watched list on Netflix.

Netflix released a new docu-series “Tiger King: Murder, Mayhem and Madness” which provides the trademark true-crime catharsis during this difficult time of social distancing. Such a fast rise to popularity comes with what seems to be an endless supply of memes and conversation. This is almost expected—every episode of the seven-episode series contains many absurd twists and turns. However, there is a deeper conversation to be had about “Tiger King” beyond the amusement.

There are themes in “Tiger King” that are recognizable from news outlets in the past few years. There seemed to be a parallel to predatory men in entertainment and notable animal keeper “Doc” Antle. Antle owns a private zoo and essentially runs a cult, separate from Joe Exotic’s own property. His “zookeepers” consist of women who had to sleep with him in order to become zookeepers.

Antle is married to many women—most significantly younger than him—and he strips away their identity and renames them. It was disturbing to watch these women talk about how they were renamed. I could only think about how their agency and life was stripped from them as Antle used the young, vulnerable women to make a profit.

In “Tiger King,” another problematic theme is the main character Joe’s apparent manipulation of straight men. While bisexuality is a real and valid sexual orientation, Joe’s ex husband and late ex-husband never claim to be gay or bisexual. Joe’s third and fourth husbands—John Finlay and the late Travis Maldonado—identify as straight and discuss this on camera. Joe wields his power—and his tigers—to coerce these men into relationships by preying on their drug addiction and showering them in gifts.

The problems do not end there. One of the biggest memes and controversies circulating is that Carole Baskin—the owner of Big Cat Sanctuary and nemesis of Joe—may have murdered her second husband. Joe goes out of his way to demonstrate possible theories on how Baskin could have committed the crime, and repeatedly calls for her to be locked up in jail.

Joe does not tread lightly and is sure to antagonize anybody who criticizes him. He makes graphic videos threatening Baskin, such as shooting a blow up sex doll as well as calling her loaded expletives. In the Netflix show, Joe creates Baskin’s origin story and viewers eat it up.

Due to Joe’s hate, and the hat of the viewers, Baskin became infamous for being the crazy cat lady who murdered her husband. Though some people in Baskin’s late husband’s life have theories about Baskin as well, they are not broadcasting their hateful thoughts to their world.

I am not defending Baskin nor am I sympathizing with her, but I think Joe was too over the top and should have been investigated for his threatening behavior far before the initial investigation, which only happened after he hired somebody to murder her.

Lastly, Joe is an apparent racist. The docu-series excludes any mention of his racism or of any accusations and complaints from people. The director of the series, Rebecca Chaklin, confirmed speculations about Joe’s behavior, stating that he is a “categorical” racist. When asked why they did not include the racist remarks he made on tape, Chaklin claimed it was because it did not fit the angle they were approaching the series with nor how Joe “evolved.”

Joe was incredibly ignorant and it shows. The man ran for U.S. President and Oklahoma Governor in 2016 as a libertarian before he even knew what a libertarian was. Joe demonstrated multiple violent threats and the producers kept it in the series, so why not just fully expose Joe for the racist sociopath he was? Why would racism not fit their angle if the series makes it clear that even his associates opposed him in the end? If the point of the series is to give viewers the full scope of Joe Exotic’s character, these omissions do not serve the completeness of the character.

Instead, there are people sympathizing with Joe. Though he seemingly had a difficult childhood and suffered through losses in his life, there is little left to sympathize with when we consider his treatment of animals, his husbands and Baskin herself.

While Joe thought he was high and mighty, dubbed as the “Tiger King” and seated upon a red velvet throne, in reality, he was manipulative, aiming to hurt those around him to get the fame he wanted.