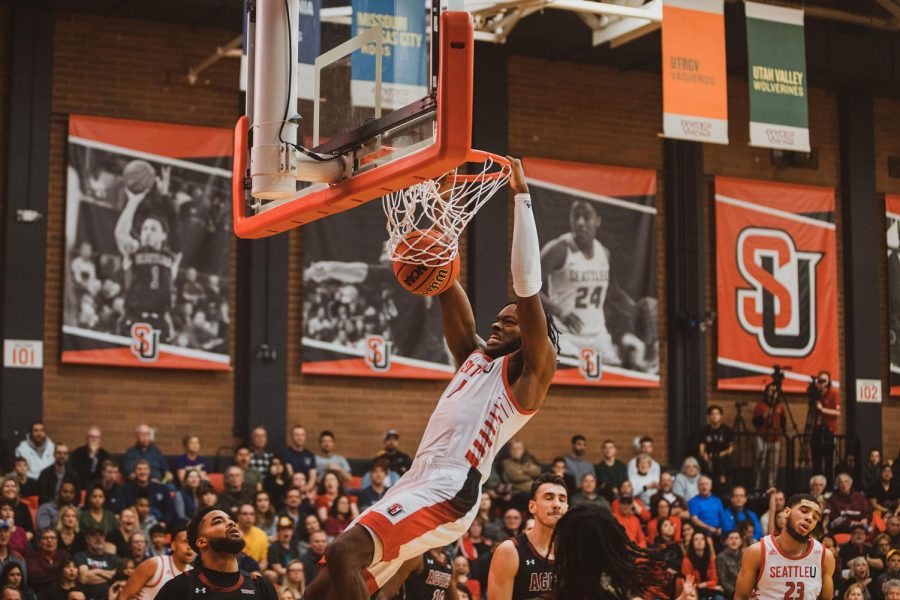 Senior Myles Carter was dismissed from the Seattle University Men’s Basketball team this past week due to student conduct issues.

Carter was the team’s best post, which is the player facing away from the basket and someone who faces high amounts of physical contact. He was getting an impressive average of nine points per game and led the team on rebounds. His removal is a blow to the team’s scoring potential

The school will not speak on the reasons for Carter’s dismissal, but it confirmed that Carter was removed from the roster near the end of February. Head Coach Jim Hayford released a statement on the issue, declining to say anything else on the matter at this time.

“Myles continues to work with me daily on his academic progress and is on track to graduate in June,” Hayford said in a statement. “I had to make the difficult decision to remove him from the team, but he remains a valued member of our university community.”

This is not Carter’s first dismissal from a team, with him being removed from Seton Hall University’s Men’s Basketball team in 2016. Although no specific reason was cited for Carter’s dismissal from that team, the coach said he was released for failing to uphold his role as a student-athlete and was removed for academic reasons.

Besides the dismissal of Carter, the team faces mass cancellation of games, with the final two games of the regular season being cancelled due to fears of novel coronavirus. It remains to be seen if this pattern of cancellations will continue to the WAC tournament.

Chicago State University cancelled their games against Seattle U and Utah Valley University, citing fears of coronavirus as a reason not to travel. The cancellation of Chicago State was quickly followed up by Seattle U’s final opponents in the regular season, the University of Missouri Kansas City. These cancellations are actually some of the first of any college sports programs due to novel coronavirus. Seattle U released a statement of understanding about the cancellation, appreciating the schools for their caution but also reassuring the campus about the outbreak.

“We respect Chicago State and Kansas City’s decisions and understand their concerns. We share a commitment to ensuring the health and safety of our communities, fans and all who attend university-sponsored events,” a statement released by the university said.

“Seattle University is actively monitoring and responding to this rapidly evolving situation and continuing to follow the guidance of public health agencies and make decisions based on the most up-to-date information available. There has been no recommendation to suspend campus operations, including athletic contests, or restrict travel in the United States at this time.”

When asked about how he felt about not being able to play against opposing teams, Coach Hayford responded with an understanding of keeping players and students safe by limiting travel.

“It’s a bummer not to play the games,” Hayford said. “As a society, the people that lead us nationally, locally or even at the school, history will show that they either overreacted or underrated but all you have is the information that you have now. So our position is that we respect just how hard it is to cancel, so in the long run a basketball game can come out to be very insignificant.”

Moving into the Western Athletic Conference (WAC) tournament, the Redhawks are looking to be in good shape. Other than the loss of Carter and First-year Mikkel Hauge, who had a knee surgery, the team is in full fighting shape going into the WAC conference. The men’s team is seeded third in the eight-team bracket, with their first game of the tournament on March 12 against Utah Valley University.