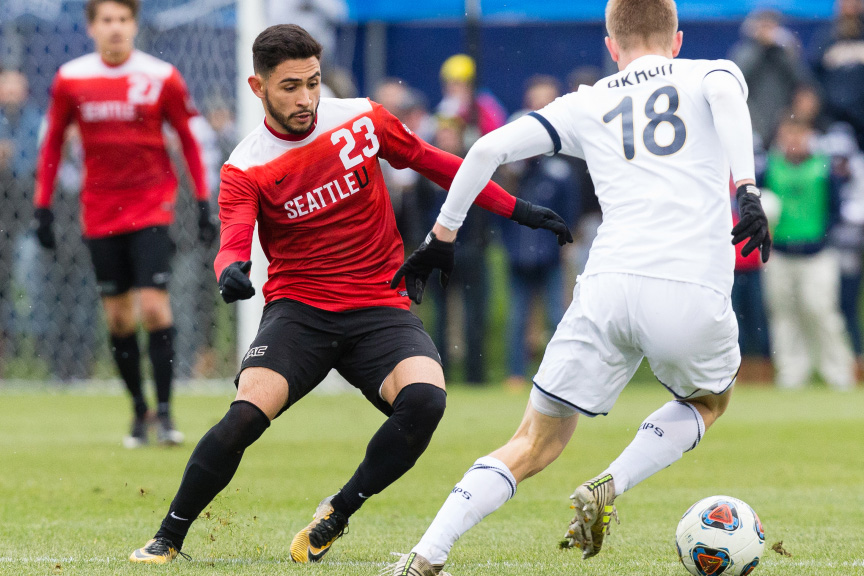 Courtesy of Seattle U Athletics

Thriving as a full-back defender, having played 28 games for the team—including 14 appearances for the club’s United Soccer League’s (USL) side, Roldan recently received a contract extension with the Sounders prior to their season home-opener on Feb. 27.

Roldan, a native of Pico Rivera, California, began his soccer career at CZ Elite before moving to the Seattle area to compete for the Redhawks. Competing in four full seasons, he was the captain of the team and started in 82 games from the 2014-2017 seasons.

During his collegiate career, Roldan scored 18 goals, 17 assists and attempted 101 shots on goal. In the 2017-2018 MLS Superdraft, he was drafted by the Seattle Sounders FC and played for the team for a short period before officially being signed by the team.

The former captain of the Redhawks has started 12 games in the MLS for the Sounders throughout the past two seasons. After 1,174 minutes of action, he got two assists and officially got his contract re-signed by the Sounders on Feb. 17, 2020.

Roldan adopted a new role on the field with the Sounders and has become a skilled defender for the team. Roldan became right-back after the Sounders lacked options following the transfer of players Kim Kee-hee to Ulsan Hyundai and veteran defender-Roman Torres to Inter Miami.

“We’re excited to bring back Alex for another season in Seattle and see how he does at a new position,” General Manager of the Sounders Garth Lagerwey said in a statement.

In his newfound role within the team, Roldan proved that he had the tactical flexibility—one attribute that every modern-day soccer coach searches for. Players need to be able to adapt to new positions and meet requirements demanded by both coaches and teammates.

Historically, there have been several successful shifts in position, such as Trent Alexander-Arnold of Liverpool FC, who had a long period of youth career playing midfield then went on to play defensively. Roldan could follow that path, and it could give him an opportunity for a call-up to represent his country on the national team.

Roldan is among the sixth Seattle U alumni who received an opportunity to play in the MLS in the last four years, and he still has a bright future ahead.