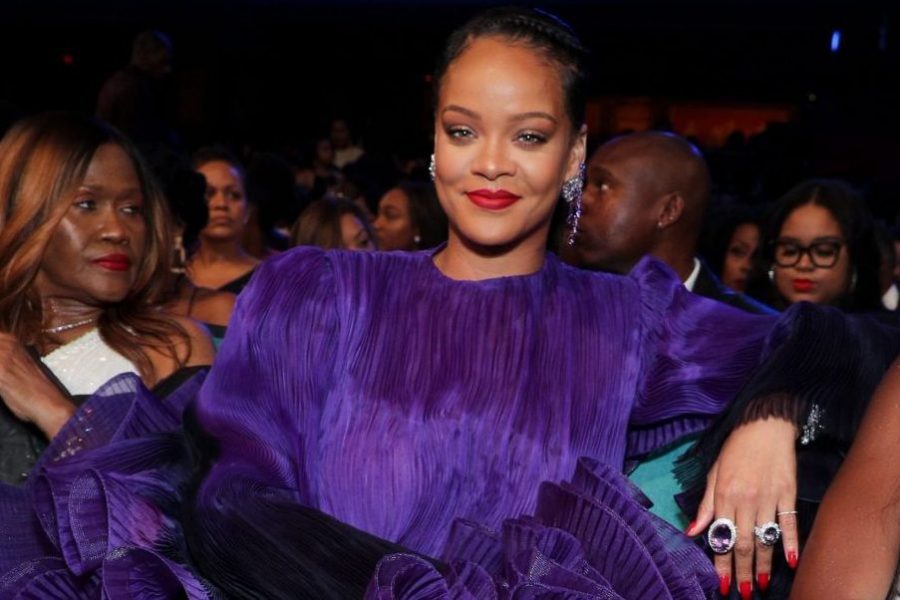 Donning a purple ruffled couture Givenchy gown from the labels spring 2020 collection paired with matching Manolo Blahnik Palori sandals laced up to her calves, Rihanna was prepared to make a statement at this year’s 51st Annual NAACP Image Awards.

Since founding the Clara Lionel Foundation in 2012, a non-profit organization named after her grandmother that funds various global education and emergency preparedness programs, Rihanna has raised millions largely due to the proceeds collected from her annual Diamond Ball gala.

In recent years, the singer turned fashion make-up mogul has been celebrated for both her philanthropic efforts and her life dedication to the advancement of people of color.

In 2017, she was rewarded with the Harvard Humanitarian of the Year award for her part in building oncology and nuclear medicine research centers in her hometown of Bridgetown, Barbados. The center would bring easier detection and treatment of breast cancer in the region.

And In 2018, she diligently worked with French President Emmanuel Macron as an ambassador for the Global Partnership for Education, focusing on funding accessible education for developing countries.

This February the National Association for the Advancement of Colored People bestowed Rihanna the prestigious President’s Award in recognition of her special achievements and distinguished public service. What took the internet by storm wasn’t the mogul’s outfit, but her motivating 3-minute acceptance speech.

She began the speech acknowledging her philanthropic role, highlighting the reality of the work already being done and yet to be done.

Globally recognized celebrities like Rihanna tend to be the ones receiving awards and posing on the red carpet, while the people who have dedicated their lives to social change go unrecognized and unnoticed.

Part of Rihanna’s mission has been to integrate herself within various organizations and causes without seeming like a staged photo-op. Many weren’t even aware of the extent of her philanthropic efforts until she accepted the humanitarian award from Harvard in 2017.

She discussed how we often put our complex societal issues into separate categories, leaving those most impacted to tackle issues alone.

The remainder, and overall theme, of the speech tackled bridging the divide between communities across the globe.

“If there’s anything that I’ve learned, it’s that we can only fix this world together. We can’t do it divided; I cannot emphasize that enough,” Rihanna said.

This is Rihanna’s core message, not just within the confines of a speech but within all her innovations.

Whenever I watch or read the news, I get this overwhelming feeling of hopelessness. How can one person alone fix all the broken systems within our global societies? How can we look forward to a brighter future when the present seems so grey and bleak?

Discussions in my current courses have enlightened me, there’s a new generation shouting from the rooftops, demanding change for a number of underrepresented groups.

Rihanna urged viewers to “tell your friends to pull up,” from there we’ll have already started bridging the divide.

She closed her speech with some choice words of wisdom whose meaning changes as I continue to learn and mature, “Imagine what we can do together.”