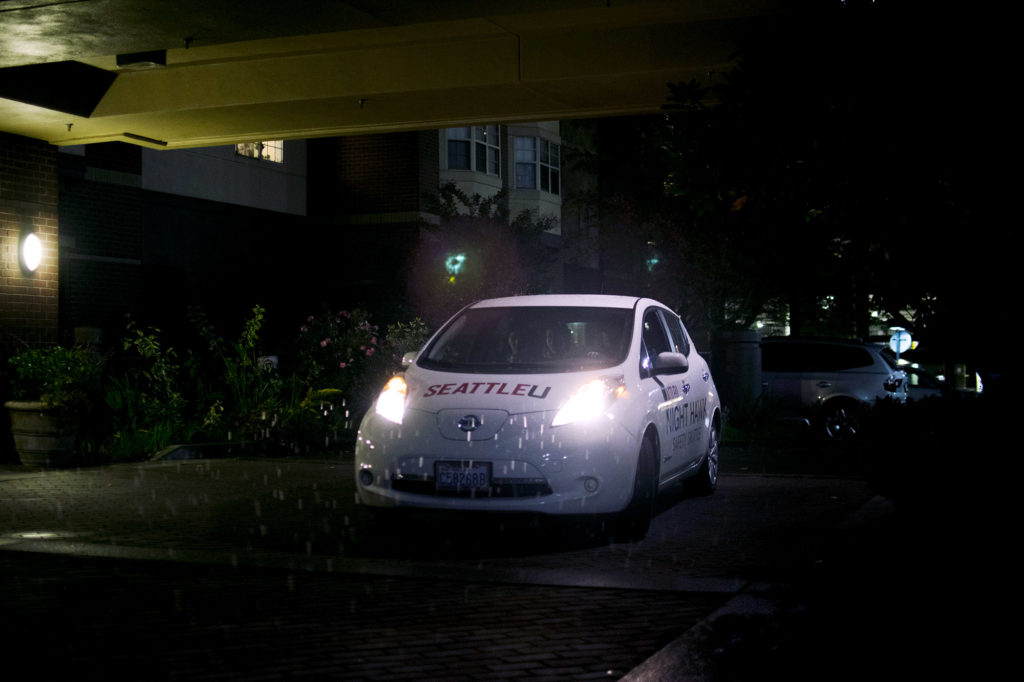 The Seattle University Public Safety department has decided to discontinue their wheelchair-accessible NightHawk van service and their electric NightHawk vehicles. According to Executive Director Craig Birklid, this is a result of budget cuts and lack of demand.

The NightHawk service is a free driving service available to all Seattle U students via an application called TapRide. While using it, the student may input an address approximately six blocks off campus and a university location to be placed in a queue of students waiting for the service.

A driver will pick up a student and drive them either from an on-campus to an off-campus location or vice versa. The service is available from 6 p.m. to midnight during the week and until 2 a.m. on weekends.

Public Safety began a three-year lease for wheelchair accessible vans in 2016, and Birklid chose not to renew the van’s lease after it expired this year. Birklid cited low demand as the key reason for the service’s removal, in addition to a decreased Public Safety budget.

Birklid said that if a student needed an accessible vehicle for transportation, they would have to use a taxi or rideshare service instead. He said that Public Safety would be able to help arrange for this ride or escort the student two blocks off campus, but the student would have to pay for the service.

Hailey Dice is co-director of Seattle U’s Students for Disability Justice club and said that the van removal follows a familiar pattern, in which students are not made aware of the resources available to them—such as a wheelchair accessible van— and those resources are then removed due to lack of use.

“It’s kind of this weird cycle that we’ve noticed over, at least the past three years that I’ve been at Seattle U, this cycle of things are available and people don’t know about it, so then they go away, and it’s hard to get them back,” Dice said.

Birklid said that the department would have to see significant demand for the vehicle in order to financially justify a renewal of the lease on the wheelchair accessible van. The van costs about 11 thousand dollars to operate per year and was used for about 2400 miles in the past three years, according to Birklid. He said that recent years of budget cuts have made this program too expensive to run.

Dice said that services such as the accessible van are necessary to students on campus, and that having them more available and accessible help to destigmatize use of the services.

“Obviously, people are still using all of these programs and they shouldn’t get rid of them,” Dice said. “I don’t think any of them should be gotten rid of some, maybe some different capacity, but definitely not gotten rid of that.”

Birklid additionally decided not to renew Public Safety’s lease with their electric vehicles, again citing cost as the prohibitive factor.

Co-Director for Students for Disability Justice, Juniper Bee explained their frustration and observations from past experiences with using the Nighthawk service.

“You can’t call a Nighthawk to take you to the other side of campus. They can walk you across campus but they can’t drive you from one part of campus to another,” Bee said. “I’ve tried and they’ve told me no and to my understanding, their contract with the new van service doesn’t have a wheelchair accessible van this year.”

Dice said that to more fully support students with disabilities, the university needs to invest their budget and resources into programs—like Public Safety—which these students need.

“On the administration side, keeping the financial support and the faculty support for all of these programs is super important as well.”