What it Means to be a President, as told in 45 Plays 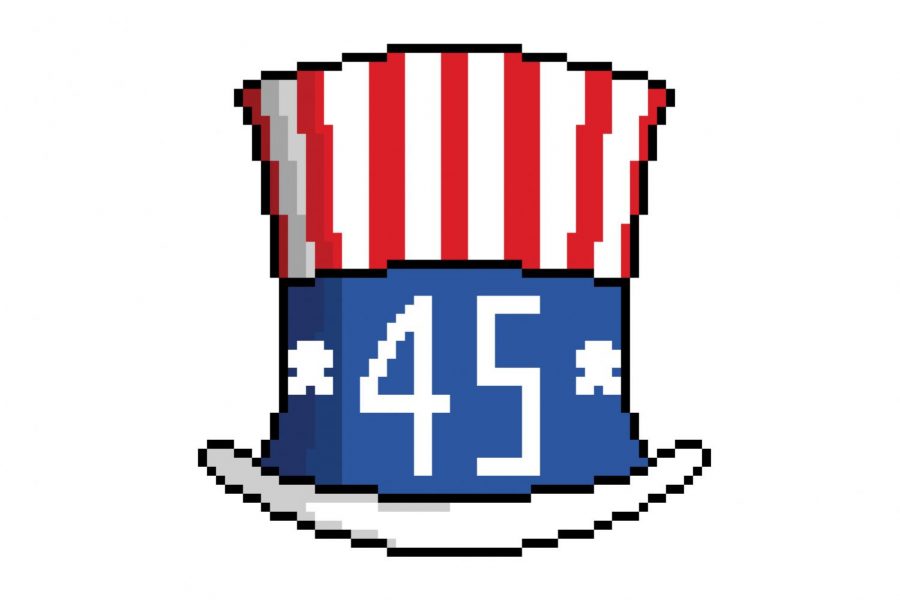 If you’ve ever wanted to see Jeb and George W. Bush engage in a dance battle for the opportunity to become president, then “45 Plays for 45 Presidents” is the show for you. In a play unafraid to discuss the darker sides of presidential lives, this play aims to present the whole truth to the audience, allowing them to feel how they want to feel about our leaders past and present.

As the name suggests, the show is made up of 45 separate plays, one for every American president. This only leaves a handful of minutes for each and lends itself to a rapid pace embraced in the play’s structure.

Derek Jones, a third-year theatre major, worked as the sound designer for the play and talked about the importance of making the play a coherent piece.

“I think the biggest challenge was as the name suggests 45 different plays, and what that can turn into is a hodgepodge mess if we didn’t make it feel cohesive,” Jones said. “So we did that by trying to make everything feel like it belonged where it did by providing a bit of a through-line.”

The play covers a lot of ground as it tries to process what it means to be an American President and what that says about us as a people. The show ranges from highly dramatic moments like the assassination of John F. Kennedy to the absurdity of Howard Taft being treated like a baby. This take on history is far from the typically dry manner of the school subject, and offers a truly new outlook on the material.

It is also extremely relevant to modern-day politics, with the last microplay focusing on Donald Trump. While the rest of the play is not overtly partisan, the last play was an exception, in which the liberal views of the cast and director came out.

The play asks the questions: who do we want to be as a nation? Are we as a country more than just the people that lead us? The play starts and ends with the voice of God asking the audience these important questions, but does not give them a clear answer.

It is also one of the more daring performances from a technical standpoint. During each play a picture of the president the cast is portraying is projected. This is done in order to give the audience context for the performance since the cast is quite small, at just seven actors to play all the roles.

Chris Horton, a second-year cell and molecular biology and theatre double major, talked about the struggles of getting all of the plays together in a way that makes sense.

“It’s a real stretch of the skills of the whole cast, to be able to switch between the different characters,” Horton said. “I think that it works so well because we wanted each play to have a unique theme to them, so it’s a lot of technical work for the production team too.”

The play has music in between each scene to set the mood of the era, but it also includes videos of Seattle University faculty remembering the John F. Kennedy assassination as well as a display of Donald Trump’s tweets.

A surprising inclusion into the play was the Trump impeachment, which happened while the play was being rehearsed. The ending of the play was put together personally by Jane Nichols, a theater professor at the University of Washington and guest director for the play, in the hopes of conveying a message about what it means to be president.

“We actually got the script for Trump in the last week before the show was put on,” Nichols said. “But the original script was a little less vocal about its feelings on the president. We decided we need to have something to say, that we couldn’t just be objective or else what’s the point.”

“This is not a finger-wagging lecture about when America was ‘bad’ or ‘good’ it’s just a series of stories that want you to ask ‘who are we,’” Nichols said. “The show ends fairly bleakly, but it’s not the real end of the story of this country. The real end is when we stop asking ‘who are we’ and we just give in to being told who we are.”