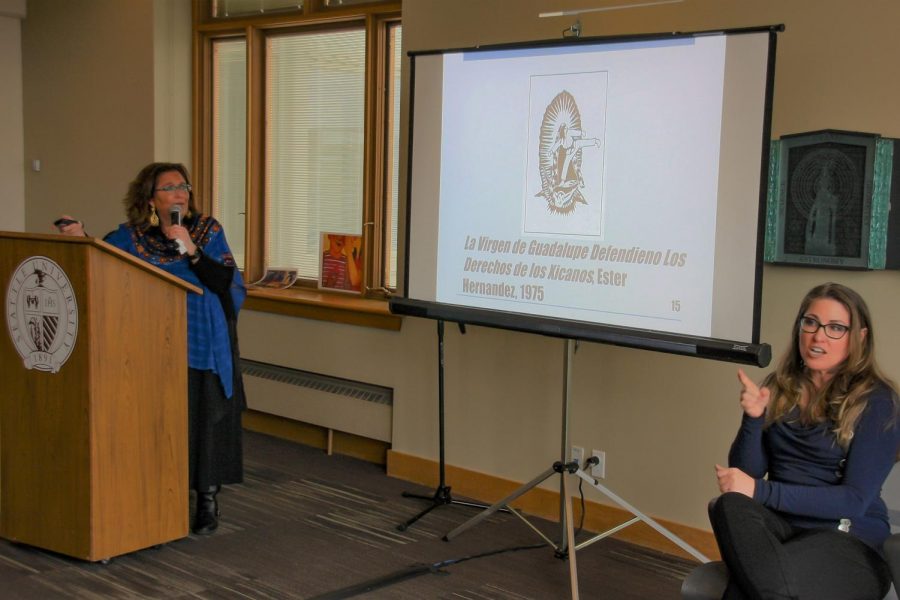 “There’s a real issue when people hear Gloria Anzaldúa, everybody quotes her but they don’t really know what her work is about. That’s what I wanted, for people to know more about Anzaldúa, since her work has become interdisciplinary” Gabriella Gutiérrez y Muhs said. “After she died young, people started appropriating her work and quoting her. Now we have a massive amount of Chicana and Latina theorists who are alive and not quoted who have done important work as well.”

Gutiérrez y Muhs, a professor of modern languages and woman and gender studies and Theilene Pigott McCone Chair organized the Mind and Body symposium. The symposium was a one day conference featuring Seattle University alumni, students, professors in conversation with internationally renowned poets, writers and academics.

The event primarily focused on addressing the “Other” within LGBTQ+, Latinx, and migrant communities. Additionally, the entire event was translated by two ASL interpreters.

Panelists spoke in many contexts throughout the course of the 12 hour event about the work of Gloria Anzaldúa, Xicanisma and other Chicano authors. Gutiérrez y Muhs specifically noted the dangers of tokenizing one voice when discussing the works of minority authors.

The first quarter of the event was devoted to educating the audience on who Anzaldúa was and what her book represents. Gutiérrez y Muhs shared that her goal is to quote women of color because she believes it isn’t done enough.

Gutiérrez y Muhs also called on the power of the university to unify as a community in a world where communities of color and impoverished communities are still marginalized.

“We need more than the choir to attend these events” Gutiérrez y Muhs said, calling for more recognition of Latinx scholarly and literary works. “We have all these jewels here, and they’re not valued. There’s a lot of danger with tokenism in that we’re excluding other people.”

Nalini Iyer, who teaches courses in Postcolonial Literatures as a professor of English, spoke to the context of the event and about the work of Gutiérrez y Muhs, as a widely known scholar and poet.

One panel showcased five alumni who had graduated within the last two decades years ago, as they spoke about what it was like to be a student at Seattle U.

These individuals came from immigrant backgrounds—one was a mother, another person was first-generation—and they talked about what was missing here, as well as what they found in classes and with other faculty of color.

“It was very much a panel about testimonies and people sharing their life experiences,” Iyer said.

Carmen McCoy, a senior political science major, is in Gutiérrez y Muhs’ women and gender studies senior seminar course. McCoy commented on how she felt throughout the event.

“Really they’re talking about going beyond Gloria Anzaldúa and her work. Though obviously amazing, they want to explore what Chicanas have done throughout the past couple years, and the ways that we’re theorizing and trying to create more inclusive spaces in Seattle and all around,.” McCoy said.

McCoy agreed with the alumni speakers who noted the elements of Seattle U that could change for the better, specifically regarding mentorships with upperclassmen.

“I think that it’s really hard sometimes in a smaller school to get outside of your class., I think underclassmen would really value having an upperclassman to kind of guide them through some things they might not fully understand. They spoke a lot about that, and I definitely agree with them. And, more representation of professors of color and faculty of color, and just beyond the identities we usually see in academia.”